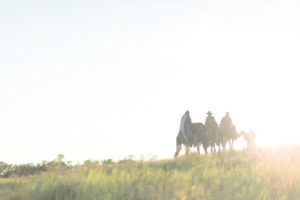 Wherever the Patriarchs had a significant encounter with God, they gave that place a name. Some of the names are familiar, such as Jacob’s naming of Bethel (= house of God) after his dream of a ladder (Gen 28:10-22), or his naming of Peniel (= face of God) after his wrestling match (Gen 32:24-13).

But others are not so familiar. We tend to gloss over another God-encounter in Gen 32:1-2: “So Jacob went on his way, and the angels of God met him. When Jacob saw them, he said, ‘This is God’s camp.’ And he called the name of that place Mahanaim.”

We forget Mahanaim. Yet this experience probably determined the literary structure of the last 14 chapters of Genesis. What could Mahanaim have meant for Jacob? For Joseph? For us?

This point in Jacob’s life occurred between conflicts. He had settled the one with Uncle Laban (Genesis 31), but would soon meet Brother Esau and the 400 men coming with him (Gen 32:6). So when God gave Jacob the experience of Mahanaim, he learned the two-camp perspective.

His family’s camp was not alone. God’s camp surrounded his. Jacob had God’s presence, protection, and promises for whatever the future held. Surprisingly, the meeting with Esau resulted in reconciliation, not confrontation.

Did Joseph have the two-camp viewpoint? Interestingly, his life story is told from Genesis 37-50 as a series of twos.

Chapter 37 begins with two occasions of trouble between Joseph and his brothers (the bad report to Jacob, and Jacob’s favoritism which caused the brothers’ hatred).

Jacob gave two instructions to Joseph when sending him to his brothers.

And the brothers devised two plots to get rid of him—death or deportation.

The next two chapters (38-39) present two accounts of sexual temptation—Judah gave in but Joseph did not.1 Mrs. Potiphar even falsely accused Joseph twice.

Need I mention how many sons Joseph had?

In chapters 42-44 the brothers came to Egypt to buy food two times, and Joseph tested them by returning their money both times.

Chapter 47 tells about Joseph providing for his family’s welfare and also for the nation’s welfare during the famine. Jacob blessed Joseph’s sons, and then he blessed all his sons (Genesis 48-49).

Why might God have used dualism as the distinctive literary structure for Joseph’s life? Could this unique pattern showcase the importance of Mahanaim?

The answer may lie with the city of Dothan, meaning “two wells.”

Dothan appears only twice in Scripture—with Joseph in Gen 37:17 and with Elisha over one thousand years later in 2 Kgs 6:13-17.

Elisha had witnessed “God’s Camp” as the supernatural chariots and horsemen of fire taking Elijah to heaven (2 Kgs 2:11-12). So when a strong enemy force surrounded Elisha’s hometown of Dothan to capture him, he told his servant, “Those who are with us are more than those who are with them.” God opened their spiritual eyes and they saw God’s army camping around the city of Dothan to protect them.

Could it be coincidence that Dothan was where Joseph’s brothers had put him in a pit, plotted to kill him, and sold him into slavery, exiling him to a foreign country? His adversities had started in Dothan. Perhaps God recorded Joseph’s life dualistically to help us remember something important about our Dothan-like struggles: Mahanaim, the reality of two camps.

You may only be able to feel the pit, or see prison walls, or dread the enemy at your door, but God has the satellite view of your location and destination. Reversals, road blocks, and detours all advance your spiritual journey when accepted as God’s assignments. Keeping God’s camp in mind helps you view your earth-camp with heavenly perspective.

Joseph looked beyond his brothers’ mistreatment to remember3 a powerful truth. Four times in Genesis 39 the text states, “The Lord was with him,” while describing Joseph as a slave and a prisoner.

After thirteen years of adversity, he stood before Pharaoh (who considered himself a god) and referred to “the God” five times. Then this ex-con boldly offered Pharaoh advice! Soon Joseph faced a new set of problems—ego-popping power and the stress of managing a nation’s economy during famine.

Nine years into his rule, Joseph suddenly confronted his past. His ten brothers bowed to him. Joseph may have thought God was giving him the perfect opportunity for justice, and what we refer to as closure. His life verse must have been Gen 50:20, “You intended to harm me, but God intended it for good to accomplish what is now being done, the saving of many lives” (NIV).

From ages 17 to 30, Joseph had lived in the camp of “You intended to harm me.” He survived and even thrived because he stayed aware of the other camp: “God intended it for good.”

Derek Kidner states, “This biblical realism [is] to see clearly the two aspects of every event—on the one hand human mishandling…on the other the perfect will of God—and to fix attention on the latter as alone being of any consequence.”4

In his human camp, Joseph was a victim of his brothers’ wickedness, Mrs. Potiphar’s lust, and the butler’s memory lapse.

But with Mahanaim in mind, his life’s drama was God’s story, and Joseph played his part with integrity. In the pit he gained humility.

As Potiphar’s slave he learned to run a large household, handle money, and resist sexual temptation.

Prison taught him to manage difficult people. And patience came during the butler’s two years of forgetfulness.

This God-designed training program landed him in the palace, where he saved the world during famine (Gen 41:57) and preserved the family of Israel.

Likewise, God’s training regimen for you involves a tale of two camps.

God uses even the evil intentions of others to develop you into the image of Christ and prepare you for service, when you submit and let perseverance finish its work.

Like Jacob, Joseph, and Elisha, you live in Mahanaim.

The co-existing physical and spiritual realms work together to accomplish divine purposes, whether your circumstances involve a pit, a prison, or a palace.5

Marcia Hornok is the managing editor of CHERA Fellowship, a quarterly print magazine for people who have been widowed. Her articles have appeared in 70 different markets, in a dozen devotional books, and in the Journal of Dispensational Theology. She is the wife of a retired minister and mother of six.

1. Chapter 38 is more than an interlude. Its juxtaposition with chapter 39 invites several comparisons and contrasts between the players. For example, Tamar showed evidence, giving Judah a choice—he could lie and have her killed, or confess, which he did. On the other hand, Mrs. Potiphar had false evidence and lied, but Joseph had no choice.

2. Amplified from David A. Dorsey’s synopsis in The Literary Structure of the Old Testament (Grand Rapids, MI: Baker Academic, 1999), p. 59.

3. The first person in Genesis of whom it was said that God was with him was Ishmael (21:20). Joseph’s caravan ride to Egypt with his distant cousins the Ishmaelites makes one wonder if they discussed details of what we know as Genesis 21. If so, Joseph could identify with Ishmael, who was loved by his father but because of sibling conflict was cast out of his home around the age of 17; yet God was with him.