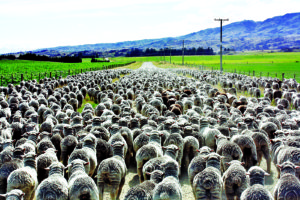 Having grown up in a church where grace was preached, it was natural for Mary to believe one is saved by faith alone in Christ alone. As she got older she became aware that not everyone shared that understanding of the gospel. As Mary’s awareness grew, it became clear that the Free Grace position she had always accepted as true was in fact a minority view, even among Evangelicals. Some opposed the grace position, even railing against it. Others simply garbled the gospel, sometimes speaking of grace while at other times speaking of commitment.

No one wants to be in the minority. The mainstream is much more appealing. From time to time Mary would wonder, “Have I been taught the gospel correctly? Can a minority be right?” At such times she would open her Bible and read treasured gospel texts and be reassured that the Word of God indeed proclaims grace. It was, for her, an inescapable conclusion.

GES represents a minority understanding of the gospel. This is true not in regard to the content of the gospel so much—which is that Jesus Christ died for our sins and was raised for our justification—but in regard to what constitutes a saving response to that gospel message. Mainstream Evangelical thought views some form of commitment as required in a saving response to the gospel as well as some sort of visible (measurable?) transformation in the life of one who is truly redeemed. This transformation would then serve the purpose of distinguishing genuine Christians from people who only think they are Christians and from others who seek to deceive regarding their spiritual condition.

The Free Grace position holds that commitment is not required for salvation. Salvation is a free gift to be received by means of faith (trust, reliance) in Jesus Christ. There are no strings attached.

Regarding what happens after the reception of this most precious of gifts, the Free Grace position maintains that spiritual growth and maturity constitute the divine expectation. Continuance in sin, failure to grow, and disobedience are not permissible, but they are possible, tragically possible. But growth is not guaranteed. Spiritual progress to maturity is not inevitable. Observing another person’s life to determine that individual’s spiritual condition is unreliable at best, and sinfully judgmental at worst. Seeing the Spirit’s work in our own lives is cause for praise and can have a confirming value for us. But even that is an unreliable guide to personal assurance of salvation. What happens when I fail or when I don’t feel spiritual? Assurance of salvation comes from the sure promises of God’s Word and not from feelings or even from the observance of fruit in one’s life. Those who believe in Jesus Christ have eternal life. If I believe, I know that I have eternal life. Assurance is simply taking God at His Word.

Are Numbers Evidence of Truth?

But can a minority opinion really be correct? The validity of a doctrine is determined by its support from Scripture, not by the number of supporters it has.

This illustration is admittedly ludicrous. But is that not basically what many do when they imply that someone cannot be right because most of the Church believes differently? What most Christians or scholars believe is not the deciding factor. What matters is what the Bible teaches.

An illustration of the penchant for appealing to the majority opinion may be found in an article by Dr. S. Lewis Johnson, Jr. in the September 22, 1989 issue of Christianity Today. In the article, entitled, “How Faith Works,” Dr. Johnson appeals to the Westminster Confession of Faith as “a standard of reference that evangelicals as a whole will accept in the main.” The Westminster Confession of Faith is a venerable document, a model of theological insight. But it is a human document. Dr. Johnson cites numerous verses from the Bible but exegetes none. The Westminster Confession is his “standard of reference”; the Bible is used as support. The inverse of this would have been a far superior approach.

Who is right? Who is wrong? Let this much be affirmed, the answer is in the Bible.

Alfy Austin is the Pastor of World Gospel Church in Terre Haute, IN.

*This article appeared in Grace in Focus in December of 1989.