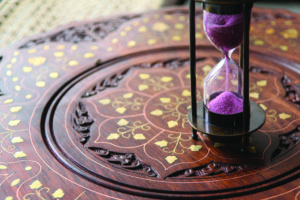 In the middle of His Olivet Discourse, Jesus Christ made this astonishing statement: “But of that day and hour no one knows, not even the angels of heaven, but My Father only” (Matt 24:36). Though it is clear that Jesus had been speaking about prophetic events, He unexpectedly used the phrase “that day and hour,” which had never been used before in Scripture.

The phrase “that day” was very familiar in the OT, being used 110 times in the Major and Minor Prophets. But the full expression “that day and hour” was never used in the Prophets.

Of course, “that day” is an abbreviation for the fuller expression “the day of the LORD,” which occurs 21 times in the prophets.

But “that day and hour” is never found in the OT. In fact, it is found only in two places in the NT; here and in Mark 13:32 (a parallel passage to the above).

“Watch therefore, for you do not know what hour your Lord is coming” (Matt 24:42, emphasis added).

“Therefore you also be ready, for the Son of Man is coming at an hour you do not expect (Matt 24:44, emphasis added).

“The master of that servant will come on a day when he is not looking for him and at an hour that he is not aware of” (Matt 24:50, emphasis added).

“Watch therefore, for you know neither the day nor the hour in which the Son of Man is coming” (Matt 25:13, emphasis added).

There are several things that seem apparent from the context: Jesus was speaking of the beginning of the Day of the Lord—a subject which had never been spoken of before in the Prophets. And He is very concerned that believers remain watchful for His coming.

Also, the context shows that believers who are not watching for His return will not be rewarded at that time. Note, for example,

“Who then is a faithful and wise servant, whom his master made ruler over his household, to give them food in due season? Blessed is that servant whom his master, when he comes, will find so doing. Assuredly, I say to you that he will make him ruler over all his goods. But if that evil servant says in his heart, ‘my master is delaying his coming,’ and begins to beat his fellow servants, and to eat and drink with the drunkards, the master of that servant will come on a day when he is not looking for him and at an hour that he is not aware of, and will cut him in two and appoint his portion [inheritance] with the hypocrites. There will be weeping and gnashing of teeth” (Matt 24:45–51, emphasis added).

In fact, the parable given after Matt 25:13 above also concerns the Judgment Seat of Christ and rewards (or lack of rewards) for the believer. For example,

“After a long time the lord of those servants came and settled accounts with them. So he who had received five talents came and brought five other talents, saying, ‘Lord, you delivered to me five talents; look, I have gained five more talents besides them.’ His lord said to him, ‘Well done, good and faithful servant; you were faithful over a few things, I will make you ruler over many things. Enter into the joy of your lord’” (Matt 25:19–21, emphasis added).

It is obvious that God is not revealing to mankind (or to the devil) the hour of Jesus’ return (which we usually refer to as the Rapture, based on 1 Thess 4:15-18). The beginning (i.e., hour) of Jesus’ Second Advent is imminent, and therefore we are commanded to watch. Not to watch is to be disobedient to our Lord’s command and also to not be rewarded at His coming. I believe that it is significant that twice in this context Jesus spoke of the possibility of not reigning with Him as a consequence of not being prepared for His Second Advent (Matt 24:48-51; 25:26-30).

This does not mean that the unprepared believer will not be raptured (cf. 1 Thess 5:10; even believers who are not watchful will forever be with the Lord), but rather it means that he will not rule with Christ in the life to come.

Do not become complacent

I think it is easy in 2018, almost 2000 years after Jesus’ statements here, to get complacent about His command because we think that His coming is not really imminent. It seems very easy to put other things above the priority He gives us of looking for His return. But that is to produce a slackening in holiness (as was the case of the unfaithful servant above) and loss of rewards at Jesus’ return.

As for me, I want to reign with Christ in His kingdom, and I don’t want to lose reward at the Bema.