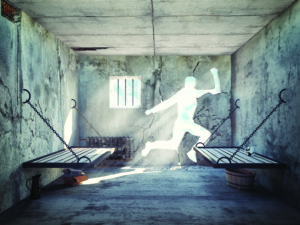 Acts leads all NT books in recording prison escapes (Acts 5, 12, 16). And all the rules for a prison escape are violated. For example, in Acts 12:

1. Light illumines their escape (v 7).
2. Peter is awakened, not by a whisper, but by a blow to his side (v 7).
3. He is told to “Arise up quickly.” This could have jerked the guards awake, but Peter’s chains fall off instead (v 7).
4. They do not escape in haste. Instead, Peter is to dress fully (v 8).
5. They simply walk past the sentry posts and approach a gate to which they have no key.

The result? They defied the possibility of being seen, or of being blocked by the gate, and succeeded in escaping (v 10).

God’s Will Is Supreme

God rides roughshod over Herod’s maximum security arrangements. He treats them as though they did not exist (perhaps he knew of the escape in Acts 5). Human efforts to hinder God are always equally vain and amount to nothing.

Perhaps Herod’s success in the murder of James (v 2) emboldened him to suppose he could do likewise with any servant of Christ. But God’s will, not man’s, is supreme in what becomes of His servants. God may deliver one servant to death (and thus fulfill His own prophetic Word), while another He may deliver “out of the hand” of rulers and “from all the expectation of the people” (cf. v 11).

This story demonstrates it is not “the hand” of Herod or earthly authority that prevails, but the hand of the Lord; not “the expectation” of the people, but the purpose of God.

Our times are in His hands.

The Prison Escape as Typology

Peter slept. This was an act of courage. Peter must have felt sure, especially in light of Christ’s prophecy (John 21), that this was the night before his death. (In James’ case, prophecy fulfilled.) But it was not his time.

In type, however, the believer captured by Satan is often asleep as well (cf. 2 Tim 2:25, 16). They may not be merely awakened by the light of divine truth or the spoken Word alone (cf. v 7). The Lord may find it necessary to “smite” them in chastening. The captured believer is chained by the twin guards of “sin and death” (cf. Rom 8:2). But the proper response to truth causes these chains to fall off (cf. vv 6 and 7). Satanic sentinels must watch helplessly as the believer passes out into spiritual freedom (vv 6, 10).

Hence, there is a second prison escape here, in type (cf. the concept of “awaking” in Rom 13:11-14 and Eph 5:14). The story pictures a prince of this world (Herod) laying hold of a believer (Peter) to deprive him of liberty until the day of his death. Hence, it depicts the Prince of this world (i.e., Satan) in his effort to deprive believers of their liberty in Christ until the day they die.

Before emerging into the pathway of Christian living, the believer should gird himself (with truth), bind on the sandals of the preparation of the gospel of peace, and put on the still spiritually fashionable garment of the Lord Jesus Christ (Ephesians 6; Rom 13:14; cf. Acts 12:8).

There remains, then, only to respond to the Lord’s voice, “follow me” (cf. v 8). He leads us forth into His freedom. (The “angel of the Lord” is the Lord’s representative. Thus typically he shows what the Lord Himself does.)

We may imagine barriers and obstacles to our walk in freedom, but the “iron gates” of circumstances automatically open when we are following the Lord (v 10). Such an experience may seem too wonderful to be true, at least at first (v 9). Peter thought he saw a vision, a revelation of God. In type, we see one, too.

Freedom for the Child of God

Peter’s escape shows us that, for the child of God who is snared and captured by the enemy, there is freedom. The Lord desires to awaken us, give us light (cf. v 7 and Eph 5:14), cause the chains of sin and death to drop off, clothe us with His own character (Rom 13:14), and lead us forth from the prison house of the “authority of darkness” (cf. John 8:34-36).

Zane Hodges was a Bible teacher and Professor of Greek at Dallas Theological Seminary. He passed away in 2008.