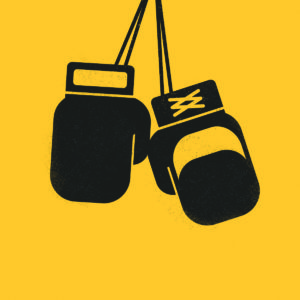 In 1 Tim 6:12 Paul writes, “Fight the good fight of faith, lay hold on eternal life, to which you were also called and have confessed the good confession in the presence of many witnesses.”

Why does Paul call it the good fight of the faith? And to what is he referring here?

The Greek word translated “fight” is agōn, which refers to a contest or conflict and often occurs in the NT. Agōn is the root from which we derive English words such as “agony,” “antagonist,” “protagonist,” “agonize,” etc.

In antiquity an agōn was originally an assembly of the Greek people for athletic contests like the Olympic or Pythian Games. With the passage of time, the term began to metaphorically refer to not just the assembly, but the athletic contests themselves.

In the NT, agōn is used to indicate physical persecution encountered in proclaiming the gospel: “But even after we had suffered before and were spitefully treated at Philippi, as you know, we were bold in our God to speak to you the gospel of God in much conflict [agōn]” (1 Thess 2:2).

In Heb 12:1 it is used in the sense of an athletic contest:

Therefore we also, since we are surrounded by so great a cloud of witnesses, let us lay aside every weight, and the sin which so easily ensnares us, and let us run with endurance the race [agōn] that is set before us.

We see this use again in 2 Tim 4:7 in which Paul uses the term in reference to a fight, another type of athletic contest: “I have fought the good fight [agōn], I have finished the race, I have kept the faith.”

Why does the Apostle Paul refer to the Christian life as a fight, an agōn?

I think every believer experiences inevitable struggles because of pressure from the world and the sin nature (often in Scripture called the flesh).

Jesus told the disciples, “These things I have spoken to you, that in Me you may have peace. In the world you will have tribulation [lit., pressure]; but be of good cheer, I have overcome the world” (John 16:33).

In Galatians, the Apostle Paul directs attention to the conflict between the flesh and the Spirit within each believer:

So how can we fight the good fight, and why is it called good?

Rely on the Holy Spirit

A clue is found is Col 1:28-29. Here Paul uses the related verb agonizomai to refer to striving in the Christian life: “Him we preach, warning every man and teaching every man in all wisdom, that we may present every man perfect in Christ Jesus. To this end I also labor, striving [agonizomai] according to His working which works in me mightily.” Paul states that he is fighting, or striving, but not by his own power. He is relying on the power of the Holy Spirit.

Paul suggests that the fight will end in victory if we rely on the Holy Spirit:

that He would grant you, according to the riches of His glory, to be strengthened with might through His Spirit in the inner man…Now to Him who is able to do exceedingly abundantly above all that we ask or think, according to the power that works in us (Eph 3:16, 20).

This is similar to what we see in other Scriptures, such as 1 John 4:4, “You are of God, little children, and have overcome them, because He who is in you is greater than he who is in the world.”

The Christian life is a good fight if it is lived by the power of the Holy Spirit, because it is then a victorious fight.

There is another reason Paul gives for fighting the good fight. He says, “lay hold of eternal life to which you were also called” (1 Tim 6:12b).

I think he is referring to the same thing Jesus said regarding His coming to rule over the world: “For many are called, but few are chosen” (Matt 22:14).

All believers are called to rule with Christ, but not all will fulfill that calling. That is, ruling with Christ depends on whether or not we expend the effort to live victoriously through the Holy Spirit until the end. Jesus said in Rev 2:26, “And he who overcomes [or, is victorious], and keeps My works until the end, to him I will give power over the nations.”

The Apostle Paul writes, “If we endure, we shall also reign with Him” (2 Tim 2:12a). In other words, it is a good fight because the goal of ruling with Christ is worth striving for. It is a good fight when we live by the power of the Holy Spirit and continue to endure until the end of our lives (unless the Rapture occurs first). Then we will receive the reward of ruling with Jesus Christ. How awesomely good that is!

There is undoubtedly much more that could be said about 1 Tim 6:12. Furthermore, we have many Scriptural examples of those who have fought the good fight—Jesus Himself, the Apostle Paul, and the heroes of the faith listed in Hebrews 11, for example. We have strong motivations to live by the power of the Holy Spirit, because what is at stake is ruling and reigning forever with Christ.