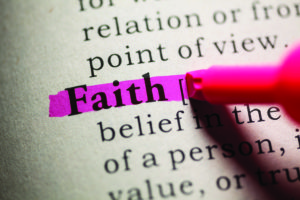 Define Your Terms A friend of mine is a pastor at a large church in Southern California. He was given the task of preaching a sermon on the meaning of faith. As he was gathering his thoughts about how to approach this sermon, he called me and asked to meet to discuss his task.

At our meeting he described his initial thoughts, approach to the sermon, and the Scriptures he was considering. He asked what I thought and my advice surprised him. I encouraged him to begin by defining the term. I said, “If you ask ten different people what faith is or means, you will receive thirteen different answers!” He did not believe me until he actually asked a number of people the question. His brief experiment confirmed the truth of my statement. Consequently, he began his sermon on faith by defining the term.

The Meaning of Faith

Instead of faith being a synonym for belief (and the result of believing, the verbal cognate) it has been redefined to include obedience, commitment, surrender, repentance, and perseverance, among other things.

For example, Lordship Salvation proponents, like John MacArthur, have redefined faith to include a concoction of works, which has obscured the true meaning of the term; i.e. being persuaded that something is true.

MacArthur devotes an entire book, The Gospel According to Jesus, to redefining faith to include things his bias demands. He is not alone in this redefinition.

Why is this important? When a term or a word is redefined, its meaning is changed and its real meaning obscured. As a consequence, you can change outcomes, descriptions, and interpretations that might not otherwise be changed.

We see this in modern culture.

The definition of marriage is currently being redefined. The purpose is to alter the original meaning so that society will accept alternatives to traditional heterosexual marriage and these alternatives will be considered socially accepted and normal.

The Effects of Redefining Faith

So what are the effects of redefining faith in relation to theology?

When a term like faith is redefined, theology is changed and it can have seismic effects on how one interprets Scripture. This is seen in the current Free Grace versus Lordship Salvation debate.

Yet the redefinition of faith has confused and confounded many. It has wreaked havoc on the church leading to many spiritual casualties. How so?

Take the Lordship Salvation redefinition which emphasizes commitment, obedience, submission, repentance, and perseverance as an example. To receive everlasting life under this redefinition one would have to repent of all sins, commit his life to serving the Lord, actually obey the Lord for his entire life, and actually persevere in submission to the Lordship of Christ for his entire life. Who can do any of these perfectly or completely? What happens when one sins? How much commitment, obedience, submission, repentance, and perseverance are necessary? As you can imagine, this redefinition has caused people to lose assurance of whether they have everlasting life, caused hopelessness about their spiritual state, and confusion about Scripture.

As another friend of mine often reminds me, “words mean things!” He is correct. They do! We must be diligent in correctly defining terms and Biblical words so God’s truth will be clear and manifest, instead of confused, obscured, and subject to manipulation.