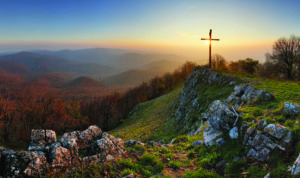 I was talking to a friend about the different views of the atonement in Free Grace circles. We came around to the issue of potentiality versus actuality. What did the cross actually accomplish? What did it potentially accomplish?

I came up with an illustration for the differences of opinion about the atonement that exist in Evangelical circles, especially between Calvinist, Arminian, and Free Grace views.

Snakes in a Mall

Imagine if poisonous snakes escaped from a pet store and bit everyone at the mall. Thankfully, there is a vaccine. It took years of research and millions of dollars, but a vaccine was developed. But who in the mall would get it?

In the Arminian view, the vaccine is available to all, but only believers actually get it.

In my Free Grace view…the story is a little more complicated.

More Than One Vaccine

In my Free Grace view, I have to change the scenario a little.

It turns out, to be cured, you need more than one vaccine.

The first vaccine is given to everyone in the mall, whether he wants it or not.

The second vaccine is only given to people who meet a condition.

And the third vaccine is only given to people who have received the first two and who must also meet two more conditions. 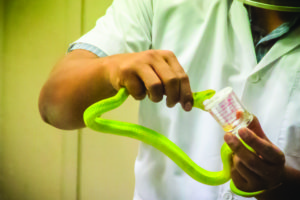 Everyone agrees we’re all sinners (Rom 3:23) and that if something isn’t done, we’ll be lost forever. So Jesus died on the cross for sin. But what did the cross achieve? And who gets the benefits?

Calvinists say there is one big benefit of the cross—i.e., salvation—and only the elect get it.

Arminians say there is one big benefit of the cross—i.e., salvation—and while it is potentially available to everyone in the world, only believers actually get it.

The Free Grace view I defend differs from both.

Where is that in the Bible? Consider—

First, there is the benefit of the removal of judicial condemnation. Jesus took away the sin of the world (John 1:29). He did that for everyone (i.e., the world), not just for some. He did it actually, not potentially. It is a done deal. No one in the world will ever be judicially condemned for sin. Jesus took it away.

Second, there is the benefit of everlasting life. That benefit is only given to believers (John 3:16-18). It is potentially available to all, but only believers get it when they believe.

Third, there is the benefit of ongoing fellowship forgiveness. That is potentially available to all believers, but only those believers who walk in the light and confess their sins will receive that benefit (1 John 1:7-9).

Do you see how this Free Grace view differs from what we’ve inherited from the Reformation?

Do you see how it forces you to go back to the Bible and read it a little more carefully?

I think it is time for the Free Grace movement to rethink the Biblical evidence about the cross’s benefits. We need to ask some basic questions, such as: How many benefits are there? To whom are they offered? Are there different conditions? Are the benefits conditional or unconditional? Permanent or temporary? For this life or the next?

Wouldn’t you benefit from a study of the cross’s benefits?