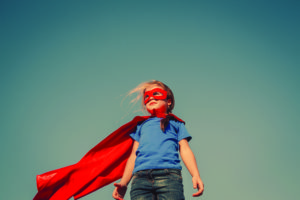 “Black Widow,” I explained to my wife.

“And she’s good with weapons.”

“But she’s fighting hundreds of robots,” my wife noted.

“So Hulk is super strong, Iron Man has his suit, Thor has all kinds of powers, and she’s basically useless.”

“And that guy with the bow? He’s going to shoot his little arrows at all those killer robots?”

I was watching Avengers: Age of Ultron and let’s just say comic books are not my wife’s “thing.”

Unlike Abby—who apparently wasn’t raised to enjoy the finer things in life—I grew up reading comic books. I collected them. I went to conventions. And my best friend Dennis and I would have competitions drawing our favorite heroes—his was Spider-Man and mine was Iron Man. But in my late teens I stopped reading them and moved on to other interests.

My point is, you could say that I’m comic book literate.

Abby, on the other hand, not so much.

However, while I stopped reading comic books years ago, I’ve now come full circle. With all the new comic-based movies and TV shows coming out, and with kids of my own—including a sword-fighting, monster slaying, death-defying, head-bonking two-and-a-half-year-old boy—eager to watch them, I’ve rediscovered my old love! So when I watch the latest comic movie, it’s a very familiar world to me. I can enjoy the shows on a deeper level than my wife can.

I know the characters.

I know the back stories.

And I usually catch the “Easter Eggs.”

An Easter Egg is a very specific, hyper-detailed reference to the comics or to other movies in the same comic “universe.” Directors put them in for fans to recognize. It’s a way of tying the movies together into one big story, and making links to the original comic books fans would have read as kids.

An Easter Egg could be a side comment, like, “I have a colleague who is a pioneer in gamma radiation…” which my wife would not catch, but I would recognize as a reference toBruce Banner, i.e., the Hulk.

Or maybe it’s a song playing in the background that fans will recognize as the originaltheme from the 1960s cartoon.

Or maybe it’s a character who seems unimportant now, like Peter Parker’s science teacher, Dr. Connors, who I know will later turn into a major villain named The Lizard.

Or maybe it’s a prop you only see for a second in the background, like Captain America’s unfinished shield, Robin’s bloodied costume, or a poster with the words “Journey Into Mystery” which my wife may not have even noticed, but which I know to be the titleof the comic where Thor first appeared.

Being comic book literate, and catching the Easter Eggs, makes watching the moviesmore fun. It helps you understand what is going on, and helps you predict what might happen in the future. You feel like you’re part of an inner circle, like you’re in “the know.”

You get the inside joke that others are oblivious about.

I find the same applies to the Bible.

The Bible is filled with Easter Eggs—little details, allusions, and imagery that only the Biblically literate will notice and enjoy.

I’m teaching through John’s Gospel in Sunday school and there are so many references and allusions to the OT it’s been a challenge to help the class see those connections for themselves.

We began by comparing John 1 and Genesis 1, seeing how both John and Moses wrote about beginnings, creations, God’s words, light, and darkness. But they wrote about them in subtly different ways.

We noticed that John’s description in v 14 sounds an awful lot like an allusion to the wilderness Tabernacle, made of animal skins, and containing God’s glory, except now the Word became flesh, “tabernacled” among us, and was filled with glory.

Seeing the Tabernacle reference in v 14 made better sense of why John suddenly compares Jesus with Moses in v 17. You might think John is abruptly changing subjects, but once you’re thinking about the old Tabernacle—which contained the Ark, which contained the Law—it makes perfect sense for John to continue the contrast and say that while the Law was given through Moses, Jesus realized grace and truth in Himself. In other words, Jesus embodied a better message than Moses.

And then, when the Gospel goes on to talk about John the Baptist, instead of it being another abrupt change, you begin to realize it fits with the rest of chapter 1. Why?

John declares he was preparing for the coming of the Lord, or as the original Hebrew says, for the coming of YHWH. Could that imply the Messiah was God incarnate? That certainly fits with the idea that the Word was God (v 1) and created everything (v 3).

And John the Baptist fits the contrast between Moses and Jesus too.

You’ll recall that John’s father was an Aaronic priest, and that John’s birth was announced by an angel in the Temple, while his father was serving (Luke 1:5-13). And while John did spend his life serving God, it was not as a Temple priest, but in the wilderness, just as Aaron had. In fact, he called people out of Jerusalem, across the other side of the Jordan, in a symbolic state of exile (v 28). The anti-Temple subtext of John’s actions evidently caught the attention of the Temple authorities which is why priests and Levites—John’s extended family, and the people he should have served with—were sent to question him (v 19).

And when the Baptist twice declares that Jesus is the Lamb of God who takes away the sins of the world (vv 29, 36), it’s as though, even though he did not serve in the Temple in Jerusalem, John nevertheless fulfilled his high priestly calling by pointing Israel to the true Lamb of God, the better sacrifice, the One Who would actually accomplish what the Mosaic sacrifices pointed to in a typological way.

My point is, all those seemingly disjointed pieces of John 1 actually fit together, and you can notice the inner logic of it, if you’re Biblically literate.

But if you’re not Biblically literate, while you could still read John 1 with profit, it will be harder to follow the inner logic of his writing. You’d miss much of what John is trying to convey.

Put in popular terms, the Bible is full of “Easter Eggs.” And when you’re literate enough to spot them, you can enjoy Scripture at a deeper level than if you were just skimming its pages for a good story.

But becoming Biblically literate doesn’t happen automatically, and it probably won’t happen simply by attending church every Sunday. You have to put in the time and effort to read and study the Bible for yourself. And when you do, you will find it amply rewarding. It doesn’t take any superpowers to do it, just a little discipline.

Shawn Lazar is Director of Publications for Grace Evangelical Society. His book, Beyond Doubt: How to Be Sure of Your Salvation is coming soon. Real soon. Hopefully by the April 2017 Conference.