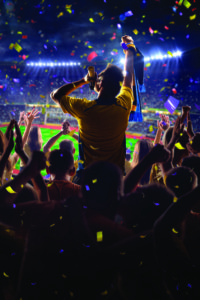 I enjoyed spirit week at my high school, just like every other kid does across America.

Our rival was Lawrenceville, a grotesque place just across the New Jersey state line, so we had more than the typical rival history between us.

Their school colors were red and white, ours blue and grey.

New Jersey—a place packed with people, most of whom simply got lost in their desperate attempt to flee the state.

Lawrenceville had admitted girls years ago, and we were still all boys.

This New Jersey spawn matched its state with an overblown campus and student body in the thousands—and it was about to descend on our rural hilltop retreat, home to a mere 400 boys.

Friday night finally arrived. We, the audacious underdogs, prepared to compete on the athletic field. We lit the bonfire and stripped to our underwear in a scene part Lord of the Flies, part barbarian horde, part highland charge. We painted ourselves in school colors and chanted with a fierceness of our future years, “What do we eat? Red Meat! How do we eat it? Raw!”

We call such events “spirit week” because they rightly capture the idea of embodying the spirit, identity, and the resulting pride.

There was not an item of red to be found on any of my classmates that weekend—we were blue and grey all the way (actually, we really never wore red at all).

And there was a common shared identity among us. We all studied at the same library, worried under the same tough teachers, goofed off under the same easy ones. We ate the same food, sat in the same classes, played on the same teams, walked among the same buildings, and were products of the same history.

Part of this shared identity was an almost unspoken code of behavior, a code of ethics. It wasn’t what you would call a Biblical morality, but it was a code all the same. And that weekend, we were, each one, an individual embodiment and representative of what it meant to be a member of the Hill School. 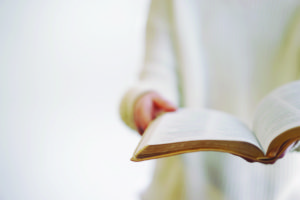 Led by the Spirit

When the Bible talks about walking by the Holy Spirit (Gal 5:16, 25), or being led by the Holy Spirit, there are some striking similarities and contrasts. First the similarities. The Holy Spirit resides in every person who has believed in Jesus for eternal life. That person is part of something far greater than any other family or organization—the Bible simply calls it “the Church.” Each believer is to be an individual embodiment and representative of the Holy Spirit—that is, we are to behave according to His ethic (the Holy Spirit is a “He” not an “It”).

We are to be submitted not only to the individual leading of the Holy Spirit, but also to the bigger organization that the Holy Spirit has encompassed—the Church.

We are also pitted in fierce and brutal battle against a foe set on our destruction as Spirit-indwelt ones.

But there are also some awesome differences.

I never made varsity soccer, so my skills didn’t really matter. The real game took place on the field in the center of campus. I was off in the practice fields.

I remember feeling out of place. I really wasn’t going to be able to do much for my school. I chanted, but not with the same vigor that some did. I held back. I wasn’t a headliner of the school. There were more impressive boys for the spotlight. I felt, under my blue and grey exterior, that I was lacking the embodiment of the Hill School. And with all that was going on in my life, I probably was.

Handing Over the Reins

The Holy Spirit works on a different principle. He lives in the interior (1 Cor 3:16). His work is in the interior, and the exterior is simply the symptom of what He has accomplished inside.

The fears that we don’t have what it takes, that we are insufficient for the task, that we are less than the headliners—these all dissipate when we come to grips with the awesome reality that God—the One who created the universe—resides in us and He is sufficient for all.

He has what it takes, He is The Headliner.

This is walking by the Spirit.

It is handing over the reigns, including our fears, hungers, and passions to God, resting in Him to provide, to sustain, and to validate us, as we follow Him, or “ride the Wind” as one of my mentors put it.

And He does. He speaks to us—not audibly, but through His Word as He points out a verse and says, “This is for you; dwell on it.” He speaks through other believers as they encourage or reprove us, and He says, “take this to heart.” And He speaks to us through life circumstances, as He reveals a sunrise as not just another day, but a beautiful gift from the good and loving hands of our Father. He is a person, and He expects us to know His voice and enjoy communion with Him.

Thankfully this does not involve bonfires and underwear (we are not that kind of church), and its duration is a lifetime, not a week.

Nate Stevens is pastor of The Bible Chapel, Rostraver Campus in Rostraver, PA.