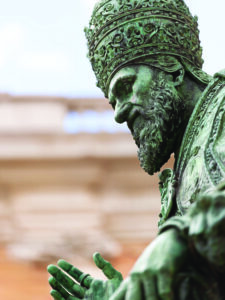 “But when Peter was come to Antioch, I withstood him to the face, because he was to be blamed” (Gal 2:11).

Although this verse seems rather inconspicuous, it is actually one of the most significant verses in the New Testament. This is not to say that Paul meant it to be so when he initially wrote it, for he could never have imagined how things developed in church history after his death. But for that matter, neither could any Christian in the early church have ever imagined what nowadays passes for Christianity or a church.

In the Pauline Epistles, Peter is only mentioned in 1 Corinthians and Galatians. His name appears six times in Galatians chaps. 1-2 (1:18, 2:7, 8, 9, 11, and 14). Although he is only referred to as “Cephas” on one of these occasions (Gal 2:9), most modern versions (CSB, ESV, HCSB, NASB, NEB, NET, NRSV, REB, RSV) change the name “Peter” to “Cephas” in three places (Gal 1:18, 2:11, 14), following the NA/UBS critical text. Some modern versions (CEV, GNT, NIRV, NLT) read “Peter” in all three places, following the KJV, NKJV, Majority Text, and the Textus Receptus. The early editions of the New International Version (NIV) read “Peter,” but the latest edition (2011) reads “Cephas.” The Roman Catholic Rheims New Testament (1582) reads “Peter” in Gal 1:18, but “Cephas” in the other two places. Modern Catholic Bibles like the New American Bible (NAB) read “Cephas” in all three places.

Why were these verses changed early in church history?

Before launching into a discussion of justification by faith, Paul recounts to the churches of Galatia some events that transpired in his dealings with the other apostles because it is relevant to his discussion of justification. We are told here that Paul not only “withstood” Peter “to the face,” but that Peter “was to be blamed.” Whatever Peter did, it was not only wrong, it was his fault. The next verse gives the reason why Peter “was to be blamed.” What should be noted here, however, is the fact that Paul “withstood him to the face.” What is so profound about this statement is that Peter, according to the Roman Catholic Church, was the first pope—the bishop of Rome, the vicar of Christ, the head of the church.

According to the Catechism of the Catholic Church:

The Lord made Simon alone, whom he named Peter, the “rock” of his Church. He gave him the keys of his Church and instituted him shepherd of the whole flock. The office of binding and loosing which was given to Peter was also assigned to the college of apostles united to its head. This pastoral office of Peter and the other apostles belongs to the Church’s very foundation and is continued by the bishops under the primacy of the Pope.

The Pope, Bishop of Rome and Peter’s successor, ‘is the perpetual and visible source and foundation of the unity both of the bishops and of the whole company of the faithful.’ For the Roman Pontiff, by reason of this office as Vicar of Christ, and as pastor of the entire Church has full, supreme, and universal power over the whole Church, a power which he can always exercise unhindered.

For anyone to withstand a modern pope “to the face” would be unthinkable. Yet, this is exactly what Paul did to Peter, supposedly the first pope. So as John Calvin said: “And here the Roman Papacy is struck down by another thunderbolt.”1

So how does changing Peter’s name to Cephas solve the problem? Is not Peter also called Cephas (Gal 2:9)? Yes he is, but since Peter is rarely called Cephas, it is easier to invent another person named Cephas than it is to invent another person named Peter. And this is exactly what some of the church fathers did. They made another disciple named Cephas one of the seventy that Christ sent out (Luke 10:1). Therefore, the Cephas that Paul rebuked was not the Apostle Peter.

What’s in a Name?

If Peter and Cephas are the same person, what of the variation in names in Galatians 2? In Mark 3:16-17, the Lord Jesus surnamed Simon with the name of “Peter”; James and John he surnamed “Boanerges.” Peter’s original name was Simon, the Greek form of the Hebrew Simeon. Boanerges is defined in the passage as “the sons of Thunder”; however, the name Peter is not defined. Although some claim that the name Peter means “rock,” this is based on a false reading of Matt 16:18, which says: “And I say unto thee, That thou art Peter, and upon this rock I will build my church; and the gates of hell shall not prevail against it.” There are four reasons why Peter could not be the rock: 1. In John 1:42 Peter was surnamed Cephas (the Aramaic form of Peter), then Cephas was defined as “a stone,” not a rock. 2. In 1 Cor 10:4, Christ is said to be the rock. 3. In John 2:9-21, the similar phrase “this temple” clearly refers to Christ. 4. According to Matt 16:23, if your church is built on Peter then it is built on someone prone to error.

So why the variation in names? Could it be purely stylistic?

If there is any doubt at all that the variation in names in Galatians 2 is purely stylistic, then one should consider the account of Jesus Christ when He was addressing Peter:

And the Lord said, Simon, Simon, behold, Satan hath desired to have you, that he may sift you as wheat: But I have prayed for thee, that thy faith fail not: and when thou art converted, strengthen thy brethren. And he said unto him, Lord, I am ready to go with thee, both into prison, and to death. And he said, I tell thee, Peter, the cock shall not crow this day, before that thou shalt thrice deny that thou knowest me (Luke 22:31-34).

So, if Paul really did rebuke Peter, then Peter is a very poor choice to be the first pope—something that all Catholics are supposed to believe. There are a number of reasons why this is so.

First of all, Peter was never in Rome. The Bible never says that Peter was in Rome. Peter was the apostle to the Jews; Paul was the apostle to the Gentiles. Rome was the capital of the greatest empire of the ancient world. What would Peter be doing there? The Jews were expelled from Rome (Acts 18:2). When Paul wrote to the church at Rome, he sent greetings to over twenty-five people, but never mentions Peter (Rom 16:3-15). When Paul was in Rome he not only never mentioned Peter, but said: “Only Luke is with me” (2 Tim 4:11). Both the church father Irenaeus and
the church historian Eusebius make Linus the first bishop of Rome (2 Tim 4:21). Peter claimed to be at Babylon, not Rome (1 Pet 5:13).

Secondly, Peter was not above the other disciples. After the incident at Caesarea Philippi, which supposedly elevated Peter above the other disciples (Matt 16:13-19), they obviously did not recognize his authority over them, for they still argued among themselves who was the greatest (Luke 22:24). The same authority given Peter was given to all the disciples (Matt 18:18). Peter was subordinate to the church at Jerusalem (Acts 8:14). Peter was only one of three pillars in the early church (Gal 2:9). Christ’s favorite disciple was John, not Peter (John 21:20). The head of the church at Jerusalem was James, not Peter (Acts 15:13; Gal 2:12). Peter worked with the other disciples (Acts 3:1, 4, 4:13, 5:29). Paul mentions Titus thirteen times (2 Corinthians, Galatians, 2 Timothy, Titus); he mentions Peter only ten times. But is not Peter mentioned in the NT more than any other disciple? Yes, but the Bible also records more of his errors than those of any other disciple.

Thirdly, Peter did not act like the pope. Unlike a modern pope, Peter was married (Mark 1:30; 1 Cor 9:5), something no pope is supposed to be. Peter had no riches (Acts 3:6); the pope is surrounded by riches. Peter had apostolic signs (Acts 3:6-7); the pope doesn’t even profess to have any. Peter suffered persecution for Christ (Acts 5:40-41); the pope has the respect of the world. Peter was a preacher and a teacher (Acts 5:42); the pope is a politician and a celebrity. Peter did not accept worship (Acts 10:26); the pope lets people bow down to him. Peter preached he true gospel (Acts 15:11); the pope preaches a false gospel. Peter was an elder, a servant, and an apostle (1 Pet 5:1; 2 Pet 1:1); the pope claims to be the “Holy Father” and the “Vicar of Christ.”

Simon, Peter, or Cephas? Take your pick. The first pope? Never. And yet, over the past twenty years, some notable Evangelicals have joined the Catholic church, thereby acknowledging that they think the papacy is Scriptural.

Laurence M. Vance is the author of The Other Side of Calvinism and many other books.