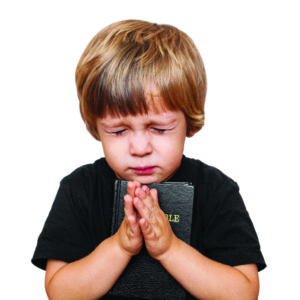 In his first letter to Timothy, Paul wrote these words about prayer:

“Therefore I exhort first of all that supplications, prayers, intercessions, and giving of thanks be made for all men…For this is good and acceptable in the sight of God our Savior, who desires all men to be saved and to come to the knowledge of the truth” (1 Tim 2:1, 3-4, italics added).

One of the great truths of Christian revelation is the truth of God’s universal love for all mankind. The Cross of Christ is obviously the greatest expression of that love. In fact, in the verses immediately following the ones just quoted, Paul goes on to say that as the only Mediator between God and man, the Lord Jesus Christ, “gave Himself a ransom for all” (1 Tim 2:6).

Thus Paul reminds Timothy, his fellow worker (and through Timothy, the church at Ephesus—see 1:3), that all men are an appropriate subject for Christian prayer precisely because God desires all men to be saved. Moreover, this desire finds a decisive manifestation through Christ’s mediatorial role, since His death was a universal ransom.

Naturally, it is not Paul alone who affirms such truths. The Apostle John is emphatic that through His death Christ has become not only the propitiation (“satisfaction”) for the sins of Christians, but also for the sins of the whole world (1 John 2:2). The Apostle Peter is equally emphatic that God does not want anyone to perish [die prematurely under the Tribulation judgments]2, but desires that all men should return to harmony with Him through repentance (2 Pet 3:9).3 Thus the witness of the NT is consistent in its affirmation that “God so loved the world that He gave His only begotten Son, that whoever [in the whole world!] believes in Him should not perish but have everlasting life” (John 3:16).

It follows, in the light of Paul’s words to Timothy, that we are to take these marvelous facts into account in our prayer lives. Indeed, if Christians do not find a way to pray for all men, then they are not obeying the command of 1 Tim 2:1-2.

Are we to pray for the salvation of every individual in the world? No, because no one who believes the Bible could pray such a prayer with Scriptural integrity. The Bible clearly discloses that many will be lost despite God’s desire that all should be saved.

It is not my purpose here to try to enter into the mysteries of God’s decrees. It will be sufficient to say, with many theologians, that for His own wise purposes God has not always decreed what His heart desires.

But we must be careful not to lose contact with God’s heart. God’s heart is so full of love for every individual on earth that He was willing to allow His only-begotten Son to suffer and die for that individual. Knowing this truth can affect our prayer life.

To begin with, we can pray for all men by praying for God’s worldwide work of evangelism. We can pray that God’s servants who truly preach the gospel of His grace may find an abundant harvest for the seed they sow. We can pray that in our own day when the world’s population is increasing exponentially, that the number of the saved might likewise increase. Thus, through prayer, we can become partners in the spread of the marvelous message that eternal life is absolutely free.

But also we can pray for particular individuals about whose salvation we are concerned. And we can know, as we do so, that God is concerned, too, and that He has already given His Son to die for them. As we appeal to these truths in prayer, they can strengthen our faith on behalf of the individual for whom we are praying. And, as the Scriptures make plain, when we pray believingly God delights to work.

That does not violate God’s mysterious eternal decree. It simply shows that our believing prayer has a role to play in the outworking of His sovereign purposes in the world of men. Let us be careful not to miss such a role.

Shall we pray…for the lost? You bet!

This article originally appeared in the April 1990 issue of Grace in Focus.

1. The material in brackets was added for clarification. It should be noted that what was put in parenthesis was probably not Hodges’s understanding of perishing in 2 Pet 3:9 in 1990 when he wrote this article. However, by 2001, it was his view, as is shown in his later book Harmony with God. See next note.