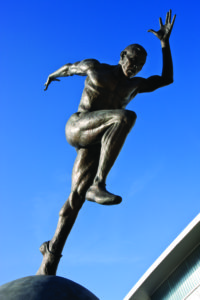 What is the secret to a prosperous life? In their controversial bestseller, The Triple Package: How Three Unlikely Traits Explain the Rise and Fall of Cultural Groups in America, Amy Chua and Jeb Rubenfeld offered to explain why some cultural groups do better than others. They put it down to possessing three traits: a superiority complex, a sense of insecurity, and strong impulse control. They argue that cultural groups who have each of these three traits—such as Jews, Mormons, and recent immigrants from Nigeria, Iran, and China—tend to be more successful than other groups in America.

The third trait is especially interesting. Chua and Rubenfeld define impulse control as the ability to resist temptation. What they have in mind is resisting the temptation to quit in the face of a daunting challenge, and resisting the urge to spend and consume now, in order to achieve goals later on (pp 117-118). Groups that favor self-control in the present, tend to be more successful in the future.

Of course, the implication of Chua and Rubenfeld’s thesis is that there are cultural groups who lack impulse control and that they will be less well-off than those who have it.

In 1 Cor 9:24-25, Paul pointed to the importance of self-control for obtaining rewards:

“Do you not know that those who run in a race all run, but only one receives the prize? Run in such a way that you may win. Everyone who competes in the games exercises self-control in all things. They then do it to receive a perishable wreath, but we an imperishable. (1 Cor 9:24-25, emphasis added, NASB).

Paul is admonishing the Corinthians to exercise selfcontrol. He urges them to live in such a way as to obtain an imperishable crown in the millennial kingdom. The question is, what kind of self-control does Paul have in mind?

The word for self-control here is enkrateia. The Exegetical Dictionary of the New Testament (EDNT) explains how the Greeks considered it a virtue:

“Enkrateia is normally used with regard to all human desires, includes desires for food and drink, sex, and conversation. Thus [enkratēs] signifies the free, autonomous, and independent person, who does not allow himself to be tempted or diverted by any allurements” (EDNT, 377).

Paul listed self-control as a fruit of the Spirit (Gal 5:23). He also referred to it in 1 Cor 7:5, 9, where he counseled married people not to deprive themselves of the conjugal bed for too long lest they lose their selfcontrol and get tempted by Satan; likewise, Paul suggested that single people should marry “if they cannot exercise self-control…For it is better to marry than to burn with passion” (emphasis added).

In both of those cases Paul had self-control over sexual passions in mind. But in 9:25, Paul advised self-control “in all things.” What does that include?

An answer is suggested by Paul’s comparison of Christian self-control with that of an athlete (esp. a runner and a boxer). This would have been a very familiar image to the Corinthians. They lived in proximity to the Isthmian games, a contemporary to the more famous Olympic games. The Corinthians would have understood, as we do, that athletes have to maintain a strict regimen if they hope to beat out their competitors. What athletes eat, how much they sleep, how much time they spend exercising, socializing, and doing other activities, are all strictly controlled in light of the ultimate goal of winning the games.

Christians should have the same discipline.

Of course, there isn’t an exact correspondence between athletics and the Christian life. Most importantly, while only one athlete can win the games, all Christians can win eternal rewards and no Christian wins a crown at the expense of anyone else. The only competitor we have is our own selfish desires, which is why Paul emphasizes self-control over our own bodies. Boxers fight their opponents, but Paul said he beat his own body (1 Cor 9:26-27).

But what kind of things must we exercise self-control over?

While Paul talked about forgoing eating, drinking, and having a wife, in order to win people to the gospel, Jesus spoke about similar potential hindrances to fruitfulness in the Parable of the Four Soils. There the Lord compared the different outcomes of the Christian life to how seeds flourish in diverse kinds of soil.

According to the parable, the second soil represents someone who believed for a while only to fall away in time of temptation (Luke 8:13), while the third soil is someone who believes, but brings no fruit to maturity because they are “choked with cares, riches, and the pleasures of life” (Luke 8:14). This is a picture of believers whose fruitfulness has been hindered. Cares, riches, and the pleasures of life are precisely the kinds of things we need to have self-control over if we want to obtain eternal rewards.

Cares are the worries and concerns that attend daily life (e.g., what we will eat, drink, wear, and where we will live). These are all legitimate concerns, especially if you have a family to take care of. And yet, even legitimate concerns can become so overblown that they dominate our lives, and take our eyes off the prize of eternal rewards.

Riches refers to money and possessions. There are many passages in Scripture that advise how we should save our money for future times of need. Good men leave inheritances for their grandchildren (Prov 13:22). People who fail to provide for their families deny the faith (1 Tim 5:8). But while there is such as thing as Biblically prudent use of money, there is also love of money which Paul called “the root of all evil” (1 Tim 6:10). If money is something you prioritize above God, then you’re unlikely to serve Him fruitfully. You cannot serve both God and mammon.

The pleasures of life probably refers to lawful pleasures. It would be too obvious to say that we need to exercise self-control over sins. What is not always obvious is that even lawful pleasures can be taken to an extreme and become spiritually damaging. All things are lawful, but not all things are beneficial (1 Cor 6:12), or lead to winning eternal rewards. For example, leisure time is not a bad thing. In fact, it was ordained by God who gave the Israelites one day a week to rest. But watching TV, reading the latest thriller, and taking a vacation are unlikely to win you any rewards. If we spend too much time on leisure, we risk wasting time that could have born fruit into eternity.

The biggest temptation involved with cares, riches, and the pleasures of life is that none of these things are obviously sinful. But undo attention and involvement in them will hinder our service for Christ. Hence, these are examples of things over which we should exercise self-control.

Use Your Liberties in Light of Eternity

In 1989, Stephen R. Covey published the bestselling book, The Seven Habits of Highly Effective People. The second habit he proposed was: “Begin with the End in Mind.”

That’s what Paul did. Like an athlete training for the games, Paul had an end goal in mind, and he lived his life to attain it. So Paul chose to forgo having a wife and refused to ask for financial support from the Corinthians for the sake of preaching the gospel (1 Cor 9:15-23). Instead of being free from all men, Paul chose to be the servant of all (1 Cor 9:19). Instead of eating and drinking, he disciplined his body (1 Cor 9:4, 27). Why? So he could win people for Christ and obtain an imperishable crown in the life to come (1 Cor 9:19-21, 25). And Paul urged the Corinthians to do the same, to follow his example and exercise self-control over their lives, making choices in light of eternity.

If Chua and Rubenfeld are right, different cultural groups can have different material outcomes based on virtues like impulse control. If Paul is right, different Christians will have different eternal outcomes based on virtues like self-control. Christians who don’t exercise self-control, and who use their freedom to enjoy temporary pleasures, won’t attain an imperishable crown and other rewards. Christians who do follow Paul’s example and exercise temperance will be rewarded. That was Paul’s expectation. Near the end of his life, Paul wrote this:

I have fought the good fight, I have finished the race, I have kept the faith. Finally, there is laid up for me the crown of righteousness, which the Lord, the righteous Judge, will give to me on that Day, and not to me only but also to all who have loved His appearing (2 Tim 4:7-8).

Paul knew he had lived a life worthy of reward. Given what’s at stake, given what you can win and what you can lose, do you?