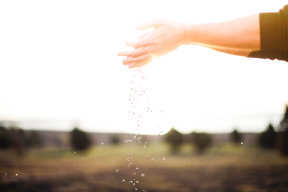 A Time of Persecution

This passage is pertinent at a time when Christians may anticipate approaching stress or persecution from an ultimate “super-church,” for it is misguided religion which most usually is hostile to the faith (cf. John 16:2). Such is represented here by Saul.

8:1. Saul is seen as sympathizing with the murder of Stephen. Thus, as a religious zealot, he was nonetheless as far from God as possible, for God did not sympathize with Stephen’s death. Just the opposite. God’s thoughts and Saul’s are at opposite ends of the spectrum. So also are the thoughts of many modern religionists, however sincere. Out of this springs persecution (John 16:2).

Nevertheless, even though Saul’s thoughts are opposed to God’s thoughts, he and his fellow persecutors become instruments of the divine purpose. They are used to scatter believers and hence to widen the testimony of Christ (v 4; cf. 1:8).

They were all scattered. The word scattered (diesparēsan, vv 1, 4) is related etymologically to speirō used of sowing seed. Indeed, the ancient method of seed-sowing, flinging a handful of seed taken from a seed-sack, was in effect scattering. Thus the parable of Matt 13:24ff finds illustration. For in Acts 8:1 the Son of Man, reaching into the full seedsack of Jerusalem, is flinging His seed forth into “His field” that these “children of the kingdom” might there become fruitful. Philip at Samaria illustrates the abundant fruitfulness of a single seed.

Thus the man who was making havoc of the church (v 3) was in fact being used by the Lord Jesus to further it. For all the efforts of men serve to advance the plan of God. For the only power in heaven or on earth is in the hands of the Church’s Head (Matt 28:18). Saul thus illustrates the irresistible reality of Stephen’s testimony. Christ was indeed at the right hand of God (7:56).

8:2-4. And pious men carried Stephen to his burial. This is an act of courage often overlooked. It was risky to even identify with Stephen (as subsequent persecution proved), much less to publicly mourn his death with great lamentation. It would have been easy to rationalize why they should do nothing for the martyr. For example, the authorities would have buried him, for Jewish custom called for a criminal’s burial, though no mourning (cf. F. F. Bruce, Acts, in loc.). But to these men Stephen was no criminal. That is why they mourned over him. Note that true mourning is Christian and Biblical, and it is false pseudo-piety to set it aside.

Yet they act courageously. And the secret of that courage is found in the description pious (eulabēis). The word pious is only used in Acts of Christians. Times of persecution reveal true piety. The nominal Christian may shrink with fear, but the “devout” believer steps out in faith, as did these men. Persecution, or danger, did not make them devout, but since they were already devout, they were prepared to face it. We see them as “devout” by their act recorded here.

The word group to which eulabēis belongs has its basic idea in the concept of “fearing.” Thus “fearing” men carried Stephen to his burial, but they were clearly fearing God, not man. The fear of God is the root of true devotion (cf. Prov 29:25; Luke 12:4-5; Heb 13:5-6). Out of true fear of the Lord emerges trust and hence a fearlessness of man. Now is the time to cultivate the devout life, the God-fearing life, so that in times of testing we may, like these, be strong.

The verb buried (sugkomizo„) may be used of bringing in a harvest. Tragic though Stephen’s death was, it was also as the gathering of a sheaf into God’s barn (cf. Matt 13:30 and 43).

8:5. This passage marks the first step in the gospel’s effort to break down “race” barriers and unite men of diverse nations into a single body in which there would be neither Jew nor Gentile.

Then Philip went down. Though this was geographically the standard way of referring to a movement from Jerusalem, it is noticeable that both of the great geographical movements of Philip’s career recorded in this chapter are “down” (cf. v 26).

Spiritually, Philip was a humble man ever willing to go “down.” There is condescension in his accepting the ministration to the widows in Acts 6, and in his willingness to go to the desert to witness to a single soul (vv 26ff) after successful “city evangelism” (v 6). There is obviously, for a Jew, condescension in preaching to Samaritans.

Morally and spiritually he went down to their city. Yet the great message of Christianity is of One Who came down to meet man’s need (Philippians 2). Philip was, in faint measure, like his Lord.

When he was chosen in Acts 6 as a deacon, he was obviously regarded as “full of the Holy Ghost and wisdom” (Acts 6:3). Just as Stephen was full in Acts 7, so Philip was full in Acts 8. Doubtless Philip’s wisdom here derived from a knowledge (which under Apostolic teaching he must surely have gained) of our Lord’s words in Acts 1:8. Though he might well have wondered whether it was right or wise to take this crucial step of preaching to Samaritans, that he was Spirit-led and wise the following verses make clear.

8:6-8. If he doubted whether they would listen, he found that they with one accord gave heed. If he doubted God would work among Samaritans, as He had in Jerusalem, he found God liberated the possessed and healed the lame. If he feared resentment and bitterness against him as a Jew (cf., e.g., Luke 9:53), he found a city of great joy instead. Thus was the wisdom of winning souls again displayed. “He that wins souls is wise” (Prov 11:30).

Note that the gospel and its effects reached their spirits (i.e., mind) for they gave heed (v 6), and it reached their bodies (v 7), and it reached their souls (v 8). The gospel is not designed for a Jew as a Jew, but for man—spirit, body, and soul. It was profitable for Samaritans as it is for all men. Its mansuitedness has received worldwide demonstration, in all kinds of cultures and in all ages since that time. It comes from the Creator!