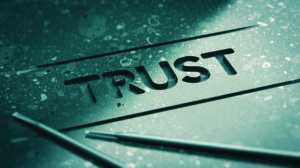 By Bill Fiess with Bob Wilkin

Why do people dislike the word believe? And when they prefer trust, why do they speak of heartfelt trust in the living person of Christ?

In our postmodern world faith in propositions is considered impersonal, even if you are believing propositions about a person. Faith as a personal encounter, however, is considered quite acceptable. For example, Grudem says, “The more you talk about the need for trust in the person of Christ the more you have to talk about a personal encounter with Christ, about coming into his very presence, and that means realizing deeply that he is your God” (p. 106, emphases his).

Notice the subtle shifts which take place. First, believing is said to refer to trust, even though not a single English translation ever translates pisteuō as trust. Second, trust is then boosted up to heartfelt trust. Third, heartfelt trust is then not in the promise of everlasting life but in the living person of the Lord Jesus Christ. Fourth, heartfelt trust in the living Christ is then identified as a personal encounter with Him. Fifth, a personal encounter with the living Christ then becomes coming into Christ’s very presence and realizing deeply that He is your God.

Starting with believing in Jesus—many pastors and theologians today end up with a commitment to the Lordship of Christ as the real meaning of believing in Him. Grudem says,

The more we emphasize coming into the presence of Christ and trusting him, the more the idea of optional submission to his lordship becomes unthinkable. When we truly realize what it is to come into the majestic presence of the risen Christ, any thought of saying, ‘Jesus, I’ll trust you as my Savior today, and later I might decide to turn from sin and follow you,’ is as far from our mind as the uttermost part of the sea (p. 106).

To believe in Jesus for everlasting life (1 Tim 1:16) is to be convinced or persuaded that He gives everlasting life to all who simply believe in Him (cf. John 11:25-27 and note Martha’s response). It is not trust, heartfelt trust, a personal encounter, submission to His Lordship, or deciding to turn from sins and to follow Christ, etc. It is believing in Him.

Notice these passages which refer to not believing:

“If I have told you earthly things and you do not believe, how will you believe if I tell you heavenly things?” (John 3:12).

But although He had done so many signs before them, they did not believe in Him (John 12:37).

Imagine changing the word believe to trust in these quotes. Would that mean the same thing? No. “If you do not believe Moses’ writings” is not the same as “If you do not trust Moses’ writings.” In fact, it is hard to know what that would even mean. The same is true of all of these examples and even also uses of pisteuō in the NT.

And what about Jesus’ question to Martha in John 11:26b, “Do you believe this?” He had just said that He will raise from the dead into glorified bodies all who believe in Him (v 25) and that whoever lives and believes in Him will never die spiritually (v 26a). If He then asked, “Do you trust this?” what would that mean? He is asking if she is convinced that what He said is true. Then she answers, “Yes, Lord, I believe that You are the Christ, the Son of God…” Trust would not be a good translation there either.

Saving faith is not heartfelt trust. It is believing in the Lord Jesus Christ for what He promises the believer—everlasting life that can never be lost (John 3:16; 6:35; 11:26).