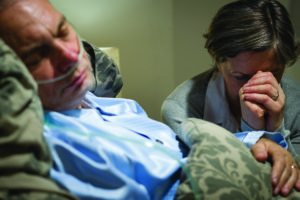 As most students of the Bible know, James 2:14-26 is a very controversial passage. Much of the difficulty revolves around the meaning of the word save in Jas 2:14 and the way many people equate salvation with salvation from hell. I believe that is a serious misinterpretation that compromises the free gift of eternal life, and I will try to prove to you that James had another kind of salvation in mind.

The Definition of Sōzō

The Greek verb sōzō and the noun sōtēria most often translate into English as save and salvation. What do these words mean?

According to BDAG sōzō means “1) to preserve or rescue from natural danger or afflictions, save, keep from harm, preserve, rescue” and “2) to save or preserve from transcendant danger or destruction, save/preserve from eternal death” (p. 982, italics original). The first meaning is deliverance from problems in this life. The second meaning is deliverance from the problem of eternal condemnation.

In other words, sōzō is not a technical term which always means salvation from hell, even though that is how it is often read. On the contrary, sōzō has the same range of meanings in Greek as salvation does in English. It can refer to either temporal or eternal deliverance. So which way is the word used in James?

How Sōzō Is Used in James

The first occurrence is in Jas 1:21-22. Here James admonishes believers to both receive the implanted word of God and be doers of the word which is able to save one’s life. It seems unlikely that he has eternal life in view, because James already assured his readers that they were regenerated “by the word of truth” (v 18). They didn’t need to be eternally saved. But they did need to grow and mature in the faith. James was concerned that filthiness and wickedness would lead these believers to an early death, so he urged them to lay aside their sins and meekly receive the Word which was already implanted in them (cf. 1 Pet 1:23-25). That seed has enormous potential. It could save their life, if they heard it and obeyed. If they disobeyed, and pursued wickedness instead of laying it aside, their sins could end in death (v 14-15). In sum, it seems that James had temporal death and salvation in view.1

Another use of the word appears in Jas 4:12, “There is one Lawgiver, who is able to save and to destroy. Who are you to judge another?” In v 11, James warned his readers not to speak evil of fellow Christians. They shouldn’t judge others. James is making the same point that Jesus did in Matt 7:1, Luke 6:41, and elsewhere. Speaking evil of others is the opposite of the humility all Christians should exhibit (Jas 4:10). God is our Judge, and we should leave judgment to Him. It is up to Him to decide whether to save people from the deadly consequences of their sins, or to let them suffer (James 1:15; 5:20). To force the word save in this verse to mean deliver from eternal condemnation is unwarranted. James is once again thinking of the deadly consequences of sin in this life.

The next use of save is found in James 5:15, which reads, “And the prayer of faith will save the sick, and the Lord will raise him up. And if he has committed sins, he will be forgiven.” It’s hard to miss the temporal nature of this reference. The context involves someone suffering from a serious, potentially fatal, illness. What are we to do when that happens? James indicates that the prayer of faith will deliver the sick person from illness and premature physical death. The NASB (“the prayer offered in faith will restore the one who is sick”) and NIV (“the prayer offered in faith will make the sick person well”) translations reflect this understanding. This is temporal salvation.

In his final use of sōzō, James says in 5:19-20: “Brethren, if anyone among you wanders from the truth, and someone turns him back, let him know that he who turns a sinner from the error of his way will save a soul [or life] from death and cover a multitude of sins.” This warning could have been taken straight from Proverbs. I’m sure you remember the verse that says, “There is a way that seems right to a man, but its end is the way of death” (Prov 14:12). Solomon was addressing faithful Jews, warning them about the consequences of sinning. So is James. Believing in Jesus for eternal life (“Brethren, if anyone among you wanders…”) does not make you immune from straying. Even mature believers can “wander from the truth.” Convince the wanderer to change his ways and to return to the truth and you’ll be saving his life.

Since four out of the five uses of save in James do not refer to salvation from hell, but rather refer to deliverance from death or some other temporal judgment, it seems likely that James’s use of the same word in 2:14 would follow suit. Does it?

What does it profit, my brethren, if someone says he has faith but does not have works? Can faith save him?

Since the meaning of a word is derived from its usage in the immediate context, we must ask the question, “Save from what?” If the answer to that question is eternal condemnation, as is commonly held, then we could represent that interpretation with the following syllogism:

P1: Faith without works cannot save.

P2: To save means to deliver from eternal condemnation.

If James has eternal condemnation in mind, then it is impossible to escape the conclusion that, contrary to what the Lord Jesus and the Apostle Paul taught, works are indeed a co-condition of salvation along with faith in Christ.

Is James Only Complaining About a Certain Kind of Faith?

Protestants eager to reconcile James and Paul sometimes propose the following solution: In order to escape the conclusion that eternal salvation depends upon works, many English translations insert the words such or that immediately before faith. Here are a few examples, with emphasis added:

ESV: What good is it, my brothers, if someone says he has faith but does not have works? Can that faith save him?

NIV: What good is it, my brothers and sisters, if someone claims to have faith but has no deeds? Can such faith save them?

NASB: What use is it, my brethren, if someone says he has faith but he has no works? Can that faith save him?

NET: What good is it, my brothers and sisters, if someone claims to have faith but does not have works? Can this kind of faith save him?

Some interpreters justify the insertion of these qualifiers by appealing to the presence of the Greek definite article with the word faith in 2:14. However, the definite article can also be found with faith in vv 17, 18, 20, 22, and 26, but qualifiers such or that are never proposed as natural translations of those verses. Why not? The translators have inserted their theological biases.

Why does adding these qualifiers matter? Adding the qualifiers this kind of, that, or such to faith in 2:14 implies that there are different kinds of faith, some that result in eternal life and others which are spurious and result in eternal condemnation. John MacArthur expresses that understanding of faith in Jas 2:14-16:

Not all faith is redemptive. James 2:1416 says faith without works is dead and cannot save. James describes spurious faith as pure hypocrisy (v. 16), mere cognitive assent (v. 19), devoid of any verifying works (vv. 17-18)—no different from the demons’ belief (v. 19). Obviously there is more to saving faith than merely conceding a set of facts. Faith without works is useless (v. 20) (The Gospel According to Jesus, p. 186).

Preachers, teachers, and theologians often define true saving faith to include all kinds of works, such as the commitment of one’s life, submission of one’s whole life to the Lordship of Christ, turning from sins, and a life subsequent to faith filled with good works and the fruit of the Spirit that “prove” that a person has been justified by grace. Sadly, this view totally undermines the Biblical teaching of assurance of eternal life as found in John 5:24 and 1 John 5:9-13.

If “true saving faith” includes the elements of commitment, surrender, and turning from sins, then it is impossible to know if I have committed, surrendered, or turned from sins enough to prove I am a true believer. Of course, the Bible often admonishes us to do these things, but only after we have believed in Christ for eternal life and received it (e.g., Rom 12:1-2). Hence, thinking that James is speaking about a spurious kind of faith seriously confuses the nature of faith and creates an epidemic of uncertainty and a lack of assurance about one’s eternal destiny. One can never be certain that he has saving faith.

These problems dissolve once we see that James is not talking about eternal salvation, but temporal salvation. There is only one kind of faith, but not every faith has the same object, and not every faith is equally fruitful, complete, or mature.

Some believers welcome the Word of God implanted within them with the result that their lives are preserved (Jas 1:21).

Believers who fail to apply what they believe will experience temporal judgment and will be on the path to an early grave (Jas 2:14-17).

God is the one who is able to preserve or destroy believers (Jas 4:12). Some believers are facing serious illnesses and are in need of healing from God (Jas 1:15).

To conclude, when James states that faith without works cannot save, he is not referring to being saved from eternal condemnation. Rather, he is referring to deliverance from temporal judgment. In a world where people are constantly asking what difference Christianity makes in one’s life here and now, James would answer, it could very well mean the difference between life and death.

Keith Pesce is a graduate of Florida Bible College and is currently completing a Master’s degree in Christian Apologetics at Southern Evangelical Seminary. He and his wife, Cindy, live in Port St. Lucie, FL and attend and serve as teachers at Coastal Life Church and in their home Bible study.

1. See the article on Jas 1:21 by Bob Wilkin in this issue for more details.

2. For a discussion of justification by works in Jas 2:14-26, see the article by Shawn Lazar in this issue.