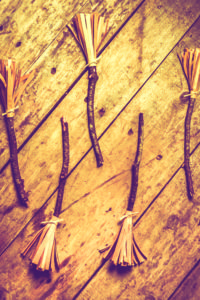 8:9-11. But there was a certain man called Simon, who previously practiced sorcery in the city. Samaria and Jerusalem are to be contrasted in that, despite her rebellion and unbelief, Jerusalem was not afflicted with superstitious adherence to sorcery (cf. John 4:22). In ignorant religion, superstition and magic tend to prevail. But where the truth is known, even if it is not obeyed, it tends to drive these things back into the shadows.

Hence, these verses show the density of the spiritual darkness in Samaria. The delusion knew no bounds of class or status (from the least to the greatest), and it had proved itself tenacious and enduring (for a long time).

8:12-13. Here is seen most strikingly the liberating power of the gospel. The kingdom of God and the name of Jesus Christ are mightier than the kingdom of darkness or any earthly name (like Simon’s).

When they believed Philip as he preached the things concerning the kingdom of God and the name of Jesus Christ, both men and women were baptized. Baptism was a decisive step for these Samaritans in renouncing their former superstitions and linking themselves with this name (cf. v 16).

Moreover, not only were the deceived liberated (v 12), but so was the deceiver himself (Simon himself believed). His experience with the truth was no different from the others, for he too, believed and was baptized. For there are no special conditions for even the worst of sinners, Satanic tools and blasphemers though—like Simon—they may be.

8:14-17. These verses complete the picture, bringing into sharpest contrast the present state of the Samaritans with their former one. Whereas in Simon they imagined they found “the great power of God,” now, in the Holy Spirit, they really did find it (cf. 1:3)! And whereas they had given heed to Simon’s deceits, now they possessed One to whom by giving heed they could be taught in the things of the truth (cf. 1 John 2:27). The Christian finds true deliverance from both Satanic power and delusion, by the indwelling Spirit (cf. 1 John 4:4).

The unusual method by which the Samaritans received the Spirit (through the laying on of the apostles’ hands) prevented schism and rivalry at the very first. Samaritan religion rejected the claims of Jerusalem, but by receiving the Holy Spirit through the hands of the Jewish apostles, the Samaritan converts are now made to sense their indebtedness to it. Jews despised Samaritans, yet here they both lay hands on and pray for them.

Had the Spirit been given in Samaria exactly as it had in Jerusalem, this fact might have been distorted to prove the Samaritan error of down-grading the place God had put His name. The wisdom of God prevents all this.

Typologically, we might suggest that Simon prefigures the man of sin who likewise will claim to be “someone great” (v 9; 2 Thess 2:4), supports his claims by miracles (2 Thess 2:9; Revelation 13), and will be an object of wonder and admiration to the world (v 10; Revelation 13). As the ignorant worship of Samaria (John 4:22) begat a Simon, so the ignorant perversion of Christian truth by the world will ultimately produce the man of sin.

8:18-19. Simon was truly saved. Verse 13 does not give Simon’s words, but the words of Luke under the Holy Spirit’s guidance, “Simon himself also believed.” This report is in no way distinguishable from that of those new believers in v 12. But as so many do, Simon brings into the Christian life the erroneous outlook of his past.

He offered them money. Doubtless, in the past, money could have secured the exercise of Simon’s powers, so he naturally thought it could also secure God’s powers.

8:20-23. “Your money perish with you.” The sharpness of Peter’s rebuke at this offer was designed to bring Simon to repentance, and it did (v 24). These words may be applied to any Christian whose heart places an undue emphasis on the value of money.

Perish (eis apoleian) occurs only once more in Acts (25:16) where it clearly does not refer to hell, but to ruin. Here it merely warns of the ruin of life and soul which such an attitude could bring (cf. Luke 6:49). Peter actually wishes the destruction on the money (thus highlighting his attitude toward it). This was a warning to Simon as to what he was heading for.

“Your heart is not right in the sight of God.” The elevation of money in the heart makes it crooked before God (cf. eutheia) and shuts the soul out from “part and lot” in eternal things which count.

The verse should read: “For I see you being for [destined to] the gall of bitterness and the bond of iniquity.” The heart enamored of the influence of money will ultimately taste the galling sorrows and disappointments which it can bring (cf. 1 Tim 6:9-10).

The LXX also renders cholē as poison (Acts 8:23).1 Love of money is poison for the soul. The heart enamored of money’s influence also is easily caught in a bond of sin, entangled and enslaved by the wickedness which accompanies money-seeking.

8:24. “Pray to the Lord for me.” Simon’s quick repentance was a sign of a tender conscience. Though “simony” has become a name for a corrupt practice, and Simon has been since earliest times regarded as unregenerate and evil, yet men have thus testified to their blindness to divine grace. It is even possible that, contrary to tradition, the remainder of Simon’s life was fruitful, for if Peter prayed for him, it is likely God answered that prayer.

Three references are found in this context to prayer (vv 15, 22, 24). Simon had missed the fact that prayer lay behind the giving of the Spirit and saw only the external laying on of hands (vv 18, 19). Yet his greatest need was prayer (vv 22, 24). The heart enamored of money is blinded to prayer, while the heart controlled by prayer is blinded to money.

Men usually feel that money can obtain most of what they want or need (as Simon did here, v 20). The man of God realizes that prayer alone can obtain what is really needed and worthwhile. Simon is brought to realize the triviality of money in the things of God, and the transcendent importance to the soul of prayer.

He begins by seeking to buy; he ends by asking for prayer.

1. The NKJV translates it as “gall,” a word that can refer to something which is bitter or severe.