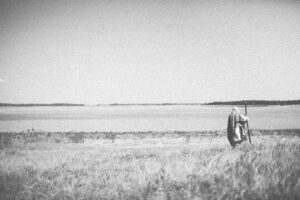 BY ACCEPTING OTHERS AS CHRIST ACCEPTED US (15:1-7)

15:1. Paul contrasts we [including himself] who are strong with the weak. Strong believers are enjoined not to please themselves. While there is nothing wrong with believers enjoying the things that God has given us to enjoy (cf. 1 Tim 6:17), we must not stubbornly do so while knowingly injuring other believers in our church. The Lord Jesus does not want us using our freedom to hurt fellow believers.

The way we use our freedom properly is by freely giving up rights we have in order not to injure weaker brothers.

15:2. Rather than pleasing oneself, each of us is to please his neighbor in what is good. Note that Paul does not say let each of us please the Lord.

The good here probably refers to what is good for the whole body. Selfless action results in the edification of the church body.

It is instructive that what Paul has in mind are situations where the weaker brother is directly present. We are not enjoined to live in fear that our private actions will hurt the weaker brother. We should simply make sure that we do not flaunt our liberty.

15:3. The Lord Jesus Christ is Paul’s prime example of one who did not please Himself. He lived, died, and rose again to please God the Father.

On the cross He bore “the insults” [or reproaches] of men who were, in reality, angry with God the Father.

15:4. The OT Scriptures are in view in the expression whatever was written beforehand to give us teaching. Of course, this applies to the NT as well (2 Tim 3:16-17; 2 Pet 3:14-16). The hope (or, expectation) of which Paul speaks is the certain expectation of the Second Coming of Christ and of the establishment of His kingdom. That hope can and should engender in the believer, who is focused on it, endurance and encouragement derived from the Scriptures. Of course, the Judgment Seat of Christ is not far from Paul’s mind in what he is saying here (cf. Rom 14:10-12).

15:5-6. Paul launches into a prayer. He desires that the God of endurance and encouragement (cf. v 4) would grant the believers in Rome a common mindset (the same aspirations for one another), one that was in harmony with Christ Jesus. That in turn would result in a corporate glorification of the God and Father of our Lord Jesus Christ. This occurs when believers are unified inwardly and outwardly.

15:7. This is the only place in the NT which specifically refers to Christ having accepted (or received) us. This probably refers to the fact that He has died for us and given us everlasting life.

15:8-9. Christ Jesus has become a minister to the circumcised in the sense that He taught and helped the house of Israel during His earthly ministry, and His apostles continued that ministry. He and His apostles shared the truth of God with Israel for two reasons: so that He might confirm the OT promises made to the fathers and so that the Gentiles might glorify God for His mercy.

The reference to the Gentiles (or nations) glorifying God for His mercy as a result of Jesus’ ministry is Paul’s recognition that Jesus’ ministry had a secondary purpose. It was to prepare the way for the birth and development of the Church, comprised of Jews and Gentiles together in one body.

The OT quotation is found in two separate texts, 2 Sam 22:50 and Ps 18:49. Paul and the other apostles confessed the Messiah among the Gentiles and sang praises to His name wherever they went.

15:10. This quotation is from Deut 32:43. The rejoicing the Gentiles should and will do “along with His people [Israel]” will be during the eternal reign of Jesus, starting with the Millennium (Revelation 20) and continuing forever on the new earth (Revelation 21–22).

Paul applies this verse to the present. If Gentiles will one day rejoice with Jews in the kingdom, believing Gentiles should also rejoice with believing Jews today within the Church.

15:12. Paul cites Isa 11:10 in order to remind his readers that Jesus is “a [or the] root from Jesse” and that He “will arise to rule the Gentiles.” The hope of the Gentiles spoken of here is the “expectation” of the establishment by Messiah of His righteous kingdom when He soon returns. The Gentile believers in Rome had that expectation.

15:13. The God of hope probably refers to God the Father. He is the object of our hope. We are to have great expectation for God’s promise that Jesus will return soon.

Paul’s prayer is that God would fill the readers with joy and peace as they believe this. The Holy Spirit can give us the same hope as we regularly hear about Jesus’ soon return and the Judgment Seat of Christ from the Word of God.

15:14. Paul is personally persuaded that the believers (my brothers) in Rome are full of goodness. What he has written in 12:1–15:13 in no way was meant to discourage the readers or to give the impression that he doubted their intentions or even their spiritual maturity. It is spiritual believers who are competent also to admonish others.

That they have been filled with all knowledge further suggests that Paul knows they are well grounded in the Word and in sound doctrine.

Paul does so because of the grace [or favor] that has been given to him by God, that he should be a priestly minister of Jesus Christ for the Gentiles.

In the OT the priests handled the sacrifices. Paul applies these things to himself as a priestly minister who handles the gospel of God. The good news is that those who faithfully serve God are delivered from His temporal wrath.

The offering of the readers was their very lives (Rom 12:1-2). Paul’s reminder is designed to ensure that their offering would be acceptable, sanctified (or set apart) by the Holy Spirit.

15:17. Paul’s ground for exaltation was not based on something inherently praiseworthy in him. It was based on things pertaining or related to God. Paul saw his ministry as God working through him.

It is an error for believers to speak as though all they have done for Christ is solely their own labor, with no help from the Lord. But it is also wrong to act super spiritual and to claim that we had nothing to do with it. If we were not to take any credit for our ministries, then Paul could not boast about his ministry (vv 18-19).

15:18-19. Paul would write daringly about the work of God, but he would not dare to speak about anything other than the things that Christ had worked through him. This includes both word and deed. They had been used by God to produce obedience by the Gentiles (see 1:5), but Paul dared not claim this as something he did independently of Christ.

The result of the signs and wonders Christ accomplished through Paul is that he completed the spread of the gospel of Christ. Paul means that he spread the message far and wide. His ministry extended from Jerusalem, the heart of Judaism, and all around as far as Illyricum.

Paul considered this important so that he might not build on another person’s foundation. Paul often evangelized where no man had gone before. His task, as Apostle to the Gentiles, was to move from place to place among the nations, evangelizing and planting churches.

While Paul did visit and minister to churches that he did not plant (Acts 13:1-2), his modus operandi was to evangelize where the locals had not yet heard about Christ.

15:22. Here Paul takes the time to give more details about his planned visit to Rome.

A major reason why Paul had been hindered many times from coming to Rome was because of his missionary efforts thus far. It is likely that he intends the reader to understand that since there already was a strong gospel presence in Rome, he first went to places where there was no such presence (cf. vv 23-24).

15:23-24. Because of his work in these regions, Paul now believes that the Lord will open the way for him to visit them when he journeys to Spain. He has fulfilled his calling of planting churches in Greece and Asia Minor.

Paul’s desire to minister in Rome has lasted for many years. He expresses here a desire for their material support (and to be assisted by you on my trip there). He expects to enjoy his time with them (i.e., to be filled up). Paul found great joy in teaching and having fellowship with other believers.

15:26. Paul is going to serve the believers in Jerusalem by bringing a financial gift from the churches in Macedonia and Achaia.

The Gentile believers in Macedonia and Achaia had been pleased to make a certain contribution to the poor among the Jewish believers in Jerusalem.

Physical concerns here refer to material possessions. When Gentile believers materially aided the Jewish believers in Jerusalem, they strengthened the unity in the Body of Christ.

15:28. After Paul goes to Jerusalem with the gift, he plans to head out for Rome and then to Spain. The fruit that Paul expects to have sealed to them, that is to the believers in Macedonia and Achaia, refers to the sealing of future eternal reward for those believers for what they will have done for the saints in Jerusalem. There is a clear allusion to the Judgment Seat of Christ here (cf. Phil 1:22; 4:17; see also Matt 6:19-21).

15:29. On his trip to Jerusalem, Paul would be bearing material blessings to the believers there. When he comes to Rome, he will come in the fullness of the blessing of the gospel of Christ.

The gospel is a rich spiritual blessing capable of providing fullness of blessings to believers. If believers take the gospel of Christ to heart and live each day in light of it, then they will be delivered from God’s temporal wrath; they will be fulfilling their purpose on earth of glorifying God; and they will be well prepared for the Lord’s soon return and the Judgment Seat of Christ.

15:30-32. When Paul urges the readers to contend along with me in your prayers, he is talking about mutual work. Prayer, according to Paul, is not a passive activity. It is work.

First, he asks for prayer so that he might be delivered from unbelieving Jews in Judea. Most likely in view is his health, his freedom from imprisonment, and his life itself.

Third, he also wishes them to strive in their prayers concerning his proposed trip to Rome. He asks them to pray that he may come to them with joy by the will of God. He knows that his visit depends on the will of God (cf. Jas 4:13). His life is in God’s hands. And he can only come with joy if his ministry in Jerusalem is effective.

Fourth, he asks for prayer that he might find rest with them. In other words, he wants them to pray that his visit to Rome results in mutual refreshment, encouragement, and edification (cf. Rom 1:11-12).

15:33. Paul ends with a prayer of his own, a prayer that the God of peace might be with them all. He wants the blessing of God to be upon the churches in Rome.