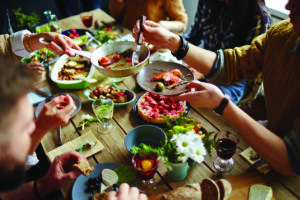 14:1. Paul was evidently aware that disputes on certain matters existed in the Roman congregations. His fundamental principle was mutual acceptance (15:7) and this acceptance must include the one who is weak in the faith. This signifies a person who does not fully grasp his personal freedom in Christ regarding mere earthly things.

The stronger brother was to accept the weaker brother, but not to engage in disputes about opinions. The word translated opinions refers to what we might call doubtful things. These are matters neither commanded nor forbidden in Scripture. Paul is not talking about basic morality. Paul here refers to conclusions drawn from a person’s own thought processes, rather than those drawn directly from God’s Word.

14:2-3. The problem of differing opinions about foods is the first question that Paul brings forward here. It is possible that the weak included ascetics from pagan backgrounds. Paul’s words are no doubt deliberately broad to include whatever food issues might exist in the Roman congregations.

Paul’s words imply that some of the believers at Rome were vegetarians by conviction. The people Paul has in mind ate vegetables, in contrast to those who felt free to eat everything.

Thus, to judge a fellow Christian was to usurp the prerogative of the divine Lord of the Christian household.

The statement because God has power to enable him to stand does not sound like a mere question of approval or disapproval. Rather it sounds like an exercise of divine strength. God will give strength to the strong believer not to fall into sin if he is relying on God’s strength.

14:5. The issue of observing certain days as special would have involved questions related to the feast days of the Jewish religious calendar, or even pagan traditions. The important question for Paul was not whether such scruples about special days were correct or not. The important thing was that everyone should be fully assured in his own mind. The observance of these rituals could easily breed a sense of division in a congregation. Paul will not forbid the observance itself, but he wants believers to undertake them only out of deep conviction.

14:6. If the conviction is deeply held, the observance of certain days, or the non-observance of certain days, will be a matter of conscience before the Lord. In the case of special days, Paul points out that whether the person…esteems the day or not, it is with the Lord in view. This no doubt means that the one who observes the day observes it with a desire to please the Lord, while the non-observer feels his relationship to God does not require this observance.

In the case of foods, the Christian who does not eat meat and the one who does give thanks to God for what each eats.

14:7-8. No Christian lives in isolation as if his experience concerned only himself. On the contrary, the Christian’s experience is inextricably related to the Lord to whom the Christian belongs. If all of this is taken seriously, it is manifest that whether we live or die, we are the Lord’s.

Paul is not speaking here of a choice we make (living or dying), but instead he is speaking of the inescapable reality that we are the Lord’s and that we cannot avoid our connection with Him in whatever we do or in whatever happens to us. This leads quite naturally to a discussion of the Judgment Seat of Christ.

14:9. Christ both died as well as rose and lived to be Lord of all, whether they are dead or living. At first glance, the phrase rose and lived is unexpected. However, in the Greco-Roman world a belief in immortality beyond the grave was unexceptional, but a belief in physical resurrection certainly was exceptional. Here the addition of the words and lived makes clear that a return to physical life is involved. The word rose cannot in that case be referred to some “spiritual” emergence from the experience of death.

14:11. Paul now gives Scriptural proof for his statement that all believers must give an accounting to God (Isa 45:23). This inspired pronouncement asserts that all humanity must someday bow the knee and confess to God.

It must be pointed out that the Isaiah prophecy is broad and general and leaves room for the differing situations we encounter in the NT. The unregenerate dead will be judged at the Great White Throne Judgment after the Millennium (Rev 20:5, 11-15). Believers will stand at the Judgment Seat of Christ when He returns to inaugurate His kingdom (i.e., before the Millennium).

Any serious consideration of this coming time of accounting of oneself to God should cause us to focus on our own coming judgment, rather than on the presumed failures of other Christians.

14:13. The Roman Christians should no longer judge one another. Instead, they should pass judgment on their own behavior. They should ask if their own conduct is harmful to their Christian rother. It should not create an impediment which might cause a brother to trip or fall. Neither should our conduct produce a snare in which another is caught. Seriousness in the light of our future accounting before God should lead to careful consideration of how our behavior affects others.

14:14. The statement that there is nothing unclean of itself refers to what may be called the mundane, or ordinary, things of human life. Violations of God’s moral law are not in view.

Thus, to a person who considers something to be unclean, it is actually unclean for that person. In other words, if such a person does not share Paul’s knowledge and conviction (see above), his freedom in the Lord Jesus is inhibited.

14:15. But where such inhibitions exist, the strong Christian must be fully sensitive to them. If because of your food your brother is grieved, then you are no longer walking in love, but are living selfishly.

The cost of such unloving conduct could be that he would ruin that person, who is in fact an individual for whom Christ died. This refers to temporal loss or destruction.

Ruin is the opposite of edification (cf. 14:19-20). If a believer is led to violate his own conscience, he has sinned against God. The stronger brother must take care not to bring this destruction about. 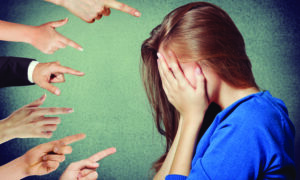 14:17. Paul’s point here is that the kingdom of God is not food and drink in the sense that our freedom to eat or drink is not what will be the defining characteristics of the coming kingdom. Rather, that which defines the kingdom to come is righteousness and peace and joy in the Holy Spirit. Whenever we as believers today experience righteousness, peace, and joy, we are getting a foretaste of what our experience will be forever, except to a much greater degree.

14:18. The believer who serves Christ, rather than his belly and his own private desires, in these things, that is, in “righteousness, peace, and joy,” is well pleasing to God. This will be seen at the Bema (14:10-12).

In addition, such a believer is approved by men. Paul is talking about fellow believers from within one’s own assembly. They approve of such service of Christ. The world does not.

The stronger brother knows that there are no longer any unclean foods. Thus, he might well reason that he will not give up foods that God has given him to enjoy simply because of the sensitivities of an ignorant fellow believer.

Yet this is not a proper way to treat the weaker brother. The stronger brother is the one who should freely give up his rights so as not to hurt his fellow brother.

14:21. It is good not to eat meat nor to drink wine nor to do anything that causes one’s brother to run into an impediment or to be ensnared or to be made weak.

Edification of our fellow believers (vv 19-20) is the goal in all we do, including eating and drinking. Paul is concerned here with what we eat and drink when in the presence of other believers and
not what one does in private.

14:22-23. The question for the weaker brother is to the point: Do you have faith? The intended answer is yes and is in regard to the eating or non-eating of meat.

Paul’s command is to have this faith by yourself [i.e., personally and privately] before God.

The blessing here is to the one who does not condemn himself for the thing which he treats as acceptable. It is better not to eat certain foods or to drink certain drinks if the result of that eating or drinking is that one has violated his own conscience.

And whatever is not by faith is sin means that the way in which we live the Christian life is by living out what God has impressed upon us from His Word. If our actions are not by faith, that is, if our actions contradict what we believe the Scriptures teach, then they are sinful actions, not godly ones.

14:24-26. At this point most Greek manuscripts of Romans contain three verses which the Critical Text reserves till the last three verses of the entire book (i.e., Rom 16:25-27). The Critical Text reading not only is not supported by the external evidence, but it is unlikely contextually that Paul would add a benediction after he gave his famous closing words, “The grace of our Lord Jesus Christ be with you all. Amen” (Rom 16:24). In none of his other epistles where this saying occurs with an Amen are any other words given after it (i.e., Gal 6:18; Phil 4:23; 1 Thess 5:28; 2 Thess 3:18; Phlm 25).

This is a fitting conclusion to chap. 14 and Paul’s admonition to show love to the weak.

Treating other believers in a loving manner requires an ongoing focus on God, the One who is able to establish us. Believers are not guaranteed that they will please God. But they are guaranteed that God is able to cause them to please Him.

Paul’s readers knew this to be true based on Paul’s gospel, the message [or preaching] of Jesus Christ, and based on the mystery. When Paul uses the expression the mystery, he is referring to something not previously known. Specifically, he is talking about the church, the Body of Christ, made up of Jews and Gentiles united in one body, which was kept silent through past eternal times.

The church age is a fulfillment of the prophetic Scriptures. Though without the further revelation of the NT one would not understand the OT texts which prophesy about the church, such texts
reveal that Gentiles would one day have a prominent God-honoring role in God’s household. The church is designed to be a God-honoring body and to do so there must be unity and love.

The obedience which God desires to flow from faith in Christ includes, indeed is epitomized by, stronger brothers showing loving deference to weaker brothers. This involves areas such as eating, drinking, and the observance of special days.