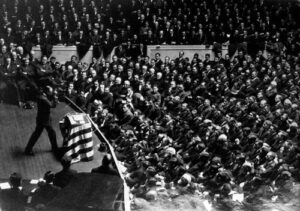 Dallas Willard wrote a section on “Discipleship” for the Oxford Handbook of Evangelical Theology. In it, he gives a concise history of how Evangelicals separated salvation from discipleship.

For example, Willard claims that WWII was great for soul winning, but bad for discipleship. In fact, he denied that Evangelicals had a theology of discipleship at this time:

There has simply been no consistent general teaching or practice under the heading of discipleship among evangelicals of this period: none that would be recognizable as discipleship in terms of biblical teaching or of the Christian past (p. 236).

He points to the Navigators as a sub-group most associated with discipleship. However, he criticizes their idea of discipleship as training people to do evangelism: “in them the essential disconnection between post WWII evangelicalism and discipleship prevailed and still prevails today” (p. 237).

Correct Belief is not enough

In Willard’s opinion, failing to call Christians to obedience as a part of salvation led to bad theology and a lack of disciples. Willard argues the WWII era theologians overly stressed “correct belief alone,” and separated salvation and discipleship, which in his view was never the case in Scripture (p. 237). He claims that Evangelical theologians became too focused on defeating threats from science, liberal theology, and hostile worldviews, and failed to encourage those being taught to step out of “nominal Christianity.”

As we have noted, Post-WW II evangelicalism does not naturally conduct its converts and adherents into a life of discipleship, nor into pervasive Christlikeness of character—with the routine, easy obedience that it entails. What this most recent version of evangelicalism lacks is a theology of discipleship. Specifically, it lacks a clear teaching on how what happens at conversion continues on without break into an ever fuller life in the Kingdom of God (p. 245).

The Problem with Willard’s Definition

One can agree with Willard that the post-WWII church focused too much on the evangelistic portion of the Great Commission “Go.” The word go in the Greek is poreuthentes, and it has a very complicated definition…it means go.

Believers are commanded to get up and move. And while you go, sharing the gospel is implied.

The problem with Willard’s definition of discipleship is his poor understanding of salvation. He believes that salvation requires obedience and sacrifice and that ultimately it can be costly. If that were true, then salvation would no longer be by grace, nor be a free gift (Eph 2:8-9).

Willard quotes Paul: “work out your own salvation with fear and trembling” (in Phil 2:12). He claims that verse shows that salvation and discipleship are one: “this calling and reality was not thought by earlier evangelicals to be for a special group of people” (p. 240). Willard is claiming that a believer must work for and at salvation. Paul contradicts this statement in Galatians 3:

While Discipleship Takes Work, Salvation Is a Gift

Willard fails to see the difference between the free gift of eternal life and a choice to follow Jesus in discipleship.

Scripture speaks of individuals having salvation and rejecting discipleship.

John 8:31 says a group of Jews believed in Jesus, and He told them the next step was to be in His teaching (v 32).

In John 2:24, Jesus would not trust Himself to those that believed. That is, Jesus did not spend time developing them into disciples because He did not trust their hearts.

In the Epistles, Paul says the Corinthian church cannot be talked to as spiritual people (1 Cor 3:1), although he addresses them as brothers; he speaks of growing into maturity as a man and doing away with childish things (1 Cor 13:11).

Paul tells Titus the Cretans are wicked, lazy and not to be trusted, but rebukes them so they can grow in their faith, implying they were believers (Titus 1:12-13).

The writer of Hebrews says his readers should be teachers, meaning they should have excelled in discipleship to the point of being teachers (Heb 5:12-14). What that means is someone can accept the free gift of eternal life, while rejecting the cost of discipleship.

In ancient times, there was a line between agreeing with a rabbi and following one.

The one that agrees could understand, trust, and believe a rabbi’s teaching, but he did not have to commit to modeling his life after the rabbi. And not every Jewish person became a scribe or
Pharisee—that was only for the dedicated.

Believers in Jesus can fall in the same categories. You can agree with His teaching on the law, believe that His word is true, and believe in Him for eternal life (1 Tim 1:16), but that does not mean you have made the decision to drop all and follow Him in discipleship. “[T]he premiere experience for the Christian is to embrace both salvation and discipleship as two critical aspects of a saved and abundant life.” (Kitchen, Salvation and Discipleship, p. 25).

Discipleship is not a co-condition with faith to have eternal life, and your success or failure as a disciple does not alter the fact of your salvation. Salvation and discipleship are distinct. Jesus both offers salvation freely (Rev 22:17) and wants all believers to grow in Him through a commitment of discipleship. To put it simply, “Salvation is free, but discipleship is costly” (Bing, Grace, 71).

In Jesus’ time rabbis and Pharisees called their decision to follow a rabbi being yoked to them, meaning they would try to live under the burden of their specific interpretation of the Law.

Likewise, Jesus described His own teaching as a yoke that was easy and light (Matt 11:30). The yoke was His instruction to His disciples of what it takes to follow Him and live by His lifestyle. When Jesus says “‘follow’ Jesus refers to becoming a disciple.” (Bing, Grace, 75). The flaw in Willard’s view is a failure to see Jesus’ command in Matthew 28 is to “make disciples.”

Believers are converted, but disciples are made. The Greek word for “make disciples,” mathēteusate, means to create or make a learner. “A disciple is someone who is saved and in a learning or growing posture in relationship to Jesus…a Christian is someone who believes in Jesus Christ as Son of God who died for sins, rose again, and guarantees salvation” (Bing, Grace, pp. 3-4). The mature are being called to guide, direct and instruct individuals. They are called to help change people into followers who live God’s Word.

Jesus’ approach kept the ingraining method of a rabbi teaching all He knew of Scripture, application, practice, and interaction with both man and God. Jesus formed disciples, instilled application and life into those that followed Him, and that is how the Church should make disciples.

Jesus was a rabbi to His followers and they were His disciples. This system of mentorship was common in ancient cultures. Men such as Socrates, Philo, and Herodotus trained their groups of students to apply their theories and philosophies to life. Bill Hull notes, “Plato, Socrates, and Herodotus all used disciple to mean ‘learner’ or ‘one who is a diligent student’…philosophers generally understood that the disciple’s life involved apprenticeship, a relationship of submission, and a life of demanding training” (Hull, The Complete Book of Discipleship, pp. 53-54). Scripture mentions other groups of disciples, i.e., Jesus’ twelve disciples, John the Baptist’s disciples, and the Pharisees’ disciples (John 1:35; 3:25; Luke 5:33; 7:19 ). Paul, when he was known as Saul of Tarsus, was being discipled by Gamaliel, a Pharisee and member of the Sanhedrin (Acts 5:34; 22:3). The Talmud and Mishnah also mention how rabbis followed this style of training. Discipleship was not the creation of Jesus, though He used it to create a movement.

Discipleship was not just the practice of Jesus or of the Jewish people; it was a widespread practice of teachers to learn how to model life (Matt 16:24-27). The beginning of Christian discipleship was born with the Jewish Rabbi/Messiah/God in flesh calling a group of twelve to follow and giving them a command to become multipliers. The importance of the command to make more learners was not lost on His eleven remaining followers. Historical accounts show Peter and John discipled Clement of Rome (The Complete Book, pp. 53-54). John is believed to have discipled Ignatius, Polycarp, Clement, and Papias, who in turn had disciples of their own (The Complete Book, pp., 78-79).

Paul was also busy in discipling the next generation of followers. Acts and Paul’s Epistles record him mentoring Silas, Luke, John-Mark, Timothy, Titus, and Onesimus, among others. Yet, even though Paul, and any other follower of Jesus, was in the role of a rabbi or mentor, his goal was not to create more Pauls, as was the goal of the Pharisees and rabbis, but to point them back to Jesus ( 1 Cor 11:1). Jesus called His disciples to create other disciples of Him, not themselves. Paul’s disciples would influence and grow the churches he planted (Acts 17:14; 1 Tim 1:3; Titus 1:5). The command to make disciples was not broken. The disciples carried the teachings of Christ and passed them on to faithful men who would continue sharing (2 Tim 2:2). Since the early days of the Hebrews, discipleship was a style of life that was demanding and not for all. Though all enjoyed the local rabbis teaching, only a few chose to sit at his feet and model his teaching and lifestyle. This is what readers should keep in mind as they see teacher, rabbi, and disciple in the NT.

In Answer to Willard

How should we respond to Dallas Willard’s understanding of discipleship?

Let us start by saying he is right that many Christians have lost their way concerning discipleship.

How should discipleship work?

Spiritually mature believers should guide the immature in application, understanding, and lifestyle. Living Jesus’ word is costly; just try living the Sermon on the Mount and see how difficult and painful that is. But things that take effort are worth it because they make us more like Him (Matt 10:25). The mature cannot force the walk of discipleship on baby or rebellious believers; that is why discipling takes great patience (2 Tim 4:2). Everyone who believes in Jesus has eternal life (John 6:47), but not every believer becomes a disciple. Instead, be wise disciple makers find the faithful, able and teachable (2 Tim 2:2), and then you can say. “follow me as I follow Christ” (1 Cor 11:1).

Cody Wallace is senior pastor of Southwest Community Church in Miami, FL. He is married to Meg and they have three children.