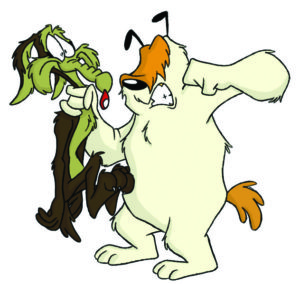 Ralph is a wolf. Sam is a sheepdog. Each episode of the old Looney Tunes cartoon featured Ralph trying to find ways to get past Sam so as to eat the sheep under Sam’s protection. Every encounter is laced with violence as Ralph and Sam try to maim or kill each other in their natural roles as mortal enemies.

But the somewhat unique feature of their rivalry is that each episode starts with Ralph and Sam arriving at starting time, punching in on a time clock, exchanging pleasantries, then heading off to work to try to kill each other. Then again at the end of each day the shift whistle blows, they each stop what they’re doing, report to the time clock, punch out, and say their pleasant goodbyes for the evening, “Goodnight Ralph, see you tomorrow… Goodnight Sam, say hi to the wife for me…”

In other words, their roles as mortal enemies were only on display during working hours and weren’t their real nature.

I had an experience at Dallas Theological Seminary in the early 90s that brings this cartoon to mind and made me wonder if everyone who promoted the Reformed/Lordship theological positions really believed in their positions or if it was more like their “day job” to promote a particular position.

When I started attending DTS in the late 1980s the Lordship Salvation debate was nearing its peak. John MacArthur had just released The Gospel According to Jesus (1988). It was largely in response to Zane Hodges’s The Gospel under Siege.

For the most part the DTS seminary community seemed to side with the MacArthur/Lordship position, usually arguing that it aligned better with Reformed theology’s concept of perseverance of the saints, which among other things said that since faith itself was a gift, one could never lose that faith, and if one ever did lose their faith (i.e., if one committed apostasy), it proved conclusively that the faith was never real in the first place.

That was the popular position at DTS at the time.

I really liked and appreciated one of my professors at DTS. However, he and I held different views of the doctrine of salvation. He fully embraced Lordship Salvation and the doctrine of the perseverance of the saints. He promoted that view in class as often as context allowed.

But then one day he mentioned that his father had died as an unbeliever, but that it gave him some comfort to consider that perhaps at some point during his father’s earlier life he may have heard and believed the gospel.

That shocked me. This sounded like after-hours theology, not the kind of thing a Calvinist professor says in class! It certainly didn’t coincide with the official day job theology we heard in class every time the topic came up.

In our private meeting I restated what I heard him say about his father in order to confirm that I understood him correctly. Then I summarized his view of apostasy and perseverance. He agreed that my understandings were correct on both points.

Logically one would suspect that after confirming both those points he would see the contradiction between them without me needing to press further. But if he did see it, he never let on.

So I reasoned with him that if apostasy (loss of faith) proves one never had faith, and if his dad died a non-believer, then the only consistent conclusion would have to be that his dad never had faith and died unregenerate.

I don’t remember his exact reply, but I distinctly remember leaving the meeting feeling like he didn’t have an answer and didn’t want to delve more deeply into it. I caught him in a clear contradiction.

But, then the whistle blew, and we punched our time clocks, wished each other well, and went our separate ways.

We Should Be Consistent

I suppose to some it could have been seen as somewhat cold on my part to try to use this contradiction to disprove his theological position, but I don’t see it that way.

Either it is true that any degree of apostasy is possible in a believer without jeopardizing his eternal salvation (or necessarily disproving the reality of his faith), or it is false, and if one dies an unbeliever he is condemned to eternal separation from God (as the Reformed/Lordship position maintains).

One cannot have it both ways… believe the Lordship/Reformed position in class where he’ll maintain his “in crowd” status, but when it’s convenient and when it provides emotional comfort believe the Free Grace position.

Life isn’t a cartoon, and what we profess to believe should be consistent.

At the time of this class my own father was very ill and had not given any indication that he believed in Christ for everlasting life. My situation was much the same as my seminary professor’s. My dad never did recover and died a little more than a year later.

Like my seminary professor friend, I did derive comfort from realizing that my dad may have heard and believed the gospel at some previous point in his life.

I’m glad I hold to a theology I can believe all the time.

Bob Thomas has a Th.M. from Dallas Seminary (1994). He has an online business and does contract software work.