On Thursday, August 16th, 2018, the world lost one of its great voices, the “Queen of Soul”—Aretha Franklin.

She was perhaps best known for her recording of the song “Respect.” But, perhaps few know that the song was originally written by a man—Otis Redding.

Redding wrote and released the hit song “Respect” in 1965, which went on to be reworked and popularized by Aretha Franklin.

Redding’s version is a plea from a desperate man who will give his woman anything she wants. He doesn’t care if she does him wrong, as long as he gets his due respect when he brings money home.

By contrast, Franklin’s version of the song was about a strong, confident woman’s demand for respect from her man.

Her version was quickly adopted by both the Civil Rights movement and the feminist movement.

Men and Women Are Wired Differently

In his eye-opening book, Love & Respect, Dr. Emerson Eggerichs points out that:

Aretha had the right to sing ‘R-E-S-P-E-C-T’ from a female point of view, of course. A woman does need respect. And if a man loves her properly, she will get that respect. But the primary meaning in Otis Redding’s song is a cry from a man’s deepest soul that says respect is what he needs and he’s “got to have it” (p. 47).

The main premise of Dr. Eggerich’s book is that men and women are wired differently.

A man’s deepest need from his wife is respect.

A woman’s deepest need from her husband is love.

However, in times of conflict, the wife’s first instinct is to respond in a way that communicates a lack of respect.

Conversely, when faced with conflict, a man will usually act towards his wife in an unloving way.

This perpetuates what Dr. Eggerich calls the “Crazy Cycle”—a cycle which quickly degrades relationships and leads to unhappiness, marital strife, and divorce, but is possible to avoid. Dr. Eggerich draws heavily from Ephesians 5 as the basis of his book. 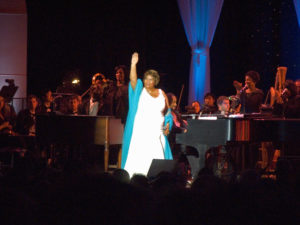 Paul spells it out: God wants wives to submit themselves to their husbands.

Submission is the act of accepting or yielding to the authority or will of another. It speaks of humility and meekness—the same kind of humility we see in Christ submitting to the will of the Father.

The command for wives to give respect to their husbands is also unconditional. Of course, if a wife is asked to partake in sin, a woman’s higher duty is to her Lord, Jesus Christ. She must submit to her Savior before all else. This also isn’t a call to remain under abusive conditions that endanger herself or her children.

Yet the command does not depend on reciprocal submission—i.e. I will only submit to him and respect him if he acts in a loving way toward me. The command is unconditional.

Husbands, love your wives, just as Christ also loved the church and gave Himself for her…So husbands ought to love their own wives as their own bodies; he who loves his wife loves himself. For no one ever hated his own flesh, but nourishes and cherishes it, just as the Lord does the church.

Wow! Did you hear that guys? God tells husbands to love their wives “as Christ loved the church and gave Himself for her.” To what extent did Christ love the Church, His bride? To the extent that He died for her.

And let’s not forget our position towards God when Christ died for us. It was while we were enemies of God that He chose to die for us. God loved his bride, the Church, unconditionally, while we were still estranged from Him.

In this case, as with the command to wives, it is also unconditional. Men are called to love their wives regardless of whether they are being respected or not.

I don’t know about you, but that seems like a tall order.

The nature of both commands—to both wives and husbands—is wholly unnatural, given our fallen humanity.

When a man is disrespected, it’s not in his nature to respond in love. A man will interpret a lack of respect and submission as contempt, plain and simple.

Likewise, when treated in an unloving way, it’s not a woman’s nature to respond with respect. She will fear that if she gives her man respect when he doesn’t deserve it, she will become a doormat.

Yet, both commands are unconditional.

There’s no wiggle-room given to either husbands or wives. Both commands are a call to “submit to each other in the fear of God.”

God wants men and women to lay down their wills and serve one another. This is only something that can be accomplished by the power of the indwelling Spirit of Christ working in us and through us. It’s a call to grace—a call to show grace to those we deem least deserving—since Christ showed us grace when we were at our worst.

On a practical note, this looks like encouraging one another and forgiving each other freely and often.

Love, true love, is meeting each other’s needs, like it or not, for richer or poorer, in sickness and health. We must choose to believe the best about each other and see the value and worth of each other. Whenever conflict arises it’s rarely, if ever, because one individual is acting maliciously or out of spite. One or both parties are most often simply being misunderstood. Marriage is difficult, if for no other reason than it joins two sinful, selfish people in lifelong commitment.

He not only designed men and women individually as separate creatures, but He also designed the institution of marriage as a picture of His grace. Our relationships and marriages ought to mirror the submission and love that Christ exhibited in dying for a fallen world. Any conflict is not an opportunity to harbor resentment and hurt, but to show the grace we so often hear about and preach. It’s an opportunity to be a conduit of God’s grace, under the power and direction of the Holy Spirit.

Otis Redding may not have been aware that he was doing so, but he was actually echoing what God wrote through the Apostle Paul nearly two thousand years earlier.

David Bechtel is an artist and writer. He lives in Houston, TX.