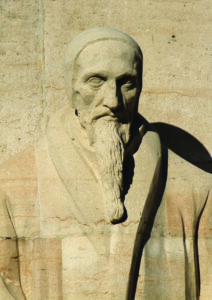 Question. I see a lot of people turning to Calvinism. I believe God in His sovereignty gave us free will, and He does intervene on earth, but that doesn’t take away our free will. I just wanted to ask what the church believed before Augustine (300-400 years after Christ)? Also, Calvinists aren’t Roman Catholic, yet they hold to Catholic doctrine. Why?

Answer. Great to hear from you and to try to answer your great question. I can tell you’re seeking the right path. I’ve written a book dealing with Calvinism as a whole, and it might be helpful. Right now, I’ll just deal with your question.

I think that there are several reasons why people turn to Calvinism. Part of it is psychological. To be included under such a broad umbrella gives a person a certain amount of psychological security and a feeling of safety. Who’s going to seriously be threatened when so many people believe it?

Another psychological reason is the felt need to be included in a group.

Further, the very teaching of Calvinism is that an elect group of people, those God chose before the foundation of the world, are special to Him. This puts the Calvinist in an elite cluster and produces, I think, a certain amount of pride. “God chose me, but not most other people.” This creates a false sense of spirituality.

Calvinism offers a structured doctrinal position which, in itself, is logical, but it is totally unbiblical. Folks seem to be drawn to that which is apparently logical. They can fit into the system that way.

I made a point in my book to show that not a single one of the Calvinist doctrines—i.e., the five points of Calvinism (TULIP)—is supported by even one passage of Scripture, understood correctly.

They say, for instance, that we are such fallen creatures that we are unable to believe and be saved. But all through the Bible we are urged to believe in Christ. Faith is what it’s all about.

They say that God selected only some, but not others, for eternal life. Somehow, they feel that this glorifies God, but in reality, it makes God arbitrary and unloving. They deny that God loves everyone.

Further, they say that Jesus just died only for those that God supposedly selected, whereas several Scripture passages indicate that He died for all (e.g., John 1:29; 2 Cor 5:19; 1 John 2:2).

Calvinists say that since man has no actual free will to look at the facts of the gospel message and consider them so as to believe, or be convinced, about the message of life (i.e., the offer of everlasting life based on God’s promise with the sole condition of faith or belief). God must impose His will upon those He has selected and essentially regenerate them so they are able to believe. Somehow this avoids God’s plan being defeated by man’s rebellion.

Finally, Calvinists say that one’s success in the Christian life is also a condition for being considered saved and for having assurance of salvation. They leave no room for a believer to fail or to make his own choices after he becomes a believer. As for what the church believed prior to Augustine, we should realize that the early church was involved in a process of systematizing the truth of the Scripture for several centuries. I suppose it’s still doing so. Augustine was probably the first major theologian who was influenced by Greek philosophy, particularly Manichaean dualism, among other things. This involved the idea of fate being a determining factor of what occurs, and he just worked that idea into the doctrine of unconditional election. Unfortunately, the Reformers of the 16th and 17th centuries took their lead from Augustine and worked his deterministic views into their own theology.

Thank you very much for your question. I hope this helps.

Question. A video pastor of Columbus Bible Church says that OT believers are not in heaven, but Sheol. If OT saints are still in Abraham’s bosom (Luke 16:19-31), where do tribulation saints go when they die? Are they in heaven based on Revelation 6:9?

Answer. The video pastor begins with an unfounded assumption that the OT saints, i.e., OT believers, are indeed still in Sheol/Hades. However, there is no Biblical indication that they are the same group as in Revelation 6. He essentially claims that those who were believers in the OT had not been led to heaven when the Lord Jesus ascended. He also indicates that the Tribulation saints in Rev 6:9 are not in heaven, where the altar is, but are with Abraham in the center of the earth.

In Rev 6:9 the Apostle John sees the souls of faithful believers who will be slain during the Tribulation. That is the period of time that he is referring to. Their location is stated to be under the altar in heaven. No altar in Sheol is ever mentioned in Luke 16 or anywhere else. The location of the Rev 6:9 vision must be in heaven. It is noted that it is the souls of those slain, not their bodies that he sees.

It seems that this video teacher rejects the idea that Rev 6:9 refers to dead Tribulation saints being in heaven. He goes on to explain what he calls conventional teaching that the OT saints remained in Abraham’s bosom until Jesus ascended to heaven. However, he fails to give the basis for such teaching in his attempt to explain things his way. The basis for the teaching is found in Eph 4:7-8 which says, “But to each one of us grace was given according to the treasure of Christ’s gift. Therefore, it says, ‘When He ascended on high, He led captive a host of captives and He gave gifts to men.’” The apostle is giving a basis for the giving of spiritual gifts in this church age. It is usually understood that the statement “When He ascended on high, He led captive a host of captives” indicates that He transported those with Abraham from a place called Paradise (Luke 23:43) into heaven since He had paid the full price of sin with His blood. It was not their bodies that were transported to heaven, but their disembodied souls. The pastor in this video somehow failed to give the reasoning behind this teaching. He gives the implication that this view is old-fashioned and, therefore, incorrect.

This video pastor seems correct that those of the OT period expected to be resurrected on the earth. Isaiah 26:19-20 teaches that they will be resurrected after the time of Tribulation. He misapplies 2 Cor 5:1. Paul simply means that God will one day give every believer glorified bodies when He returns. The complete verse says, “For we know that if the earthly tent which is our house is torn down, we have a building from God, a house made with hands eternal in the heavens.” He goes on to indicate that the OT saints are looking for a resurrection on earth and did not anticipate going to heaven. He then proceeds to Rev 20:4 and argues that the Tribulation saints did not anticipate going to heaven either. He essentially claims that they look forward to a resurrection on earth. But so do we in this church age. That we all look forward to a resurrection on earth does not indicate the location of our disembodied souls after death until then. He confuses the temporary state of our souls between death and resurrection with what we expect to be the final destiny of our resurrected bodies for all eternity.

I hope this answers your questions satisfactorily. May the Lord bless you in your search for the truth.

Anthony Badger has a ThD from Dallas Seminary and is the author of Confronting Calvinism, available in the bookstore.