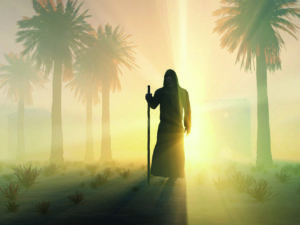 Blessed are the poor in spirit, For theirs is the kingdom of heaven (Matt 5:3).

With these words the King opens His famous Sermon on the Mount. He has been proclaiming a message that declared: “Repent for the kingdom of heaven is at hand” (Matt 4:17). So He opens the Sermon with a reference to those who will possess that kingdom.

And seeing the multitudes, He went up on a mountain, and when He was seated His disciples came to Him. And He opened His mouth and taught them, saying… (Matt 5:1-2)

We might compare this scene to a university lecture hall. The professor has his regular students before him, but his lecture is open to the public. Although he is primarily addressing his class, the professor will not forget that others are present as well.

The Sermon on the Mount was primarily for the “pupils” of Jesus. (The Greek word for “disciple” means “pupil”!) But our Lord does not lose sight of the larger audience. Among other things, He warns them to “start out right” by entering through “the narrow gate” (Matt 7:13). In light of the rest of the New Testament, this can only refer to man’s narrow and restricted way to God, which is by faith alone in Christ alone.

Discipleship, of course, can be begun before true saving faith occurs. Many unsaved people attend good Bible-teaching churches and are “students” of God’s Word before they trust Christ as their sole hope of heaven, totally apart from all works. But if the narrow gate of salvation is not entered first, such discipleship can fail miserably. It did so with Judas and other unbelieving disciples mentioned in John 6:64-66.

But it is vital to keep in mind that the Sermon on the Mount is basically a “lecture” to disciples. No doubt it was read exactly that way by the first readers of Matthew’s Gospel. And it should be read that way by us.

In this light, then, the opening words of the Sermon do not tell us how to “enter” the kingdom of heaven. They say nothing at all about “entering.” Instead they tell us how that kingdom can be possessed—how it can be ours!

The kingdom, Jesus informs us, will belong to those who are “poor in spirit.” That is to say, it will belong to His disciples who have learned true humility and submission of heart toward God. It is such people who will possess the kingdom. But it is kings who receive and possess kingdoms (see Luke 19:15; Dan 7:18 compared with 7:14). So, humble disciples will possess the kingdom in the sense that they will co-reign over it with the King of kings. Jesus taught this elsewhere as well:

To him who overcomes I will grant to sit with Me on My throne, as I also overcame and sat down with My Father on His throne (Rev 3:21).

Through God’s grace Christians are called to be victorious over pride and self-will in their own hearts. By pronouncement of the King Himself, His kingdom is the special possession of the “poor in spirit”!

This article appeared in Grace in Focus in May of 1991.