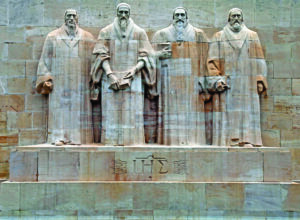 You Can’t Be Sure?

They threw it all at me—all of it. They said that before the fall of man, God ordained who would be saved. They told me I was dead, a corpse, unable to receive the gift of grace unless it had already been chosen for me. I had to be regenerated before I could believe, and God did all this lest I consider myself a merit monger claiming credit for my salvation.

It was all very confusing.

I told them Billy Graham said a person could be sure of his eternal destiny. They answered that Graham wasn’t a theologian and therefore was not an expert in the matter.

A bona fide theologian did tell me, “You don’t go to heaven by faith alone. Eternal life fully depends on whether we have been freed from sin by faith in Jesus and whether we go on living under the rule of God. It is safe to say that without either the decisive part or the progressive part of sanctification, we have no hope to be saved in the end.” His statement sounded like works salvation. He admitted he did not think salvation was truly by faith alone. But many insisted that type of theology still counts as faith alone.

After this, I read Calvin’s Institutes. He wrote, “God has no redeeming interest in certain people.” In other words, God sees five people drowning, saves two, and leaves the other three to die. Calvinists call that double predestination. That view of God didn’t seem right. But they told me that God’s ways are not our ways, and we shouldn’t use our own logic to try to understand the Lord.

I read Bonhoeffer because of his unbridled courage in the face of Nazism. But Bonhoeffer wrote, “Scripture must be interpreted and preached. In its essence it is not a book of edification for the congregation.” This startled me since it flies in the face of Luther’s insistence on the priesthood of all believers. Bonhoeffer also complained that the NT was too overgrown with “redemption myths.” But Christianity has always been regarded as a religion of redemption.

I remembered the word “propitiation”— that God is satisfied with Christ’s death. I was one of His, a part of His family. And when I believed in Him, I was baptized by the Holy Spirit and had “positional sanctification.”

But they often said that’s not quite right. “You must persevere until the end of your life.”

I mentioned the thief on the cross, but they told me that Jesus promised him heaven before the crucifixion, so atonement was not yet actualized at that point. That seemed strange to me.

I understood justification and sanctification—the former meaning the baby is born, and the latter meaning how well the baby is growing. To me, that was easy to understand. Salvation and discipleship are two separate issues. But they said, “Salvation is free, but it will cost you everything.” People complicated it again. They put those two concepts of salvation and discipleship together and wouldn’t separate them.

They agreed that David and Solomon were in heaven despite some terrible deeds, but they never explained why. David broke the Ten Commandments, but he still had salvation. Solomon did not persevere in good works at the end of his life.

But they didn’t know the difference between eternal salvation and maturing in our journey of sanctification.

They didn’t know of God’s chastisement of lazy believers.

Some didn’t acknowledge crowns and rewards for believers who will be judged for their works.

No one understood the difference between the Judgment Seat of Christ and the Great White Throne Judgment—they lumped them together.

I read the NT. Except for John’s Gospel, most of it is written to believers. People said, “I don’t think that is a fact,” or “Those writings are to believers and unbelievers.”

So I went book-by-book to prove that the epistles are to believers, urging them to be better disciples and that they concerned degrees of fellowship.

By contrast, John’s Gospel is about how to get eternal life if you are an unbeliever (John 20:31).

When I told people this, none of them understood the distinction and passed over it quickly.

I counted the word “believe” almost 99 times in John’s Gospel. Jesus tells unbelievers how to get salvation and be sure of it.

When I mentioned the Gospel of John never lists submission or repentance or obedience to receive everlasting life, they said, “That is an argument from silence,” or “So what?” or “Those three words [submit, repent, obey] occur in other parts of the NT.” I said yes, they are mentioned, but in the context of believers. They were not convinced. One deacon told me I am a heretic because I pointed out that repentance is not mentioned in John’s Gospel. No one in the class wondered why John omitted the word. They said repentance is essential, and I agreed that it is essential for one who is already a believer, but not essential for one to become a believer. To them, that was heresy.

I knew salvation is a free gift, but I was accused of cheap grace and semi-Pelagianism.

Some said even the demons believe. I agreed, but the demons are not candidates for eternal salvation and thus do not believe in Jesus for eternal life. Jesus died for human beings, not for demons.

It is lonely to have all these thoughts.

I have respect for other Christians, but I think some teach error. Unlike what I have had others tell me, I want to tell people the truth of salvation. I want to go to a person and tell him, “Based upon your testimony to me about your believing in Christ, you have everlasting life and eternal security.”

I have read Calvin, Edwards, Bunyan, Spurgeon, Ryle, Lloyd-Jones, and a host of men like them, and I find their expositions of Scripture to be in-depth and helpful in many ways. But I also find it hard to believe that my entrance into heaven depends on persevering in works. So I part with those men on how to get eternal life. I am sticking with John’s Gospel!

Andrew Engelman is a Soviet refugee and has lived and worked all over the world for multinational companies. Married for 51 years, he has two daughters and five grandchildren.