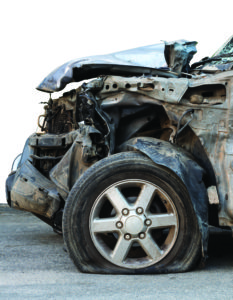 The sixth of February is always a difficult day for me.

On that day, during my freshman year of college, I was riding with a car full of friends to a local restaurant when a drunk driver hit us head-on.

There were five of us in the car, and two more in the car behind us.

I remember hearing the sounds and screams and the impact of the airbag.

I also remember everyone beckoning me to get out of the automobile.

They had all walked away, but I could not. My right femur was snapped in two.

I kept drifting in and out of consciousness.

I remember the Jaws of Life cutting me out of the car, the pain of being put on the stretcher, the agony of having the bone set and putting on a temporary splint.

I remember the ride from one hospital to another and hearing words such as “lucky,” “blessed,” and “second chance.”

I recall having a discussion with the firemen about Christ.

Early the next morning, I had a titanium rod inserted through my femur. It runs from my hip to my knee. The pain of the accident developed into the pains of recovery and rehabilitation.

Those were dark days for me spiritually.

In the confusion of trying to understand what had happened, I grabbed onto Calvinism. I heard so much about it at college that it seemed right. I had been preaching in churches since I was twelve. I was a firm legalist (I would not have called myself that then). I did not deserve this tragedy and I was angry. Calvinism was the lifesaver that I grasped onto.

I comforted myself with the idea, “God caused this.”

As I continued on in Lordship Salvation for many years, the anniversary of the accident became a type of progress report or performance review. I would sit down and make a list of all my failures and see if I had wasted my second chance at life. I used it as a day to beat myself up. When I looked at how little I had accomplished in the past year I questioned my own salvation.

In those days I did not realize that I could not live the Christian life.

The psychological stress caused by the accident was enough to endure without me putting such an enormous burden on myself.

However, since coming to Free Grace Theology, I can now use this anniversary as a time of praise and devotion. I am thankful for the grace shown to me. I am not called to prove I’m born again; I am called to abide in Him and in the certain knowledge that I have everlasting life and can never lose it.

I know that every day is a gift from God and I must strive to live in light of eternity.

My days of limping and weakness are the avenue for the strength of Christ to shine through (2 Cor 12:9-10).

Those early days and years following the accident were many days and nights of wrestling with God. By His grace, I want my days to end like Jacob. “By faith Jacob, as he was dying…worshipped, leaning on the top of his staff.” Limping and leaning has made me to see the grace of God in a way that I would be blind to without it.

My days are not pain free, but they are freeing because of grace.