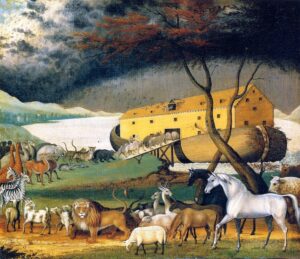 In late 2021, I preached through the story of Noah for the second time in my pastoral ministry. As I began the series, I took a moment to look back on what I wrote on Noah in 2009. I cringed when I saw the title of the second sermon in the series. “Noah: Faith + Works = Salvation.” I concluded the sermon with the following words: “We need faith in the work of Jesus Christ. Without faith in what He has done, no one can be saved. But faith alone is empty. It is worthless. We need real faith that results in works.”

Thanks to the eye-opening works of Zane Hodges and others, I have come to see how my previous view of saving faith distorted the wonderful free gift of the gospel and also opened my eyes to the depth and breadth of God’s salvation found throughout the story of Noah.

Noah was a man saved by faith and by works. I was right on that point. But I went wrong where so many other students of the Bible have been shipwrecked. Noah’s faith seen through God’s grace brought one kind of salvation. Noah’s works seen through the construction of the ark brought another.

The definitive moment in the story of Noah occurs in a brief verse where our great ancestor did nothing:

In Gen 6:1-7, while Noah’s generation was falling into the worst abuses of the image of God in human history, Noah found favor or grace with God. Today, especially in light of Gen 6:9, a reader may be tempted to believe Noah earned this favor through righteous and blameless living. Allen Ross, in his commentary on Genesis, points out that this Hebrew word for favor most often means not only an unmerited grace, but a favor given when one is in a position to deserve the opposite, i.e., judgment.

The first eight verses of Genesis 6 open with the depths of man’s violent and sexually perverse depravity. The conclusion of this cold darkness is the warm light of grace. Grace was given to Noah, not as a reward for victorious living, nor as a payment for faithful living, but because the Lord looked upon Noah and gave him a gift in love. Noah rightfully should have been swept away with his generation, but he was instead offered salvation in friendship with God.

It may not appear obvious in our English Bibles, but there is a clear narrative break between Gen 6:8 and 6:9. The first words of “These are the family records of Noah” (CSB) inform the reader of the beginning of a new narrative section. Moses structured Noah’s story to clearly separate his deeds from God’s grace. God did not provide favor to Noah on account of works. God entered into a relationship of favor with Noah when he deserved no such special treatment. The faithfulness of Noah is only praised following God’s grace.

This is a beautiful picture of our salvation to eternal life. There is nothing the sinner could ever do or say to merit the favor of God. In fact, we all deserve God’s judgment and not His grace. In righteousness and fairness, Jesus should have come as judge to ruin and destroy our race. In grace, Jesus came as a lamb to die for the sins of the world.

Noah was set apart from his world for salvation, but not on account of his skills as shipwright or animal tamer. Instead, he came into a relationship of peace with God by grace alone. No works required.

If everyone was cautious and careful in our Scripture reading, it would bring us to one obvious conclusion. Noah was saved by grace and brought into relationship with God before he hammered the first nail into the wood of the ark or gathered a single animal. Noah’s eternal place with God as one redeemed by the future death of Christ was settled at the end of the first narrative portion of the story of his life. Genesis 6:8 proclaims the wonders of God’s compassion to save Noah and to save him by grace alone.

In Gen 6:9 and following, Noah is already a saved man—saved by grace through faith. His eternal destiny was settled. Noah is forever a friend of God. Since Noah is God’s friend, it is appropriate now to warn him of the troubling days ahead. God comes and informs Noah of the impending doom of the worldwide Flood, and God provides a way of salvation from the Flood and the judgment coming upon the world. Thankfully, Noah obeys and saves his life to live another 350 years on the earth after the Flood (Gen 9:28).

It’s hard to underestimate Noah’s trust in the Word of God along with his faithfulness to build the ark. Noah believed in a coming Flood when no such disaster had ever been seen on the face of the earth. He worked on building a massive three story ship which would have made him the subject of gossip and ridicule to everyone who discovered what he was up to and why. The perseverance and labor in the building of the ark is one of the most outstanding efforts of human labor in history. Noah was saved by his works when he built the ark.

Second Peter 3:6 speaks to the destruction of the world in the Flood.

Through these the world of that time perished when it was flooded (2 Pet 3:6 CSB).

The Greek word translated as perished is the same Greek word for perish in John 3:16. The destruction or perishing caused by the flood was not eternal death and separation from God, because Peter is speaking of the destruction of mankind and animal life together. Noah was saved from the fate of both the animals and mankind by building the ark. Noah was saved, so he would not perish, but this was not salvation to eternal life.

In Bob Wilkin’s The Ten Most Misunderstood Words in the Bible, he speculates that believers may have died in the Flood. He follows John Whitcomb’s assumption that people could have believed in God’s message of salvation after the rains began to fall, but before they were drowned in the floodwaters. Many could have heard Noah’s preaching and dismissed it as nonsense while the skies were still blue. Once the skies darkened and the thunderstorm of thunderstorms began, they might have seen the wisdom in Noah’s preaching and believed after the door to the ark was already shut by God Himself. This belief would have saved their souls by grace, but their physical lives would have been lost in the floodwaters.

Noah’s story is also told in the briefest of narratives in Heb 11:7:

By faith Noah, after he was warned about what was not yet seen and motivated by godly fear, built an ark to deliver his family. By faith he condemned the world and became an heir of the righteousness that comes by faith (Heb 11:7 CSB).

Noah’s preparation for the ark saved himself, his wife, sons and daughters-in-law. Since Noah could not believe on their behalf to gain eternal life for his children, this must refer to salvation from the floodwaters and not to eternal life.

The mention of Noah’s inheritance as an heir of righteousness tells us the eternal importance of Noah’s obedience to construct the ark. Noah not only brought the temporal blessing of continued life, but he also saved up eternal rewards for glory in an inheritance. The salvation based on works as seen in Noah’s life brings eternal blessings following the pattern of salvation by faith which brings eternal life.

Noah’s work in building the ark saved his physical life. He also saved the lives of his sons, including Ham. Ham is significant, because there is a possibility, based on Gen 9:18-29, Ham may have been an unbeliever. He could have been unregenerate, but was still saved physically by his father’s and his own efforts. Our efforts in obedience to God not only preserve and provide blessings to our own lives, but it also transforms us into preserving forces for those around us, believers and unbelievers alike.

Before having my eyes opened by others in the Free Grace community, I read the Bible with faulty assumptions. I almost always saw salvation as unto eternal life. I never noticed in my own studies on sōzō (Greek verb for saved) how often salvation related to the preservation of physical life. I simply dismissed them as unimportant to a study on salvation.

Thankfully, I now read the Bible and ask basic questions when I come to words that have been filled with theological meanings. What are we saved from? How were those people saved? Is this passage speaking of God’s salvation by grace or another salvation by works?

Noah is a powerful illustration to the church of the importance to look for more than one salvation in the Scripture and our lives. We are saved by grace through faith in Jesus Christ to eternal life. This is the most wonderful and important salvation in world history. At the same time, salvation from the consequences of sin, salvation from enemies, salvation from sickness, and more are still vital forms of salvation in the eyes of a loving Heavenly Father who is compassionate beyond measure. The Father desires to save sinners from eternal death, and He desires to save His children from the negative consequences of a sinful life in this world. May we all be saved by faith and by works.