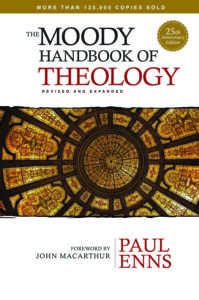 Institutions, especially theological ones, tend to change over time. Most of the time they change for the worse. And there is nothing more dangerous than a downward trend in your understanding of the saving message.

For example, The Moody Handbook of Theology seems to have repented of its view of salvation.

A reader pointed us to a significant difference between the 1989 and 2014 editions under Soteriology:Doctrine of Salvation > Man’s Side >Erroneous Views.

A Crucial Error in Salvation:1989

Here is what the 1989 edition says is the number one error in salvation:

(1) Repent and believe. Repentance should not be understood as a separate condition of salvation for believing in Christ. If repentance is cited as a condition of salvation in terms of feeling sorry for one’s sins, then it is a wrong usage of the term. It should not be understood as a separate step in salvation. Acts 20:21 indicates that repentance and faith should not be seen as separate items in response to the gospel but together they signify belief in Christ. To believe in Christ is to change one’s mind about Christ and trust Him alone for salvation (The Moody Handbook, 1989, pp. 330-31).

That’s more or less a Free Grace view. It makes clear, I think, that works are not part of the condition of salvation.

But that position on faith alone was reversed in the 2014 version.

A Crucial Error in Salvation: 2014

Look what the 2014 edition lists as the number one error on man’s side in salvation:

(1) Believe only. Some say salvation need not include repentance nor spiritual fruit in one’s life, for either one adds works to salvation. Yet repentance is a biblical word clearly related to salvation. Jesus began His ministry with a call to repentance (Matt 4:17)…It can readily be seen that repentance involves not only a change of mind, but a change of direction, remorse for sin, and as a result, a change of life…Such change of mind, and of the whole person, means true belief includes a transformed life—salvation includes transformation…Advocates of “believe only” subscribe to what has been called the “non-lordship view” of salvation—that making Jesus Lord upon salvation is adding a work to the simple act of faith…In summary, lordship salvation stresses that in salvation, a person responds, acknowledging Jesus as Lord of his life (The Moody Handbook, 2014, pp. 344-45).

Did you notice the number one heresy in the new edition?

Is it salvation by works? Nope.

Is it legalism? Nope.

Is it sacramentalism? Again, no.

The number one heresy is to believe only.

Faith alone is the number one error in salvation according to the 2014 edition of The Moody Handbook!

Let that sink in.

A Change in the Meaning of Repentance

There are two important doctrinal changes between the 1989 and the 2014 editions of The Moody Handbook.

Second, this kind of repentance is a condition for salvation along with faith. That implies that works are a condition of salvation, too, since repentance means doing good works.

The author unsuccessfully evades the charge of teaching salvation by works. For example, at first, the author recognizes that if repentance is a change of behavior, that may be adding works to salvation:

Some say salvation need not include repentance nor spiritual fruit in one’s life, for either one adds works to salvation… (The Moody Handbook, 2014, p. 344).

Later he writes that works are not a part of salvation:

…no works factor into the issue. It is correctly stated that salvation is by grace alone, through faith alone, for the glory of God alone (Ibid., p. 345).

That sounds good. But does he really believe it? It seems not. He goes on to imply that works are part of repentance, which is part of the condition for salvation:

It can readily be seen that repentance involves not only a change of mind, but a change of direction, remorse for sin, and as a result, a change of life (Ibid., p. 344, emphasis added).

William Mounce defines repentance (metanoeō) as “a radical, moral turn of the whole person from sin and to God” (Ibid).

Morally speaking, you were acting in sin. But repentance requires a radical moral turn from sin.

What other behavior changes are required?

“Such change of mind, and of the whole person, means true belief includes a transformed life—salvation includes transformation” (Ibid).

Do you see the contradiction?

At first, the author protested that his view did not make works a condition of salvation. But isn’t that exactly what his definition of repentance means?

Doesn’t a change of direction mean you will act differently?

Doesn’t a moral turn of the whole person from sin mean that you stop doing evil and start doing good?

Of course they do.

So what does that mean for how he understands the condition of salvation? Does he believe in faith alone, that is, in salvation by faith apart from works?

That is clearly what the 2014 edition teaches.

There’s no escaping the simple logic of it. The author is teaching a form of salvation by works. That represents a serious corruption of the purity of the gospel.

This radical change in The Moody Handbook is reflected in the authorship of the respective forewords.

In 1989, the foreword was written by J. Dwight Pentecost. And can you guess who wrote the foreword to the 2014 edition?

Readers of this magazine will certainly not be surprised at that.

Sadly, this change to The Moody Handbook represents a downgrading of the message of life. Instead of correctly distinguishing between faith and works, the 2014 edition makes doing good works part of the definition of repentance, and hence, a co-condition for salvation.

The Moody Handbook has changed its mind about salvation once. Let’s hope that, in a future edition, it repents of teaching works salvation and goes back to affirming that salvation is by faith alone, in Christ alone, apart from works.

Shawn Lazar is the Editor of Grace in Focus magazine. He is the pastor of Gateway Baptist’s Faith Fellowship in Denton, TX.