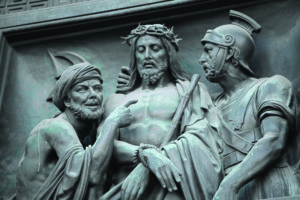 In particular, Peter’s mind is turned to the Psalms. Verse 20 combines two references from the Old Testament (Pss 69:25 and 109:8). The latter verse comes into Peter’s quotation exactly as it is in the Old Testament, but the quotation from Psalm 69 changes the plural reference of “their habitation” to “his habitation,” and the words “in their tents” become simply “in it.” The word epaulis (= “farm,” “homestead,” “residence”) is the LXX rendering of the Hebrew mirah ( = encampment, BDB p. 377b) which in a poetical sense refers to a habitation and is a poetic equivalent of epaulis.

Psalm 69:20-21 are clearly the pre-recorded words of our Lord, so verses 22-25 refer to His enemies. But if they refer to His enemies, then surely Judas, who guided them to Jesus (Acts 1:16), is included. Thus the Psalm rightly may be applied to him.

Psalm 109:1-5 prefigures the exercises of the Lord’s heart. Verse 4 virtually places us in the garden of Gethsemane as, with the adversaries on their way there and our Lord conscious of His love for sinful man, He gives Himself to prayer.

Note in Ps 109:4 that the word yismenuni (= “they are adversaries to me”) is a cognate of saman, meaning adversary or Satan (BDB p. 966 c). It is deeply appropriate to that garden scene, for Satan had entered into Judas. Verse 5 is especially true of Judas and so suddenly the singular begins to prevail from verses 6-8 and following. All of the enemies are now seen, so to speak, personified in Judas.

Perhaps Peter was thinking of Judas’s field and the Spirit led his mind to Ps 69:25. A fulfillment of this could be clearly seen in that desolate field which became a graveyard (cf. Matt 27:7). It followed from this that if such a prediction had to be fulfilled (edei plerothenai), then of course Ps 109:8 likewise had to be (dei, Acts 1:21). Thus the will of God was clear.

It would seem that Peter remembered these two verses as though they were but a single Scripture (tēn graphēn tautēn, Acts 1:16) as indeed on a spiritual plane, in reference to Judas, they are.

Moreover, he may not have been aware of his verbal variation from Ps 69:25. Peter remembered the Scriptures this way because in this way the Spirit desired them to be remembered. Thus we see the work of the Spirit in guiding us through the Word. He not only brings to remembrance (cf. John 14:26) but He interprets and guides into truth (cf. John 14:13). The passage from Ps 69:25 comes to Peter’s mind interpretatively; Ps 109:8 comes to his mind exactly; and both come to his mind connectively. Thus he remembers and understands at one instant.

So the Spirit of God is ever in our hearts as a reminder and an interpreter of God’s Word that we might know God’s will. But we must be acquainted with Scripture to benefit from such divine leading (Ps 119:11).

1:18-19. These verses are an explanatory parenthesis by Luke. The purchase of the field (ektēsato) may actually have been in Judas’s name. But whether or not this was so, that is what he “got” (ktaomai) with the blood money. The field seems to have been named both with a view to his bloody death and also because it was obtained with blood money (Matt 27:6-8). The priests, acting with the false scruples noted in Matt 27:6-7, may have regarded the money as belonging still to Judas, hence the field as his. Acts does not state that Judas’s death was in his field, but only that the field received its name from his death. Of course, Matt 27:5 may telescope events that were stretched out. Perhaps Judas lived to see the field become his and went there to commit suicide. The “falling headlong” probably refers to the rope breaking under the weight of his body.

Whereas such a field might have been a homestead (epaulis), its reputation guaranteed it not being so used. No Jew would want to be buried there. Only foreigners were interred in it. Thus the field was marked by desolation. The field became a picture of Judas’s life and death. Whereas that life might have been a fruitful “field” for God and the blessing of souls—whereas it might have furnished many with everlasting habitations—it actually came to speak only of a ruin in which no man desired to share in death.

Judas might have been in the upper room, awaiting the promised coming of the Spirit, instead he was in the lowest hell (“his own place,” ton topon ton idion v 25). The poreuthēnai expresses the longest moral journey downward in human history from the highest possible privilege—apostleship—to the greatest possible ignominy and woe. Better he had never been born.

As he had no pity or love—no bowels of kindness—in life toward the Lord (until too late), so God’s judgment is that he have no pity in death. His greatest sin was an unfeeling rejection of the Savior’s love (Ps 107:4-5). His kiss of betrayal was without compassion. 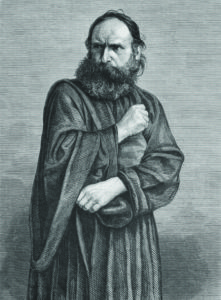 1:21-23. Acting on this insight from the Scriptures, men with the needed qualification for the Apostleship are now singled out. It must be noted here that the term martyra (v 22) is a virtual equivalent of “apostle.” Apparently only two men, out of the 120 people assembled, meet the stipulations.

1:24-25. The disciples—utterly deceived by Judas even to the point of trusting him with their money—do not here trust their knowledge of the human heart. They appeal to the Lord’s knowledge of the heart to make this choice. God alone can place men in His service, for He alone knows their heart (cf. 1 Tim 1:12).

2. To make a decision that must be made without delay. They knew not when the Spirit would come, soon no doubt (1:5), and then the period of witness would begin (1:8). A new witness was needed at once.

3. To make a decision in which the determining facts were beyond any possibility of human knowledge, i.e., knowledge of the heart.

It is probably best to view this situation as unique, especially since lots were used in Scripture to distinguish between persons in the assigning of roles, portions, duties, and offices. No method of determining God’s will is valid if it is a substitute for knowing God’s Word (cf. Ps 119:105 and 2 Tim 3:16-17). Here it arose out of knowledge of God’s Word and only ignorance of the human heart. But its Old Testament character should warn us against seeing a normative New Testament principle in the precise mode employed.

For Matthias it was a potentially great comfort to know, by this procedure, that he was an Apostle by divine choice, not by the human choice of the others (no election was held). So he shared with them their knowledge of divine appointment.