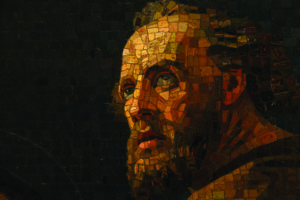 A Date for John’s Gospel before AD 70 Is Suggested by John 5:2

Within conservative Evangelical circles, John’s Gospel is commonly dated around 95-96 AD, with a few dating it three decades earlier.

A date before AD 70 is actually required because John 5:2 says, “Now a pool is by the Sheep Gate in Jerusalem (called Bethesda in Hebrew), having five colonnades.”

John says is, present tense, not was. If he had written after the siege of Jerusalem, he would have said that a pool had been there. Bethesda (a casualty of the siege of Jerusalem in AD 70) was uncovered in the late 1800s. Archaeologists identified it by its four surrounding colonnades and a fifth passing through the center, dividing its twin pools.

John 5:2 shows the book was written before AD 70. However, a sleeper verse in the Gospel, John 21:24, points to an even earlier date:

This is the disciple who testifies about these things and wrote them. Indeed, we know that his testimony is true.1

The book’s author, John, is clearly the referent of This in the first part of the verse and his in the second. Who are the we of the second sentence? If one surmised that John used an editorial we in 21:24b, he would be testifying of himself, a faux pas, in light of John 8:13.2 The we of verse 24b refers to people other than John himself.

Thus Jesus did many other signs in the presence of His disciples, which are not written in this book. But these signs are written so you may believe that Jesus is the Christ, the Son of God, and that by believing [this], you may by His name have life (emphasis added).

John focuses on signs seen by two or more disciples. This is true of all eight signs he records. On this basis, consider the possibility that we (John 21:24b) refers to the rest of the Eleven. When speaking about who will testify at the Great White Throne in John 5:31ff, Jesus says that He does not receive the testimony of man (5:33f), while recommending that ordinary people should receive the testimony of a man like John the Baptist:

You have sent to John, and he has testified to the truth. Now I receive no testimony from man, but I say these things so you may be saved.

Now, if Jesus can recommend the testimony of John the Baptist to others (cf. John 1:6-8), He certainly could do so with regard to testimony by the beloved Apostle (cf. 1 John 5:9f). The testimony of John the Apostle, his Gospel, is inspired Scripture, the very Word of God. Who would imagine that any of the Eleven would be unwilling to jointly testify that John’s Gospel-testimony is true? Certainly, no one would suggest that any of them would deny John’s testimony.

Instead, though, most conservative Evangelicals think John wrote his Gospel after the rest of the Apostles had died or were scattered across the face of the globe. They would say, “Of course, the rest of the Apostles would have welcomed John’s Gospel, but they never saw it.” But then whose endorsement of John’s Gospel-testimony appears in 21:24b? If we means John alone, then he testifies by himself—carrying no legal weight. If we means people other than the Eleven, what legal weight would that carry? The only human endorsement that fits would be that of those who could jointly testify with John, namely, the Eleven.

John himself reinforces this understanding of we in John 1:14:

And the Word became flesh and encamped among us, and we saw His glory, glory as of the unique One from the Father, full of grace and truth.

The word translated encamped could also be tabernacled (cf. Young’s Literal Translation), but unbelievers today reading the book would stumble over this archaic term. However, encamped suggests the incarnate Word dwelling temporarily as in a tent, after leaving heaven. He temporarily (as the Shekinah glory) made His presence known from the tabernacle in the Old Testament. The following clarifies the thought:

Now, the question is: Who exactly saw this glory of Jesus Christ, God’s Son? John 2:11 says,

This first of signs Jesus did [water to wine] in Cana of Galilee, and He displayed His glory. So His disciples believed in Him.

His signs displayed His glory. John 20:30f says John selected eight signs from among those which Jesus did in the presence of His disciples. He revealed His glory, especially to His disciples, as He did His many signs. As John 21:24b says: We know that his [John’s] testimony is true. The Apostles willingly testified jointly with John. First John also expresses this same truth.

This same understanding of the first person plural is found at the start of John’s first epistle:

Believers may wonder, “Why would God design only one book, John’s Gospel, specifically for unbelievers?” John 21:24 may be the answer. The rest of the Eleven said, in effect, “John wrote the final word on the topic; one such book is sufficient.” They received their message of life from Jesus Himself, just as John did. Similarly, Paul says that his message of life came directly from Jesus, not even through other Apostles (Gal 1:11f). John has recorded what Jesus wanted him to tell unbelievers; the Spirit did not need to inspire a second book aimed at that audience.

A reasonable corollary to the foregoing would be that John’s Gospel may well have been distributed to the areas where each of the Eleven (and Paul) ministered. A reader could say to Peter or another of the Eleven, “Could you explain this passage in John?” What better human endorsement could John’s Gospel have than the Eleven who accompanied Jesus and were appointed as Apostles by Him?

1. All Bible translations by the author.