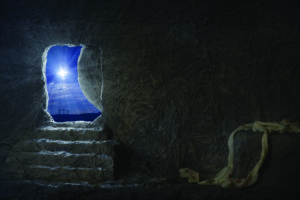 Believe it or not, there are rumblings against the idea that John’s Gospel is evangelistic. What does John 20:30-31 say?

Thus Jesus did many other signs in the presence of His disciples, which are not written in this book. But these signs have been written so you may believe that Jesus is the Christ, the Son of God, and that by believing this, you may have life by His name.2

There are three reasons why we know John’s Gospel is evangelistic:

2. Even a present tense in 20:31a would imply unbelieving readers.

3. John 20:31 stays true to the evangelistic purpose for Jesus doing each sign.

The critical text of the NT actually does support the aorist in John 20:31a. It prints pisteu[s]ēte with brackets around the s to signify that three out of five members of the editorial committee voted for the aorist form pisteusēte. The majority favored the aorist. John wrote “that you may believe…” That is, John wrote evangelistically to unbelievers.

But what if we were to pretend that believe in John 20:31a were a present tense? Would that favor believers as the intended audience of John’s Gospel? No.

Even a Present Tense in 20:31a Would Imply Unbelieving Readers

Most Greek teachers pound into their students the notion that present tense necessarily implies continuous action. Admittedly, it allows that sense, but does not require it. However, that is not the real issue here.

John certainly would want people (once they had believed) to continue believing until death or the Rapture (1 John 5:13). However, saying that the purpose clause in John 20:31a aims at unending faith would not say that the readers had already believed. The present-tense purpose clauses in John 15:16 illustrate:

Question 1: Which came first? (a) Jesus choosing the Eleven and appointing them? Or (b) them going forth, bearing a great harvest, and that harvest abiding? Clearly, (a) was first. He chose and appointed them so they would begin to (and continue to) go forth and bear a harvest, as well as so that the harvest would begin to (and continue to) abide.

Question 2: As Jesus spoke to the Eleven in the Last Discourse (John 13–17) had they gone out and borne a great harvest? Not at all. Pentecost (fifty-three days later) would mark the beginning of the ministry for which Jesus had chosen and appointed them.

A present tense expressing purposed action cannot be assumed to have already begun. Though an author/speaker may wish for a continuance of desired action into the indefinite future, one cannot assume (from this) that the intended action had already begun.

I analyzed every present subjunctive following a hina of purpose in John’s Gospel. The purposed action had not yet begun in 85% of the examples (35 of 41). Four uses (10%) were of already-begun actions; two (5%) were ambiguous.3

Even if John had used a present tense in 20:31a (he did not), a present tense would not have created any expectation of a believing readership. Eighty-five percent of the time John uses present tenses for purposed actions that have not-yet-begun. Hence, John 20:30-31 shows that the original readers were unbelievers.

In sum, John 20:31a uses an aorist, urging unbelieving readers to come to believe. But even if John had used a present, the intended readers were still unbelievers.

Now let’s relate John 20:31 to the rest of the book to validate the book’s readership.

John 20:31 Stays True to the Evangelistic Purpose for Jesus Doing Each Sign

John 20:31 reads, “But these signs have been written [perfect tense] so you may believe that Jesus is the Christ, the Son of God, and that by believing this, you may have life by His name.”

Note the rendering of the perfect tense at the start of the verse. “These signs have been written,” rather than the generic these signs are written that is common. As John nears the end of his Gospel, the perfect tense portrays him reflecting on each of the signs that he had recorded. We might conceive of John saying:

Now, let us ask a simple, but profound question: What was the purpose for which Jesus did each of these eight signs? Was it (a) so that unbelievers might come to believe in Him? Or was it (b) to prevent people (e.g., the Eleven) who had already believed from abandoning their faith? Of course, the purpose of each of the signs was to convince unbelievers.

Those who imagine that John wrote to prevent Christians from defecting from their faith treat John’s Gospel as revisionist history. Those who view the fourth Gospel as re-engineering the signs from eliciting faith to preventing faith-defection conceive of John saying something like the following:

Jesus did these signs to bring about faith, but my purpose in recording the signs is not evangelistic. Don’t think of the signs as Jesus did. I am recasting them in a way that Jesus did not intend. I include them to prevent you from defecting from what you have believed.4

John 20:31a uses an aorist tense in speaking to the original unbelieving readership. The goal was that those readers “may believe,” that is, that they come to believe.

Even if John had used a present tense, 85% of John’s uses of the present tense in purpose clauses concern a yet-to-begin action.

John did not recast the signs. Jesus used the eight signs evangelistically; so did John. To say otherwise imagines that John would have employed a free-andloose hermeneutic. No, he respected the Lord’s original intent in what He did and said.

Christendom has largely ignored evangelism. Don Richardson has lamented the great omission of the idea of an evangelistic Great Commission.5 What a tragedy it would be if the Holy Spirit did not inspire even one book with an evangelistic focus. Is evangelism merely an afterthought? Woe to us if we steal the one book God designed for unbelievers from them.

John Niemelä is President of Message of Life Ministries. www.mol316.com.

2. All Scripture translation, unless otherwise noted, is by the author.

5. The great omission comes from Don Richardson, Heaven Wins: Heaven, Hell and the Hope of Every Person (Ventura, CA: Regal from Gospel Light, 2013), 188. Although the Great Commission verses focus on progressive sanctification, they presume that the message of life goes forth. John’s Gospel emphasizes Jesus’ message of life. There is no omission.