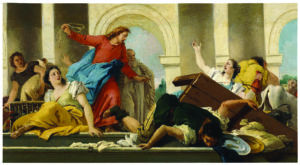 After centuries of promising to send a Messiah, God finally gave a concrete timeline in Daniel 9:24-27 for when He would come. And vv 25-26 give us specific information about what would happen to Messiah at that time:

“Know therefore and understand,
That from the going forth of the command
To restore and build Jerusalem
Until Messiah the Prince,
There shall be seven weeks and sixty-two weeks;
The street shall be built again, and the wall,
Even in troublesome times.
And after the sixty-two weeks
Messiah shall be cut off, but not for Himself;
And the people of the prince who is to come
Shall destroy the city and the sanctuary.
The end of it shall be with a flood,
And till the end of the war desolations are determined” (Daniel 9:25-26).

The Messiah would come 69 “weeks” (7 + 62) after the command to rebuild Jerusalem was given.

These are weeks of years, where every day in the week represents one year. That gives us a total of 483 years.

Alva J. McClain, following the work of Sir Robert Anderson, calculated that the timeline began with the command to rebuild Jerusalem as recorded in Neh 2:1-8. Interestingly, 483 years later would bring us to Jesus’ Triumphal Entry.

When Jesus entered Jerusalem, the people recognized the kingly act, shouting, “Hosanna to the Son of David” (Matt 21:9b).

And notice what would happen after Messiah came. According to Daniel, would the kingdom be restored to Israel at that time? No. Instead, after the end of the 69th week and before the beginning of the 70th, three terrible things would happen:

In sum, Messiah would arrive, be killed, and Jerusalem and the Temple would both be destroyed. Then the 70th week would begin sometime after those events.

Knowing Daniel’s prophecy gives new meaning to Jesus’ actions in the last week of His life. Instead of setting up the kingdom, Jesus acted in highly deliberate and symbolic ways that reflect Daniel’s prophecy. Consider the following examples from Matthew 21-24, and see how Jesus’ words and actions foreshadow either His death, the destruction of Jerusalem, or the destruction of the Temple, as predicted by Daniel:

Read Matthew 21-24 in light of Daniel 9:25-26. It will build your faith. What Jesus says and does during that last week takes on a whole new meaning in light of Daniel’s prophecy. You will see there are no accidents here—Jesus was perfectly fulfilling God’s plans. What an encouragement to students of prophecy!

Shawn Lazar lives in Denton, TX, with his wife Abby and their three children.