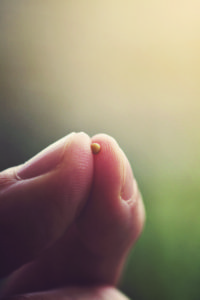 I was brought up in the Church of Christ since I was two weeks old.

I was a full-time paid preacher there for over twenty years.

If you are familiar with the Church of Christ, they can be a very legalistic bunch, and I was no exception.

I preached against all other churches and pretty much believed we were the only ones going to heaven. Of course, we believed that baptism was the point at which we got saved from our sins. And as I’m sure you’re probably aware, we also believed it was extremely easy to lose our salvation.

Now I am 65 years of age and have a completely different understanding.

I held fast to Church of Christ beliefs even though, on numerous occasions, God prodded me to go in a different direction. But I didn’t heed His voice.

There was a Baptist church across from mine. The pastor and I would go back and forth on the issues of baptism, faith, grace, etc. But I was unmovable.

Then one day our second car broke down and He gave me one of his cars—not a loan, but a gift.

I think he was trying to win me over and at the same time illustrate grace. I felt it, but didn’t interpret it as such at that time.

But a seed was planted.

Fast forward to several years later in my ministry. I was caught up in the sin of unfaithfulness and hence left preaching and lost my marriage at the same time. (A side note: Even though my first wife and I never got back together, she forgave me and now my first three children from that marriage are very close to me. She went to be with the Lord in her mid 50s.)

At that point I was a man without a church.

Probably the Church of Christ wouldn’t have accepted me back. And I didn’t feel comfortable going to a different church. So during those days I had a lot of private prayer time and introspection.

To make a long story short, I got involved in some relationships that went nowhere, and a friend suggested I go for Christian counseling since I had great difficulty in forgiving myself for my sinfulness.

That’s what I did.

The Christian counselor had well over 25 years of experience. I saw him weekly for 8 weeks. Often times, I knew what Scripture he was going to share before he shared it.

During that eighth week, toward the beginning of the session he said, “Don, I really admire your Bible knowledge.”

I mentally applauded myself.

Then he went on to say, “I think I’ve figured out how to solve your forgiveness problem.”

I remember pushing forward to the edge of my seat in order to not miss his next words.

“You do know I was a pastor for over twenty years?”

He replied, “I don’t care if you were the Pope for forty years, you don’t know the Lord.”

I thanked him and then immediately left. I was angry.

But again a seed was planted.

After I met my second wife, we started attending a Calvary Chapel. I felt comfortable there. I liked that they were going through the Word verse by verse.

One of the neat things about leaving a faith community like the Church of Christ, is that you begin to reassess everything you’ve ever been taught.

Of course, I knew at this point it wasn’t baptism that saves you, it’s Jesus. But I realized I hadn’t gone far enough.

One of the things that the Church of Christ has in common with Calvary and many other churches is the belief that one must “repent of sins” to be saved. So in that, I felt very comfortable with the crossover. But then I read the entire Gospel of John when I made an interesting discovery. Others had made it before me, but it was a first for me.

I knew that baptism didn’t save you and John certainly confirmed that. However, I noticed the absence of “repentance” in John.

I know why John wrote his Gospel because he tells us why in John 20:30-31. He wrote it so that unbelievers would “believe that Jesus is the Christ, the Son of God, and that believing [they] may have life in His name.” But if John wanted unbelievers to have eternal life, why wouldn’t he have mentioned “repentance”? Don’t you need to repent to have eternal life?

I targeted this concern in prayer.

I began studying other passages in other NT books that addressed repentance.

It occurred to me that every time I read the word, “repent,” or “repentance,” I always added “of sins.” But why? I realized then that it was because of church tradition.

It suddenly dawned on me that anything that takes away from praising Jesus for our salvation is a false gospel. It’s not multiple steps that secures our salvation. It is just one step—faith in Jesus. “He who believes in the Son has everlasting life” (John 3:36). We are not saved by faith plus repentance, or by faith plus anything else. It is all by faith.

I celebrated that new discovery with great joy.

Then I gathered my mental and spiritual forces to tackle assurance. The Lord kept hammering me with John 5:24.

“Most assuredly, I say to you,

he who hears My word and

believes in Him who sent Me

has everlasting life, and shall

not come into judgment, but

has passed from death into

I couldn’t shake that verse. You will “not face judgment, you have already passed from death to life.” That was amazing!

Jesus used past tense knowing full well that we would sin again tomorrow and the rest of our lives. Believers won’t come into judgment, even for future sins.

That verse became my banner and battle cry.

All of a sudden other passages began to fall into place. I realized that Jesus promised that believers are eternally secure. You can’t lose your salvation!

There is a lot more to that story but I spared you even greater details. Bless you if you made it to the end of it. My desire is to see people released from the sin burden they carry. Plus, I want them to give Jesus the proper glory that He deserves.

I pray that more folks will break free from their bondage and that the true gospel be preached.

It took me a long time to get it. But as I learned, you’re never too old when you keep your mind and heart open to the Lord’s leading.