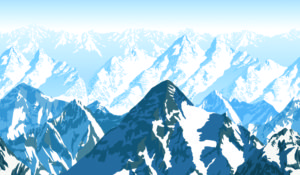 I love mountains. Given a choice between a mountain cabin, a beach resort, or an ocean cruise, I’ll take the cabin.

Sadly, Texas has few mountains. The highest is Guadalupe Peak at 8,749 ft. Guadalupe might be prominent here in Texas, but not compared to the rest of the world.

Mount McKinley (now called Denali) is the tallest in North America at 20,310 ft—more than double the height of Guadalupe.

But the tallest mountain in the world is Mount Everest at 29,035 ft. That’s over three times the height of Guadalupe Peak!

Guadalupe may be prominent in Texas, but Everest is preeminent in the world.

Do you know the difference between something being prominent and it being preeminent?

I have three little kids: Daphne, Zane, and Scout. Compared to other kids, they are prominent, they are important. They stand out from the circus because they’re my monkeys. I love them in a way I don’t love other kids and I have a responsibility to them that I don’t have to others.

When I take them to the playground, my eyes are chiefly on them. I keep an eye out for the other children, but my kids are the priority.

But among Daphne, Zane, and Scout, no one child is preeminent. I don’t have a favorite (at least, not consistently!). One is not worth more to me than the others. I love them all.

By contrast, I have one wife, Abby. She’s the one for me. There’s no other woman. We’re a one-flesh union until death. She is the preeminent woman in my life.

Do you see the difference?

What is preeminent in your life?

Your marriage? Your kids? Work? Career? Making money? Getting praise and applause from the world?

What do you think about most?

What is your Mount Everest?

Is He preeminent in your life, or merely prominent?

For many nominal Christians, and for many immature Christians, Jesus is just one part of a cultural identity. He’s a prominent figure, certainly. He’s important enough that you go to church on Sundays, say your prayers, and plan to be married by a minister. But you have other priorities, too. And sometimes those other things come first.

For nominal Christians, Jesus shares a prominent role with other important influences. In the competition for their attention, Jesus often loses to football games, concerts, political rallies, career moves, romances, or vacation.

Sometimes Jesus comes first, but only sometimes. He is prominent, but not preeminent.

By contrast, for Paul, Christ was preeminent:

Paul did not add Christ as another element to his life. Rather, Christ was his Life! Paul had a new life, Christ in Him:

I have been crucified with Christ; and it is no longer I who live, but Christ lives in me; and the life which I now live in the flesh I live by faith in the Son of God, who loved me and gave Himself up for me (Gal 2:20).

John saw it, too. Jesus was not just an important figure in life, but Life itself:

Is Jesus your life? Is He absolutely preeminent? Is He your Mount Everest?

If He is, it should radically change your perception of what it means to live the Christian life. Everything will center on Him, and Him alone. Here is how Jerry Benjamin described it:

All things are about Christ, focus on Christ, and for the glory of Christ (Simply Singular, p. 6).

Can that be said about you?

Is your life about Christ?

Is it focused on Christ?

Do you live it for the glory of Christ?

In other words, when you think of your life, is Jesus preeminent or merely prominent?

Shawn Lazar is the editor of Grace in Focus magazine. His latest book is Chosen to Serve: Why Divine Election Is to Service, Not to Eternal Life.