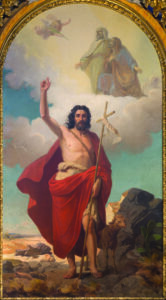 I really enjoyed Dan Wallace when I had him for Greek grammar. I thought he was one of the best teachers at my seminary. But presently I’m grieved that his Greek Grammar: Beyond the Basics has won the day in Evangelical schools and carries such great influence over preachers and teachers.

In writing about the substantival present participle (which is simply a present participle with the article and acts as a noun), he correctly points out that the aspect of the tense is diminished. Aspect means the progress, result, or simple occurrence of something.

All the grammars say this, including that the tense becomes gnomic (i.e., timeless). In other words, the substantival participle is not stating something is happening, just that it has happened.

Other grammars (e.g., Robertson) point out that the emphasis (via the article) is now placed on the noun it has become or the person the verb is modifying.

The Believer and the Baptist

For instance, concerning the present participles in John 3:16, the emphasis is not at all on the continual nature of belief, but gnomically, that this person has believed. Therefore, the emphasis now is on “what happens” to such a person: he or she will never “perish, but has eternal life.”

Thus, the participle functions as a noun: the one who believes could be translated the believer.

See, for example, John the Baptist.

This verse illustrates the point well since John was already dead, having been beheaded by Herod. He was not baptizing anyone anymore. But he was still John the Baptist.

Thus, for example, in Matt 5:28, “everyone who looks at a woman (pas ho blepōn…)…does not mean “continually looking” or “habitually looking” any more than four verses later “everyone who divorces his wife” (pas ho apolūōn…) means “repeatedly divorces”! (Greek Grammar, p. 616, emphasis added).

Thus, for example, ho baptizōn in Mark 1:4 does not mean one who “continually baptizes” but simply “the baptizer” (Greek Grammar, p. 620, emphasis added).

So far, Wallace is agreeing with all the Greek grammars, but then he says something odd, because it’s so contradictory to his point later,

Secondly, many substantival participles in the NT are used in generic utterances…As such it is expected to involve a gnomic idea. [ed. gnomic= a timeless fact. It does not say that something is happening, but that something does happen.] Most of these instances involve the present participle. But, if they are already gnomic, we would be hard-pressed to make something more out of them—such as a progressive idea” (Greek Grammar, pp. 615-16, emphasis added).

Shockingly, while he admits he’s “hard-pressed” to find the progressive/continuous idea, that’s just what he proceeds to do!

In an extreme case of special pleading, with no support at all, Wallace departs from what all grammars say and argues that the substantival participle of John 3:16 is a special category all to itself.

The idea seems to be both gnomic and continual: “everyone who continually believes.” This is not due to the present tense only, but to the use of the present participle of pisteuō, especially in soteriological texts of the NT (Greek Grammar, pp. 620-21, emphasis added).

I said above that Wallace has no support because, as is usual from fellows of this persuasion, they offer non-validated proof-texts, of which the briefest glance shows them to argue not for, but against their points (e.g., footnote 22, p. 621. I scratch my head at how such a brilliant guy can say these things).

John 3:16 and the Condition of Eternal Salvation

Earlier in his book, Wallace listed the present participle of pisteuō in John 3:16 as an example of what’s often called a “continual present” (which Wallace classifies as a “Customary [Habitual or General] Present,” Greek Grammar, p. 521).

In this Gospel there seems to be a qualitative distinction between the ongoing act of believing and the simple fact of believing (Greek Grammar, p. 522, emphasis added).

But no support is given at all for that statement. Rather, Wallace commits what Barr, Nida and others call the “tense fallacy.” On the contrary, any study of John shows just the opposite. There’s no argument for ongoing belief. Rather, emphasis is placed on the simple fact of belief. Among other arguments are these:

Here are just some of the aorists in John. All are interchangeable with the present tense:

This presentation was already complete before I read Bob Wilkin’s wonderful article, “Is Continuous Drinking Required for Eternal Life?” In it he states,

Let’s say ho pinōn (a present substantival participle) means, as Wallace suggests, “everyone who continuously drinks” (p. 621), and thus it takes continuous believing to be born again…When would a person fulfill that requirement? At a moment in time? Certainly not… After a day of continuous drinking? Nope. After a year? A decade? Five decades? No. If a person ever stopped drinking prior to death he would not fulfill the requirement of continuous drinking.

So, if what Wallace is saying is true, a person is not born again unless he continues in faith until death.

This leads to tough questions. How can you have assurance before death that you are born again? What if a believer were to go through a time of doubt? Is he unregenerate in Wallace’s understanding? What about a person who has a mental condition that causes him to stop (believing), like paranoid schizophrenia, OCD, or Alzheimer’s?… 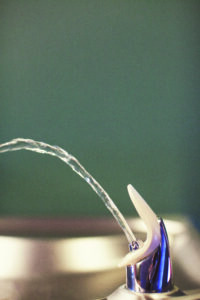 Scholars Can Be Biased

Wallace is a scholar. He’s also irenic, saying nice things about Zane Hodges in a blog upon his death. But he’s biased. Look no further than his cover endorsement of Wayne Grudem’s treatise against Free Grace: “This book is…rock solid in its penetrating insights regarding the Free Grace Movement.” Interesting, since so much of Grudem’s book is against the positions held by Dr. Chafer and the founders of the seminary at which Wallace teaches. It seems he’s more comfortable with John MacArthur, J.I. Packer, and Thomas Schreiner (fellow endorsers), who have little in common with Chafer, Ryrie, and Hodges, concerning the gospel.

Twisting Greek grammar, in this case, is tantamount to twisting the Scriptures. Wallace seeks to make the Scriptures fit with his theology—rather than vice versa. If one didn’t know he was so sincere, it would seem an obvious act of subterfuge.

Steve Elkins is associate pastor at Coppell Bible Fellowship. Before coming to CBF, Steve was on staff with Young Life Ministry for 25 years and was a pastor in Corsicana for 11 years.