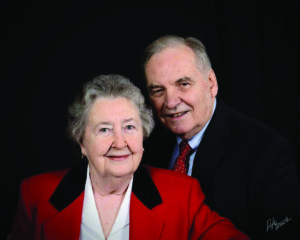 By Donnie Preslar with Bernie Hunsucker

Author’s note: Bernie Hunsucker and I are elders at Grace Bible Church in Charlotte, NC, where I am the senior pastor. We graduated from Florida Bible College together in the seventies and founded GBC. Both of us attended Dr. Geisler’s funeral service and took notes. I will incorporate some of Bernie’s notes into this article, but I won’t try to indicate which comments are mine and which are Bernie’s. This is a collaborative effort.

On July 1, 2019, Dr. Norman Geisler went to be home with the Lord. When he was a teenager, he believed in Jesus for everlasting life and spent the remainder of his long earthly life studying, teaching, and defending the Bible as the inerrant, inspired, and trustworthy Word of God.

Shortly after he came to faith in Christ, Dr. Geisler began to evangelize others with the good news. During one encounter, a drunk challenged him with a question for which Norman had no answer. That led to Norm’s enrollment at Detroit Bible College and his search for adequate answers to Bible questions, a pursuit which would characterize his life’s ministry. In June of 1955, he married Barbara Jean Cate; they had met at a Youth for Christ rally.

His earned degrees included a Th.B. from William Tyndale College, a B.A. and M.A. from Wheaton College, and a Ph.D. from Loyola University. He taught at Trinity Evangelical Divinity School and later taught systematic theology at Dallas Theological Seminary. Dr. Geisler served on the International Council of Biblical Inerrancy and became well known as an unwavering defender of the faith and a committed advocate of Biblical inerrancy.

In 1992, he and Dr. Ross Rhoads founded Southern Evangelical Seminary, and in 2007, he co-founded Veritas International University.

Dr. Ravi Zacharias gave the message at Dr. Geisler’s funeral. He reminded everyone that Norm’s middle name, Leo, means “lion.” Dr. Geisler lived up to his middle name. Bob Wilkin, who, like me, was a student of Dr. Geisler at DTS, remembers attending the 1998 annual meeting of the Evangelical Theological Society. Dr. Geisler delivered the presidential adddress that year. Present were about 2,000 Biblical scholars. His topic was “Beware of Philosophy.” Dr. Geisler pointed out that many of the younger NT and OT professors had bought into liberal philosophical views—they no longer studied the Bible objectively as the inerrant Word of God. Many in the audience took great umbrage at his remarks; he was bold and courageous to have addressed such a topic. That day, as on many days, Dr. Geisler roared, and he roared loudly.

Though he had at one time been president of ETS and had attended their meetings for over four decades, he later withdrew his membership when ETS did not expel Clark Pinnock for espousing open theism.

Dr. Geisler was well known for his high view of Scripture. He held firm to the belief that the Bible is in fact the very Word of God. He did not, like many others, view feelings and experiences as arbiters of truth. He once told an apologetics class that after we sing, “You ask me how I know He lives,” we should not sing, “He lives within my heart.” Instead, we should sing, “You ask me how I know He lives; the Bible tells me so.” He said that everyone has experiences. Mormons have their burning in the bosom. Buddhists have their feelings and experiences.

Dr. Geisler was adamant that truth is found in the Bible, not in our experiences. One is objective; the other is subjective. Rely on the objective.

Dr. Geisler was a noble ambassador for Christ. He was known to freely and cheerfully help others financially. He and his wife Barbara had the gift of hospitality and opened their home to visiting pastors, teachers, and missionaries. Dr. Geisler was a real mensch—what he taught as a professor, he lived as a father, a husband, and a man. At Norm’s funeral the Geisler children attested to how deeply he loved their mother Barbara, whose sacrifices made it possible for Norm to do what he did, and the high priority he placed on love for his family. Dr. Geisler emphasized by the way he lived the importance of the local church and was an active member of the church they attended. The world knew Norm Geisler as a great intellect, a great writer, and a great defender of the faith. His children knew him first and most importantly as a great dad who loved them.

As mentioned above, Dr. Ravi Zacharias delivered the message at Dr. Geisler’s funeral; this was Dr. Geisler’s personal request. Ravi had been a student of Dr. Geisler and later became his friend. Ravi was in Asia when he heard about Dr. Geisler’s passing and put forth a Herculean effort to make it back to the States in time to speak at the funeral which began at 3 pm. Ravi arrived at 2:55 pm!

He told the audience there that he learned two very important truths from Dr. Geisler: 1) our cause is greater than ourselves, and 2) our goal is never to vanquish an opponent but to lead him to Christ. Dr. Zacharias pointed out that Dr. Geisler gave dignity to reason and faith; he was God’s bulldog for Biblical inerrancy and had the heart of an evangelist. Norm was a master teacher who loved his craft.

Norman Geisler lived out 2 Timothy 4, the Apostle Paul’s valediction to Timothy. Dr. Geisler preached the Word; he was ready in season and out. He convinced, rebuked, and exhorted. He fought the good fight, finished the race well, and kept the faith. As a giant of a warrior, a cheerful and dutiful one in the battle for ideas, he used the Sword of the Lord in an effort to win his adversaries to Christ, not to trounce them. The legacy he leaves behind includes his family, his students, his writings (he wrote or co-wrote 100 books), and the countless lives he touched and improved through his faithful ministry. His life and ministry are summed up in Phil 1:17, “…I am appointed for the defense of the gospel.”