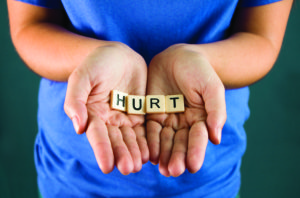 We’ve all been mistreated by acquaintances, business people, and strangers. It is often inadvertent—an automobile accident or a good faith business venture gone wrong. Sometimes the wound is intentional—a merchant defrauds us, or a stranger commits a crime against us.

Though they have hurt us, these people are still “out there.” It is those who are close, to whom we have entrusted our hearts, who devastate us by betrayal. It’s hard to imagine any pain worse than having a child killed by a drunk driver. But ask the grieving mother whose daughter has renounced Jesus and has descended into moral chaos or ask the desperate father whose son’s rebellion threatens to destroy the family. They may say it would be better had the child died.

One father whose life has been ruined by betrayal expressed his anguish in Psalm 3:

A Psalm of David, when he fled from Absalom his son.
Lord, how they have increased who trouble me!
Many are they who rise up against me.
Many are they who say of me, “There is no help for him in God.” Selah.
But You, O Lord, are a shield for me,
My glory and the One who lifts up my head.
I cried to the Lord with my voice,
And He heard me from His holy hill. Selah
I lay down and slept;
I awoke, for the Lord sustained me.
I will not be afraid of ten thousands of people
Who have set themselves against me all around.
Arise, O Lord;
Save me, O my God!
For You have struck all my enemies on the cheekbone;
You have broken the teeth of the ungodly.
Salvation belongs to the Lord.
Your blessing is upon Your people. Selah.

David’s naked emotional display of righteous anger confronts us with a miserable truth.

Those who are close can hurt us the most

The superscription reminds us of a sordid tale of lust, murder, and intrigue.

David would not forgive Absalom, and that destroyed the father-son relationship.

Absalom nursed his bitterness and years later he mounted a palace coup to seize power and kill David.

How dreadful to realize that loved ones may become bitter enemies who turn others against us.

News of Absalom’s rebellion was followed by more bad news. No sooner had he learned of Absalom’s treason than “a messenger came to David, saying, ‘The hearts of the men of Israel have gone after Absalom’” (2 Sam 15:13). Thus, David cried, “How many are my foes! Many are rising against me.” What was that like for David? His own son became a bitter enemy and turned others against him.

Go to God when you have been betrayed

David’s response shows us how to respond when this happens to us: go to God when you have been betrayed. When he sought the Lord, David found comfort when he remembered God’s past faithfulness and the promise of answered prayer.

David called the Lord “my shield” (v 3). Surely, he remembered God delivering from enemies like Goliath, the many enemies he battled in hand-to-hand combat, and even from the hand of Saul. David was comforted by remembering God. “He protected me before. He can do it again!”

He referred to God as “my glory.” He must have recalled how the Lord had exalted a humble shepherd, the youngest son of a poor family, to become the anointed king. God promised his kingdom would last forever. David was comforted with the certainty that “what God has given no man can take.”

His spirits were lifted by the “One who lifts my head.” Can you see David lift his chin toward heaven, stand up straight, and step out in confidence? Painful betrayal was put in proper perspective. David could rightly shout, “I cried aloud to the Lord and he answered me” (v 4). David’s prayer was bold. It was audacious. It throbbed with joy because he had gone to God in pain and left in confidence.

This explains v 5’s remarkable shift in fortune. After fleeing for his life, David enjoys a good night’s sleep because the Lord “sustained” him. David’s troubles didn’t evaporate; God provided support that kept despair from overwhelming him. David rose to face the day, certain of his deliverance “I will not be afraid” (v 6), and certain that God would silence his foes (v 7). Therefore, he could shout “salvation belongs to the Lord” (v 8)!

Because David went to God with his anguish and spoke honestly about his suffering, he found comfort in remembering God’s faithfulness and promises, and gained confidence to face the challenge before him.

The danger of betrayal is inherent in the nature of love. When we love others, we lower our defenses. We allow them in past emotional barriers designed to protect our frail hearts. We trust them with our most vulnerable selves. When you are betrayed, you face a difficult and painful choice: either deal with the pain of betrayal and learn to trust once again or condemn yourself to a life of loneliness and hopeless anguish.

What will you do when it happens to you? Will you nurse your anger? Will you stoke your appetite for revenge? Will you surrender your soul to bitter anger against the one who betrayed you—remaining their victim forever?

Psalm 3 is a note of hope for those who have been betrayed by family or friends. God gives comfort and courage to face the pain of betrayal when we turn to Him in prayer.