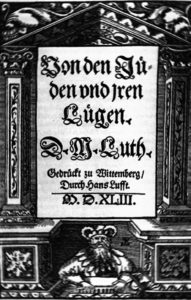 The contempt for Israel and its institutions evident in early Christian writings such as the pseudonymous Epistle of Barnabas gradually turned to hate when it became clear that the Jewish people, theoretically disinherited by God, had not vanished from the scene. Two examples will suffice to show just how “anti” Jewish the Christian Church became.

The first of these examples was the preaching of John Chrysostom around Easter of 387. At the beginning of his sixth antiJewish sermon, he stated that since God hates the Jewish people, Christians are also duty bound to hate them. Had the Church followed the example of the Apostles, instead of hating the Jews, she would have considered evangelizing them one of its top priorities (Rom 1:16).

The second example is Martin Luther’s work, The Jews and their Lies (1543). Luther’s vehemence against the Jews in this writing is incredible. As well as reinstating all the Medieval myths concerning presumed crimes committed by Jews, Luther incites his readers to engage in numerous anti-Jewish activities, everything short of cold-blooded murder. Because of Luther’s earlier role of reasserting the truth of the gospel of grace through faith in Jesus Christ, the radical anti-Judaism contained in this writing was very influential right up till the time of Adolf Hitler. Is it any wonder that the chief rabbi of France, Gilles Bernheim, considers the mention of Jesus as Messiah the greatest obstacle to dialogue between the Church and Israel?

The Loss of the Hebrew Worldview

Replacement Theology also produced many negative effects in the Christian Church itself. The first of these was the way the Church began reading the Old Testament Scriptures. Echoing what happened in the second century, one Sunday School teacher in recent times put it like this: “When you read ‘Israel’ in the Old Testament you need to understand it to mean the Church.” By allegorizing Israel’s Holy Scriptures, the Church not only eliminated Israel as a subject of theological reflection, she also lost the Hebrew pattern of thought. Consequently important Christian doctrines were formulated in a Greek philosophical framework.

A Hierarchical and Priestly Church

Has it ever occurred to you to compare the terms used in the New Testament to describe church leaders with the following terms used by Roman Catholicism: “priests,” “bishops,” “archbishops,” “cardinals,” and “pope”? Why ever would a church want to call its leaders “priests” rather than “elders” and attribute to their leaders a mediatory rather than a pastoral role? (cf. 1 Tim 3; Rom 12; 1 Cor 12; Eph 4; 1 Pet 1:22-23; 2:4-5; 4:10-11; 5:1-4). What is even more surprising is that one of the main tasks of Roman Catholic priests is to offer sacrifices! A casual reading of the New Testament is enough to know that Christ’s death and resurrection put an end to all sacrifices and that everyone who has received new life in Christ is part of a “holy priesthood” and has received at least one spiritual gift enabling them to contribute to Christian ministry (Heb 10:1-25; 1 Pet 2:510; 4:10-11). So why this dramatic and lasting change in many Christian Confessions?

The answer lies in the new self-understanding of the post-apostolic church as being “the true Israelitic race,” an expression used by Justin Martyr (Dialogue with Trypho, CXXXV). As I read the writings of the so-called “Apostolic Fathers” I discovered that their claim that the Church is the new, true Israel, is closely linked with the way they read the Old Testament writings, as though written to and for the Church. Thus the book of Leviticus, which describes the duties of the Levitical priesthood, was taken as instruction for Christian “priests.” To give an example, instead of taking the bread and wine in memory of Christ and of his once-forall sacrifice, as Christ himself instructed (Lk 22:19-20; 1 Co 11:23-26), these writers began to talk about Christian “priests” offering sacrifices which, they claimed, were better than those offered by the Levitical priests (Dialogue, CXVICXVII). Thus the categories of ministry which pertained to Aaron and his sons were used increasingly to define Christian ministry.1

What is most serious in this operation is that the specific kind of ministry associated with the New Covenant instituted by Christ was increasingly neglected, in particular the preaching of the gospel of grace, in view of producing faith unto salvation in the hearers. Instead of the ministry of the New Covenant empowered by the Holy Spirit, of which the goal is the new birth and reconciliation with God (see 2 Cor. 3:5–5:21), the majority of church leaders from the second century on considered themselves to be a priestly cast coming between God and the congregation.

One typical fruit of these developments was the concept of the Eucharist, a word which means “giving of thanks.” Beginning with Justin Martyr the “Eucharist” began to be thought of as a sacrifice (Dialogue, CXVII), the value of which, according to Irenaeus, depended on invocation of the Holy Spirit by ordained priests.2 As Thomas Lindsay observes, this priestly development was so radical that it can only be compared with the radical nature of the Reformation, only that the second century development was a negative one.3

The final link in the chain, which transformed the Christian Church into a Hierarchical body, was Cyprian and his polemical writing, The Unity of the Church. Whereas the apostle Paul taught that the factor unifying Christians, and therefore the principle for receiving each other into fellowship, is their common faith in Christ (Rom 15:7), Cyprian taught that the unifying factor is the legitimate successor of Peter, whom he identified in a certain Roman bishop. According to Cyprian, “sacraments” administered by local priests whose ordination cannot be traced to this bishop were null and void.

It is no accident that Cyprian is the most quoted Church father in the chapter on Church doctrine entitled “Lumen Gentium” in the documents of the Vatican II Council. But all readers of the New Testament know that no man has the power to deny another the benefits of Christ’s unique and final atoning sacrifice, because these benefits are received by faith (Rom 10:9-13; 1 John 2:1-2; 4:8-10).

We have seen three ways in which Replacement Theology influenced Christian thought and practice. First, it pitted the Church against the very people from whom her own spiritual blessings derived (cf. Rom 15:27). Second, by imagining herself to be true Israel, the Church, in order to retain the Holy Scriptures which predated the birth of Christ, had to allegorize much of their content and thus lose their true meaning. Third, taking the “Old Testament” as being written for the Church, led to the neglect of vital New Covenant gospel truth in favor of reinstating a mediating priesthood as the norm for Christian ministry. Replacement Theology had led the Church a long way from apostolic teaching!