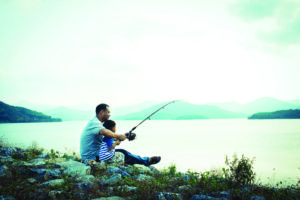 This morning I put in a few hours of activity which should earn me some points in the father-of-the-year contest: I drove my son and some of his classmates on a school field trip to go fishing.

Fishing with over twenty fourth graders is not really fishing: It is baiting hooks, helping them cast, pulling snagged lines out of bushes and trees (thankfully, none got snagged in students!), and starting all over again. It’s something of an exercise in futility.

The fish weren’t biting, but thankfully, the crawfish went for bacon, which made for happy kids.

I’ve been thinking of another type of fishing this week, what Jesus called fishing for men (Matt 4:19).

I recently was blessed by Adam’s Road, a ministry entirely made up of redeemed ex-Mormons, who shared their testimonies and music at our church. In the lead-up to their coming, I read Unveiling Grace, written by Lynn Wilder (mother of two of the Adam’s Road band members), telling the story of how she and her family found their way out of the Mormon cult.1 After listening to the testimonies of the band members, and reading the book, some thoughts on how we ‘fish for men’ have surfaced in my thinking.

First, unless our witness for Jesus Christ is motivated by love and gratitude for what we have freely received by grace, our impact will be blunted. We may have the truth, but we will not have the “heart” that makes that truth attractive. It is possible to accurately expose the errors of Mormonism, but do so in a way which only hardens the resolve of those who are blinded by the teachings of that religion to hold to their beliefs. Expressing the love of Christ, who saved us, not because of anything we did, but by His mercy (Titus 3:3-6), is attractive!

Second, we must never water down the truth of the gospel in order to gain a response. The saving transaction, which is always and only by grace through faith alone in Jesus Christ alone, is too often replaced by some nebulous words about “having a relationship with Christ” and an invitation to repeat a prayer, or raise a hand. Justification is “caught” when a person is persuaded of the truth of the gospel. Whatever other experiences or feelings they may have, they come to the point where they say, “It’s true!” They don’t understand all the nuances of the doctrine of salvation (who does?!), but they recognize in Jesus the answer to their sin problem, and they believe in Him.

Third, we must never complicate, or add to, the simple gospel message. Are there a thousand things God wants to cleanse, change, improve, and utilize in each of our lives? Yes! Life with Christ is a process of progressively submitting to His truth, as it exposes areas of our lives where we are taking a wrong path. But listen: Those things are not the gospel of God’s grace.

The good news is that the way to eternal life and a forever relationship with God is available to every person, by believing in Jesus. Period. Mormons add their reams of rules and works in order for a person to reach exaltation. It’s all of men. Other cults do the same. Sadly, many Christians inadvertently fall into the same trap.

Keep the gospel clear: Believe on the Lord Jesus and you will be saved (Acts 16:31).

“OK,” you say. “I got the message: Love those you want to reach, don’t water down the truth, and don’t complicate it. Great! But…how can we get folks to see the truth, and respond to it?”

The reason most fourth graders (especially all together on a field trip) don’t catch many fish is that they have no patience. They throw in the line, and—if it doesn’t get caught on the nearest tree or bush—start reeling it in immediately. “I threw it in twice, and didn’t catch anything!” What they don’t realize is that unless you’re at a fish farm and it’s feeding time, you don’t usually throw in the line and pull out a fish immediately. (Here I must scold those TV fishing shows which edit out the hours of sitting and waiting, giving the impression the fish are just waiting below the surface to grab your bait.) In fact, a fish would have to chase after their bait if it wanted to be caught.

What must you do if you want to catch a fish? Be patient, and let the worm do its thing.

As it moves, ever-so-slightly, on the hook, it attracts the attention of passing fish. At first glance, they might be suspicious. But after two or three passes, their pea-brains start to think, “Hey, that looks like food!” And you’ve got your fish.

How You Fit In

How does this apply to fishing for men?

Well, remember how you fit into this little metaphor.

The Lord is the real “fisherman”—seeking to save those who are lost.

The “fishing line” in my thinking is Jesus, who has brought a way for mankind to escape the depths of sin and death.

And what am I? I am the worm. My job is to “hang in there and wiggle”—so fish will be attracted
to the truth of the gospel and “take the bait.”

Don’t press the metaphor too far—but let it reflect the truth of Scripture, where we read,

Sanctify Christ as Lord in your hearts, always being ready to make a defense to everyone who asks you to give an account for the hope that is in you, yet with gentleness and reverence (1 Pet 3:15).

Let God fill your heart with love for those who don’t know Christ as Savior, and then “hang in there and wiggle.” And when a “fish” floats by, and sees the joyful “wiggle” in your life, and asks you for a reason, give ‘em a taste of truth.

1. The term “cult” is avoided by some today, since it carries such pejorative connotations. But the doctrine of Mormonism (The Church of Jesus Christ of Latter Day Saints, or LDS) is both so insidious, so bizarre, and so targeted at Christians (who are weak and uninformed), that the term is both fitting and needed.