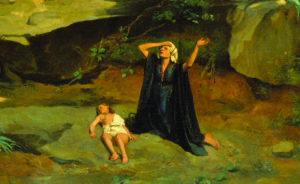 Christians don’t usually think of Hagar as a Bible person to emulate. Rather than submit to Sarai, she became antagonistic and ran away like a rebellious teen—a pregnant one. Yes, she brought some of her suffering on herself, but consider that she had been exiled from her people and her homeland of Egypt.

She was not a Hebrew, and thus had no status.

As a maidservant, her owners used her.

That was her life.

But she had obviously become a believer in the God of Abram, and she has a place in God’s Holy Word. So much so, that her life story can be an example for us.

First, it must be noted that God had promised Abram a son, but God never said Sarai would be the son’s mother until Ishmael was thirteen years old (Gen 17:25). God’s plans were not thwarted by Ishmael’s birth. In fact, God’s promise to Hagar to multiply Ishmael’s descendants so they cannot be counted parallels His blessing to Abraham. Both would beget twelve leaders and become a great nation (cf. Gen 16:10; 17:20; 21:18; 25:16). Thus, Abraham’s descendants through both Ishmael and Isaac exist today.

Second, Sarai gave Hagar to Abram as his wife (Gen 16:3). This may have been bigamy, but it was not adultery. (Later, God used maidservants to produce four of the twelve tribes of Israel.)

Third, God did special things for Hagar. Both times in the wilderness (Genesis 16 and 21) God conversed with her. In fact, Hagar is the first Bible person God favored with His appearance as “The Angel of the Lord” (Gen 16:7). He told her what to do about her problems with Sarai. Amazingly, He sent her back to the place of conflict and told her to submit1 to the source of her suffering. No rescue for Hagar—what kind of solution was that?

Like Hagar, we often try to run away from our problems. We trust in God to fix them, but His solution for us may similarly be “return and submit” to your pain (Gen 16:9). Like Hagar, we can do this because of God’s promises. What were they?2

1. Her son Ishmael would be like a wild donkey. Donkeys were valued animals—the Dodge Ram trucks of that day—but a wild donkey implies a free-roaming or nomadic existence. God told Hagar that Ishmael would live free and independent, not be a slave like herself.

2. Ishmael would have a powerful hand. He would be strong and prevail, meaning he would not run away from conflict like she did.

3. And Ishmael would have a place of his own in the presence3 of his brethren, not be exiled from his family like Hagar was.

These promises for her son were so wonderful, Hagar did something no one else in all of Scripture had the privilege of doing—she gave God a new name.4 He is the “God who sees.” Her son’s name will remind her that “God hears.” Hagar’s wilderness experience gave her new insights about God. She is not abandoned—God sees and hears. Rather than eliminating her suffering, He gave her something to help her endure it—Himself. With this assurance, she returned to Abram and Sarai.

Calculating from ages given in Genesis 16 and 21, Hagar lived in her undesirable situation for about seventeen years before God allowed her to leave (Genesis 21). Then she found herself in the wilderness again, dying of thirst. But God heard the cry of the son whose name means “God Who hears,” and the “God Who sees” opened Hagar’s eyes to see a well. (Abraham and his descendants had to dig their own wells, but God provided one for Hagar and Ishmael.)

Hagar’s Legacy to Us

When you suffer, do you also want to run away? Do you plead for the thorn’s removal or at least ask God to show you reasons?

Every [be]wilderness is an opportunity to see God in a new way and learn things you did not know before.

With this perspective of Hagar, we can also see Ishmael in a new light. Another “first” in Genesis is found in 21:20, “God was with the lad.” Later, this phrase about God’s presence is given in the book for Abraham, Isaac, Jacob, and Joseph, but Ishmael was first. Is God’s presence enough for us, especially when we suffer? After we believe the promise of eternal life, the best promise in Scripture is that God is with us. Not only does He see and hear, but He never leaves or forsakes us.

We may not get a remedy, but we are not without resources. We have God’s presence. He sees our needs and hears our pleas. When we remember this, we can respond like Hagar—surrender to God and submit to suffering if that is what God wants.

Marcia Hornok is the managing editor of CHERA Fellowship, a quarterly print magazine for people who have been widowed. She is the wife of a retired minister and mother of six.

4. Others assigned a name to the place where they encountered God, but Hagar assigned a new name to God.