Conventional wisdom claims that clear presentations of Jesus’ message of life ceased soon after the last apostle died. The following assertion by David Anderson is typical of that claim:

[W]e have no written record of anyone from AD 100 to AD 1500 teaching forgiveness of post-baptismal sins once and for all at the point of faith in Christ.2

That statement muddies the waters (pardon the pun) by raising the issue of baptism. Put more precisely:

Before refuting the assertion, consider what Paul says in Rom 10:8:

But what does it (the righteousness which is by faith) say? “The word is near you, in your mouth and in your heart [Deut 30:14]”—that is the word of faith which we preach [e.g., our preached message for you to believe].3

Paul did not excuse Israel because of the poor quality of rabbinic preaching or writing. Israel was accountable because God’s Word was near them. One tangible way that it was near them is that portions of the Old Testament were read in every synagogue service—even if the homily that followed did not do justice to the text for the day. The standard has always been God’s Word, not human writings in Christian bookstores nor Sunday sermons. 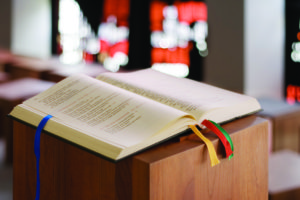 After the close of the New Testament canon (i.e., after the last book was written) most people assume that the message of life ceased being proclaimed. It is as if God’s hands were tied until Gutenberg (the printing press) and Luther (the ninety-five theses) came along. Certainly not!

Rather, the New Testament itself was copied extensively (5,000+ Greek manuscripts and 8,000+ Latin ones survive). That is only a minute fraction of those which were produced. Someone might object, “Literacy rates were low, books were expensive, and few knew Greek or Latin.” All these are true statements, but God’s Word went forth unhindered.

How so? A special class of manuscripts existed, called lectionaries. These were designed to make the Bible available in oral form to congregations. For example, on the first Sunday in January, congregations would hear a reading from a certain Old Testament passage, from the Gospels, and from the New Testament epistles. Each lectionary contained selections for each service throughout the year. The advantage of such manuscripts was that the reader had no difficulty finding the three passages for a particular service.

Paul urged Timothy, “Until I come, attend to reading, to exhortation, to teaching” (1 Tim 4:13). Revelation 1:3 blesses both reader and hearers, “Blessed be the one who reads and those who both hear the words of the prophecy and keep those things written in it, for the time is near.” The practice continued after the close of the New Testament. Justin Martyr (Apology 1:16) wrote of sections from the apostles or prophets being read during church services.

Interestingly, scholarly studies of Greek lectionaries show that 93% of the Gospel of John was read in church services over the course of a year.5 Lectionaries in other languages also gave prominence to John’s Gospel. The Word went forth. Romans 10:8 reminded Israel that the truth that undergirded Paul’s gospel was near to them.

Elijah complained, “The children of Israel…have killed Your prophets with the sword. I alone am left” (1 Kings 19:14, NKJV). The LORD corrected him, “Yet I have reserved seven thousand in Israel, all whose knees have not bowed to Baal, and every mouth that has not kissed him” (19:18). We must guard against an Elijah-complex in reflecting on the pre-Reformation era.

In every generation there were untold thousands of born-again people (both Jews and Gentiles) who shared their faith with others and their witness was supported by the reading of Scripture each week in church services.

Without hesitation, we affirm that the faith-alone in Jesus Christ alone for everlasting life message of the New Testament has always gone forth unhindered.6

6. In eternity we should expect to meet Christians who lived during the time between the close of the New Testament and the Reformation. God’s Word never returns to Him void. Promises like John

6:47 (“Whoever believes in Me has everlasting life”) were proclaimed far and wide as lectionaries were read publicly. Certainly, in all generations some have taken Jesus at His word and have shared their faith with others. Why do we lack written record of such people at that time who simply believed Jesus for His absolute promise of everlasting life?

It is victors (not losers) who write history books (an idea often attributed to Winston Churchill). Perseverance theologians were the (temporal) victors of the pre-Reformation era (and even afterwards). Books favoring grace and eternal security would often have found their way into bonfires. We may not often hear of mass book-burnings today, but those writing the history books about modern Christendom do not even seem to know that grace-people even exist. Or, they make snide remarks, dismissing such a notion as easy-believism.

Imagine someone five-hundred years from now (if the Lord tarries), asking, “Did anyone in the twenty-first century believe in absolute eternal-security?” It would not surprise me, if such a writer concluded, “We have no written evidence of anyone in the twenty-first century believing this truth.” My hope, though, would be that the author would add, “Bibles were everywhere in that era. Certainly, God’s Word did not return void. There must have been people in that century who simply believed Jesus’ promise.”