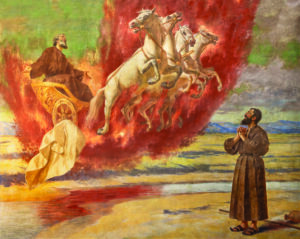 When our children were young, we had fun singing “I Wonder How it Felt,” a song that imagines what Jonah, Paul, David, Daniel, and Miriam might have experienced before God rescued them.1

As a spoof, I made up words for less-comfortable Bible events:

Yes, Biblical accounts contain some intense, dramatic moments. Besides loved ones brought back from the dead and angels suddenly appearing—or worse yet, wrestling you all night—imagine how these experiences must have felt:

Your dad takes you on a hike and then ties you up and holds a knife at your throat to make you his sacrifice to God.

The ruler of Egypt threatens you severely and then sends all the guards out of the room while he sobs uncontrollably. He beckons you near and speaks in your own language, “I am Joseph, your brother.”2

What about God’s “special effects” at Mount Sinai, meant to put the “fear of God” into His people.

David and his warriors at Ziklag, exhausted from weeping over losing everyone they loved and everything they owned.3

Nathan points at you and declares, “You are the man.”

In one horrible day, “the greatest man in all the East” loses everything except his bitter wife and four messengers.

Elijah wins the contest against 450 bleeding prophets of Baal when his simple prayer brings fire from God to burn up even the rocks, water, and dirt.

Elisha witnesses the rapture of Elijah—so astonished he keeps saying, “My father, my father—the chariots and horsemen of Israel.”

The Aramean army has their eyes opened to realize they are captured by their enemy king, who is asking if he should kill them. “No, feed them,” Elisha replies.

Jonah realizes he didn’t drown but probably wishes he had.

In the NT, we can imagine how startled Zechariah was to be the one God spoke to after 400 years of divine silence.

The angel telling Mary, “The Lord is with you,” when God had never said that to a woman before. Pretty intense.

Mary of Magdala talking with the gardener, when He suddenly says her name and she realizes Jesus died but is not dead.4

The two Emmaus disciples getting a crash course in Christology from a Stranger and feeling their hearts burn with the thrill of it.

And then we have Peter. He hears the rooster. Jesus makes eye contact with him. He remembers that Jesus had warned or informed him that he would deny Him three times that evening. Peter runs away and weeps bitterly (Luke 22:61).

What Bible event stirs your emotions? Better yet, what have been your intense spiritual experiences? The amazing ecstasy that makes you shout, “Guess what God did!” Or the colossal failure that crushes you with overwhelming regret and remorse.

My brother-in-law, Pastor Dan Hornok said, “Did Peter remember what else Jesus had said? ‘Simon, Simon, Satan has asked to sift you like wheat, but I have prayed for you, Simon, that your faith may not fail, and when you have turned back, strengthen your brothers’” (Luke 22:31-32 NIV, emphasis added).

How often during hardships have you been encouraged by someone praying for you? In the fall, my husband and I suffered with the coronavirus. Before Ken felt sick, our entire family was infected at his 75th birthday party. They had mild cases, but Ken and I were down for a month. Friends and relatives told us they were praying. We took extra zinc, vitamins C and D, and everything else recommended to us.

One Saturday I was worried and depressed over how bad I felt. Our son Nathan brought an inhaler to me, and before he left, he said, “Stand up, Mom.” Wrapping me in a hug, he prayed into my ear. I was comforted.

A week later, when we were still not improving, I called a young friend in California. She had lived with us a few years ago, and I discerned she had the gift of faith. I said, “Jill, will you please pray for us over the phone?” She was glad to.

The next morning as we watched church on TV, Ken in the recliner and I on the sofa, he said, “I think I might have turned a corner.” I felt the same way. Sure enough, we improved every day after that. I’m convinced the main reason we completely recovered from COVID-19 was God’s people praying for us.

Consider your tough times and intense moments—both victories and failures. Recall what Jesus said to Peter and know we have that reality too, based on John 17:20 and Rom 8:34. Then put yourself into that children’s song I mentioned at the beginning: I wonder how it felt to know that Jesus prays for me? Doesn’t that give you goosebumps?

Marcia Hornok writes from Salt Lake City where her husband pastored Midvalley Bible Church for 39 years. For a free digital copy of Marcia’s illustrated book of 40 brief evangelistic analogies, which you can print and distribute, email her at marcia.hornok@gmail.com (also available in KJV).

1 Attributed to Gloria and Bill Gaither.

2 Someone has conjectured that he sent the Egyptians out of the room so he could show his brothers his circumcision to prove his identity.

4 Thinking of this occasion, C Austin Miles wrote the beloved hymn, “In the Garden,” not as a Christian’s experience with Jesus today, but as Mary’s experience nearly 2000 years ago.