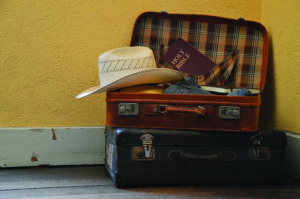 Three cities give us three different responses to the gospel.

First, Thessalonica is where Jewish opposition drove the apostolic witness not only from Thessalonica but from Berea as well (17:1-15).

Second, Athens is where Gentile pride in wisdom and indifference to the gospel, resulted in no maintenance of apostolic witness there.

And third, Corinth is where the Jewish opposition was frustrated, while Gentile interest was aroused by the gospel, and many people were aimed at the Lord.

Corinth (18:1-17) furnishes the climax of the lessons drawn from the second missionary journey. Here the sovereignty of God (with which the section began, 16:6-10) emerges prominently again.

18:1-3. After these things Paul departed from Athens and went to Corinth. And he found a certain Jew named Aquila. Virtually the first event at Corinth is Paul’s location of a Jewish couple, Aquila and Priscilla, who furnish him with both a lodging and a place to ply his trade. Though Paul did not know it at the time, this is a premonition of the comparatively lonely stay he will have in this city. And yet, lodging and maintenance are provided by a sovereign Lord.

God’s sovereignty is even further manifested in that Aquila and Priscilla only recently came from Rome. Thus, they are just in time for the Apostle himself to arrive.

Moreover, they were driven to move by a decree of Claudius (because Claudius had commanded all the Jews to depart from Rome), behind whom was a decree of the Kings of Kings who was providing for His gospel in Corinth (cf. the decree of Caesar Augustus at the birth of Christ).

18:4-8. Paul’s usual procedure of evangelization is followed—a procedure that, as a rule, often led to his expulsion from a city.

He evangelized in the synagogues and, after the arrival of Silas and Timothy, did so with unusual fervor (compelled by the Spirit). Once again we see the sovereign hand of God bringing the Apostle personal comfort through his companions in the work (Paul did not like to work alone, cf. 1 Thess 3:1, though he could). In connection with that comfort, the Lord compelled Paul to give an inward burden leading to solemn witness.

The Jewish reaction (they opposed him and blasphemed) is typical, and Paul separates from them with a solemn act (he shook his garments) and a solemn assertion hardly likely to arouse their good will (“Your blood be upon your own heads; I am clean”).

Here, under the circumstances of separation from the Jews—“from now on I will go to the Gentiles”—we surely find every reason for him to anticipate intense persecution (cf. vv 9-10 which imply he did).

The sequel to the separation (vv 7, 8) is also fraught with danger. He occupied a house right next door to the synagogue! No less a person than the ruler of the synagogue defected to Christianity and many of the Corinthians were believing and being baptized (imperfect tenses).

Also note the mention of baptism here, an act implying Gentile proselytism, well calculated to arouse Jewish hostility. Based on all past experiences, an anticipated Jewish uprising was fully to be expected.

18:9-11. Now the Lord spoke to Paul in the night by a vision. The sovereign Lord encouraged His servant to continue witnessing in view of His gracious purposes in Corinth.

18:12-17. Paul’s faith was tested, and God’s faithfulness was proved. God had promised no harm, but He did not promise no danger. However, as Paul is about to open his mouth (but not even that much effort is required), the mouth of Gallio becomes the instrument of God’s deliverance. The charge (“This fellow persuades men to worship God contrary to the law”) was one which might well have been effective under Roman law, but Gallio’s judgment is that Christianity and Judaism are not legally distinguishable. This judgment (given in full by Luke) may have set the tone for Roman tolerance toward Christianity under Claudius (cf. Bruce, Acts, p. 375-76). Gallio was no less than a proconsul in rank and had prestigious family connections at Rome.

Thus, again, the sovereignty of God over the affairs of earth—the supremacy of an exalted Lord—is vindicated. The Lord’s people in Corinth are called to Himself. But more (for He does more than we ask or think), a significant legal decision affecting the spread of the gospel throughout the empire was handed down. When the Risen Lord so wishes He can bend a Caesar’s decree (v 3) and a proconsul’s pronouncement (vv 14-15) to His sovereign purposes in grace.

At this point the focus of the inspired narrative is distinctly upon Ephesus. Luke only in the most hurried fashion is concerned at all with other places (cf. vv 22-23). And this is only to show how Paul gets back to Ephesus.

Here, while Paul obviously is not unwilling to impart the gospel (he preaches on at least one sabbath day), yet at present his heart is toward Jerusalem. A Jewish vow is in the background (“He had his hair cut off at Cenchrea, for he had taken a vow”), while a Jewish feast in the foreground (“I must by all means keep this coming feast in Jerusalem”). His heart cannot rest at Ephesus now, so he goes on. Thus the Lord overruled again. This becomes the keynote of his attitude toward Asia.

The vow and the desire for the feast anticipate Paul’s attachment to Jerusalem and its ancient customs, attachments that later will draw him there again with far-reaching consequences. That Paul was by no means an “apostate” from Judaism as was supposed at Jerusalem (cf. 21:21) is shown here. His conciliatory actions at Jerusalem are no more than what he himself would do on his own initiative.

However, a need becomes apparent to Paul at Ephesus. But first he retraced the steps led him to the borders of Asia earlier (cf. 15:40–16:6 with vv 22-23) and this time he is able to enter the territory unhindered and for the fullest blessing.

Life, as well as history, is so overruled by a controlling hand that its various repetitions and parallelisms are a proof of the sovereign control lying behind them.

18:24-28. Now a certain Jew named Apollos, born at Alexandria, an eloquent man and mighty in the Scriptures, came to Ephesus. A further striking evidence of sovereign “timing” is seen in the incident of Apollos. Everything in this section is a masterful interlocking of events.

It is clear that the ministry of Apollos at Ephesus had a preparatory value for Paul’s later ministry. It was not as developed as Paul’s teaching, but it was accurate, as well as fervent. While such a ministry can obviously have no place after the full Pauline revelation, it is a useful prelude to it. Like the ministry of John the Baptist himself, it has a preparatory character.

But just as Apollos was preparatory at Ephesus, so he is confirmatory at Corinth (vv 26-27). Between these two points he receives additional instruction from two believers (When Aquila and Priscilla heard him, they took him aside and explained to him the way of God more accurately) who had doubtless learned the most from Paul. Their presence in Ephesus at this time (cf. vv 18-19) is another point of the divine “timing.” Thus the Risen Lord sovereignly orders that Apollos’ ministry should precede Paul’s at Ephesus, and Paul’s should precede Apollos’ at Corinth, and that two humble believers, Aquila and Priscilla, should at the appropriate point bridge the gap. We are told (vv 27, 28) that Corinth was stronger for Apollos’ coming, and we do not doubt from what we subsequently see that Ephesus was a better field for Apollos’ having been there. Thus all is worked together by the Risen Lord of the Church.

We already begin to see that, great though Paul was as an instrument of divine service, his work can be continued by a sovereign Lord even when Paul is not present to do it. (The next section of Acts, 19:21ff, presents the removal of the Apostle from active missionary labors.) Here in 18:24-28 we see how simple believers whom Paul has trained can be used to perpetuate Pauline truth through gifted men other than Paul. We see how a greatly gifted man, helped by such believers, can then himself help others to whom the Apostle has ministered.

All this occurs, without Paul, under the direction of the Lord. Thus the truth advances totally apart from the direct efforts of one of its greatest instruments.

God is sovereign and His Word is not bound!