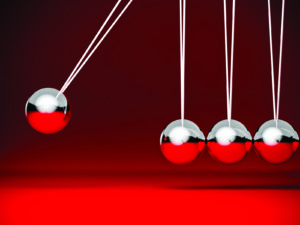 Paul tells us, “…there is none who seeks after God” (Rom 3:11), and Jesus said, “No one can come to Me unless the Father who sent me draws him…” (John 6:44). So at least this much is certain. If any do end up seeking God, He by some means aroused their heart (drew them) to do so.

We know from Scripture that God does direct hearts toward various causes (Prov 21:1). But when He directs peoples’ hearts and actions, is it in a direction consistent with their moral tendencies, or does God cause it to go in a direction that’s foreign to the basic nature of the person?

The answer can be seen in the hardening of Pharaoh’s heart. Pharaoh was characterized by obstinateness. He repeatedly hardened his own heart first (Exod 5:2; 7:14; 8:15). In hardening Pharaoh’s heart, God certainly did nothing that was contrary to Pharaoh’s own will or character.

Likewise, when God moved the heart of the King of Babylon to conquer Judah, was He moving him in a direction that was foreign to his basic nature or was God giving the king an opportunity to follow his own desire, so as to discipline wayward Israel? Likewise, did God force Judas to betray Jesus or did He merely furnish him with the opportunity to carry out the sort of predisposed evil that was part of his character? Certainly, it was the latter.

God Desires All Men to Be Saved

Paul tells us plainly that God “desires all men to be saved and to come to the knowledge of the truth” (1 Tim 2:3-4). If we take this verse at face value, the problem with people being restored to God is their own. God has the desire, knowledge, and resources to bring any and all to Himself, so if some don’t respond, it’s because they, with their own free will, choose not to.

If God writes our names in the Lamb’s Book of Life before we ever take our first breath (Rev 17:8),1 what could be His basis for doing so, since we’ve displayed no inclinations yet, or anything else?

God knows the end from the beginning. That is, He is not bound by time in the least. Thus, He need not wait for the actual outcome of events to know the outcome. This is what predictive prophecy is all about: stating the known outcome ahead of time.

God pre-records what, in His omniscience, He already knows is going to happen. This recording doesn’t cause the person to believe; it merely indicates in advance the fact that they will.

Responding to the Light

God reveals Himself to all enough to hold all accountable, but not in a way that ensures their faith or obedience. Quantity of light given alone is not the issue; but also the response to that light. If quantity of light was the issue, those with the most light would be the most responsive to God, and those with less, would be less responsive.

But this is not consistent with what we see in Scripture. For example:

“Then he said, ‘I beg you therefore, father, that you would send him to my father’s house, for I have five brothers, that he may testify to them, lest they also come to this place of torment.’ Abraham said to him, ‘They have Moses and the prophets; let them hear them.’ And he said, ‘No, father Abraham; but if one goes to them from the dead, they will repent.’ But he said to him, ‘If they do not hear Moses and the prophets, neither will they be persuaded though one rise from the dead’” (Luke 16:27-31).

Wouldn’t seeing a man risen from the dead be a very special revelation? Yet, it would have no more impact on the rich man’s brothers than God speaking to them through His Scriptures!

Light does not necessarily produce faith or obedience. How much light did Satan and the fallen angels have? How much light did Judas have, or the religious leaders who saw Jesus’ miracles? How much light did the Exodus generation have who couldn’t even trust God for the next drink or meal (Exod 15:24; 16:3)? Did Joshua and Caleb have more light than the other 2 ½ million? If not, why did only they (and the children under 20) make it to the Promised Land?

Is extra light the key to people (whether believers or unbelievers) responding properly to God, or is a willing heart more the key (“But you are not willing to come to Me [= believe in Me, compare John 6:35] that you may have life,” John 5:40)?

God Responds to Our Responses

Mark 4:24-25 shows that God deals with us according to our responses.

Consider carefully what you hear: with the measure you use, it will be measured back to you—and even more. Whoever has, will be given more; whoever does not have, even what he has will be taken away.

It appears that God takes us in the direction that we insist on going. If we choose wisdom, He gives us more. If we choose to lack wisdom, He allows even what we have to vanish! But as people respond to God’s initiatives, He continues to reveal Himself to them (John 14:21-23).

What happens to people as they reject God’s initiatives, or simply get lazy after initially responding well?

For though by this time you ought to be teachers, you need someone to teach you again the first principles of God’s word; you have come to require milk and not solid food. Those who partake only of milk are unskilled in the word of righteousness, for they are still babies. But solid food belongs only to the mature, who by reason of use have their senses trained to distinguish between good and evil (Heb 5:12-14, see also Matt 13:3-8, 18-23).

God will allow people to drift from growth and truth, even Christians, if they insist on doing so (though, He’ll ever be seeking to get them back on course, which includes using discipline Heb 12:5-7). God allowing Christians to drift is not the same thing as revoking their eternal life, for that remains intact regardless of future developments (John 4:13-14; 5:24; 6:35-40; 1 Cor 3:10-15).

What happens to those who simply never respond favorably to God’s initiatives, thus never are born again? The Apostle Paul said,

God seeks to lead all men in the way of truth, but if we insist on lies, He gives us over to them, which is a form of judgment. But if we’re responsive to truth, He blesses us with more truth (John 14:21-23).

Though we all choose good or evil, God is able to direct all actions toward His goals, which are only good. For example, God recorded in the Garden of Eden that the Lord Jesus would be killed for us (Gen 3:15). Satan and many wicked men were instrumental in killing the Christ (Luke 22:3-4). It was their own evil that motivated them. Yet, God uses the most wicked conspiracy in history to achieve the redemption of mankind. Now that’s sovereignty!

Whom He Wills He Hardens

One passage that is difficult for many to reconcile with free will is Rom 9:15-18:

To understand this, we must keep in mind that God has a basis in spiritual matters for choosing whether to reveal or conceal Himself, and that basis is our free will. He responds to us as we respond to Him. This fact is repeatedly stated in Romans (e.g., Rom 1:21-28). If we don’t pursue God, or if we pursue Him on our own terms rather than His, like the Jews of Romans 10, He will not extend mercy to us, but rather hardening and judgment. God wills to extend mercy to all who respond to Him with faith in Christ. He wills to harden those who reject Him.

Even in regard to earthly matters, all are not given equal opportunities. Some are rich, some poor; literate or illiterate; healthy or not; beautiful or not; slave or free; king or peasant. And yes, some are taught better, and have Christian love better modeled to them than others.

Yet God is just in righting these inequalities.

God knows all, loves all, and reaches out to all. He only waits for us to reach back to His extended arm of grace. To those who do, He shows them, usually through other people, their need for Christ and how to receive life through Him. Then, He continues to reach out to us and, as long as we are responsive to Him, He continues to reveal Himself to us and bless us. However, as folks reject Him and His truth, He eventually gives them the delusion that they insist upon, respecting their free will.

When we read that God moves people in certain directions so as to cause certain outcomes, we know that He doesn’t take them in a direction contrary to their basic character, but rather works within the confines of their free will. Thus, He didn’t cause Satan, or Judas, or the religious leaders to kill Jesus. He gave them opportunity to carry out their own wicked desires, yet for our good! God expresses His sovereignty by using our actions to achieve His purposes.

Ron Rosso lives in NJ and came to faith through Campus Crusade.