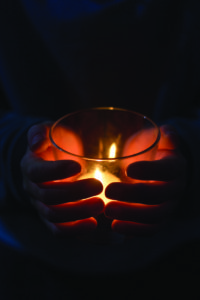 I’ve been a believer for many years, and God has always been faithful to show me that His grace truly is sufficient in times of trial.

When I stop and remember how He’s always come through for me in each and every trial, I am in awe of Him.

But this last big trial was the greatest of all. And I saw with my own eyes something so amazing that I am even more in awe of God!

My husband, Dale, became ill soon after he retired from his job as a CRNA (Certified Registered Nurse Anesthetist).

He was always a very active person who seldom just sat down. When I saw him just sitting, he was usually reading his Bible or preparing for a class. Usually he was working in the yard, working in his shop, riding his bike, working on a project at church, etc.

Soon after he completely retired he became ill. We didn’t know what was wrong. He continued to get worse and worse to the point where he couldn’t do any of the activities he always did. It was very hard not knowing what was wrong.

We continued to attend two more annual GES conferences after he was ill, although he wasn’t able to attend all the sessions at that last conference, which was 2012.

I had to do the driving which was about 6 1/2 hours each way. Within an hour or so after we got home from the last conference Dale complained of pains in his side and we ended up going to the ER the evening we got back. He had a gall bladder attack and was admitted to the hospital for surgery. Later Dale was diagnosed with Parkinson’s and then multiple blood clots in both lungs.

Our darkest days of suffering were still to come, and God was going to show us something so wonderful about Himself that we couldn’t have known any other way but to go through it.

About three months before he went home to be with the Lord, Dale was getting ready to come back to bed one evening, and I saw him about to fall backwards. I ran and grabbed him before he went all the way over. That was God’s provision because I wasn’t usually that close to him.

But once his legs went out from under him I didn’t have the strength to get him back to bed. Somehow I was able to drag him to the bed (even though I have no memory of how I did that). I ended up calling 911 and Dale was taken by ambulance to the hospital. After a few days they moved him to a rehab center, but I wanted to take care of him at home, and that’s what I did. I was his main care giver, but home health nurses came a few times a week to care for some of his medical needs.

God also provided a new friend to take care of Dale for four hours a day, five days a week so that I could get out and do the chores I needed to do. She was truly one of God’s mercies to us that are new every morning. It’s like she appeared out of nowhere just as we needed her and disappeared immediately after Dale’s memorial service. She was God’s perfect provision for us and we grew to love her.

Those last few months Dale could not get out of bed. It was something he never would have wanted. But God was there for both of us.

In the mornings I would begin with a musical tape. Normally I played the song, “Soon and Very Soon.” I would sing along with the tape, smiling and saying to Dale, “This Parkinson’s is a temporary affliction, and our future is so bright. We know what’s real. God’s promises are true!”

He would smile and say, “I like it when you say that.”

I needed to remember that for myself as much as he did.

We had arranged for Dale to be in a hospital bed in our bedroom. One night we were both asleep, and sometime in the middle of the night Dale started singing, “Jesus, Jesus, Jesus, sweetest name I know,” and then he stopped.

I lay there quietly, expecting him to fall back asleep, but then he yelled out, “Help me out.” He wanted me to sing that song with him. So as we both lay in our beds in the dark in the middle of the night together we sang, “Jesus, Jesus, Jesus, sweetest name I know. Fills my every longing, keeps me singing as I go!”

Then he started singing the doxology: “Praise God from whom all blessings flow,” and then he was quiet for a while, and I began to fall back asleep. But it didn’t last long. I noticed that Dale was mumbling or talking.

I couldn’t make it out. His voice was very soft. I quietly got up and put my ear down close to his mouth to see if I could make out what he was saying. It sounded like he was in a conversation with someone or praying. I wasn’t sure. Here are the words and phrases I was able to pick up, “Those are great, great words. Rejoice! Rejoice!”

I would leave his bedside and go into the kitchen and write down what I heard, then come back and see if I could understand more. I realized that he was having sweet communion with his Savior.

Next, I heard these words and quickly went to the kitchen again and wrote them down, “[It’s a] great experience to trust You, to know my eternal circumstance is all taken care of.”

He continued talking very quietly in his sleep and I went back to bed.

What caused me to be even more in awe of my God was the fact that in Dale’s darkest, most suffering days, God was there ministering to his inner man. Dale was having the sweetest communion with the One who loved him and died for him.

God was there just as He promised. He’s there for each one of His children.

He said He would never leave us or forsake us. I saw with my own eyes and heard with my own ears how God was present with him, and I will forever praise Him for giving me a glimpse of His presence in Dale’s deepest, darkest moments. God was there! His mercies truly are new every morning (Lam 3:22-24).