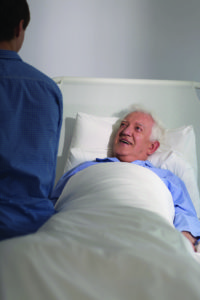 The Importance of Evangelism

Evangelism. So many give lip service to it, but fewer and fewer do the work.

Evangelism is giving the gift of the gospel to the unsaved.

Evangelism, like love, is something commanded of all Christians.

It has been defined in many ways.

Some define it as simply sharing the good news. Others describe it as one beggar telling another beggar where to get food. I’ve come to embrace evangelism as giving away the free gift!

At the church I pastor, I constantly emphasize that we should love Jesus while sharing His love with others. I often make myself available to my church members for going with them to any friend, neighbor, or co-worker who needs eternal salvation. I recently had an experience that I would like to share.

A church member called and requested prayer for a family member. The man had recently fallen and broken some bones. As doctors performed more tests, they found he had advanced cancer and had less than a month to live.

I asked about the state of the man’s soul. She said that he was not a churchgoer and had lived a “you name it, he done it” kind of lifestyle. However, since the recent diagnosis, he had become open to spiritual things and was even asking some questions. Would I mind going to speak to him?

As it happens, I had just read Bob Wilkin’s article “The Broken Record Approach to Evangelism.” Before embracing Free Grace Theology, my evangelism was complicated, coerced, and ineffective. Now I usually use John 6:47 as my main verse. I have it printed on a card and use it to walk a person through the free gift of salvation. Bob’s article reinforced that I was on the right track.

I walked into the hospice facility and introduced myself to the man. He was attempting to feed himself some food.

“I want to give you something,” I replied.

I spent the next thirty minutes or so simply getting to know him. I asked about his life, his family, and his church experience.

He shared his many regrets and mentioned confusion about heaven and how to get there. “I know I need to get it right, but what do I have to do?”

He mentioned the many pastors, chaplains, and evangelists he had talked to through the years. As recently as last year, one pastor determined that he simply needed to be baptized.

My new friend said he followed the rules, went under the water and right back out, but there was no change.

Shame on pastors who use souls to increase their statistics!

I told him that I would like to help clear these issues up for him. I told him that salvation is a free gift. I gave him a card with John 6:47 on it and asked him to read it. He did and replied, “That sounds pretty simple.”

He was concerned that he was not sure he could remember all the sins he had committed. He began to cry and talked about a teddy bear he had stolen forty-five years ago. He wept about past parties and foul languages.

I emphasized that salvation was a free gift.

I asked him if he believed John 6:47. He said he did. He said he finally understood that he did not have to do anything.

I could see the doubt melt from his heart.

We prayed, laughed, cried, and talked a little more. I asked him what salvation was and he said without hesitation, “A free gift!”

Then he drifted off to sleep.

The nurse said he couldn’t sleep before.

This was several days ago.

At the time of this writing, he has yet to wake up.

I am so thankful for the opportunity to give away the free gift of salvation. My new friend is now my new brother in Christ. He is saved.

He is not baptized.

He is not a church member.

He is not a theologian.

He is saved all because he believed the promise of Jesus in John 6:47.

Let’s get out there and give away the free gift!