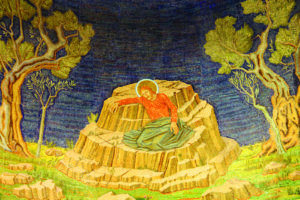 Many Christians find our Lord’s Gethsemane prayers perplexing, even downright troubling. Seemingly, Jesus tries to convince the Father into allowing Him to avoid crucifixion. How could that be?

The Cross Was Unavoidable

Jesus’ repeated predictions of the cross and resurrection—starting with John 2:19—prove that He knew that His death on the cross was unavoidable. Note Matt 12:39-40 and the following trio of predictions common to each synoptic.

Furthermore, in Matt 20:22-23 and Mark 10:38-39 the Lord used the imagery of drinking the cup as a metaphor for His upcoming crucifixion. Hence, this language anticipates His Gethsemane prayers.

Surely, He would not request avoiding crucifixion. It was one of the main reasons He came to earth. Yet, that is exactly how most interpreters approach Gethsemane—that Jesus was trying to get out of completing the task the Father gave Him to accomplish.

Let us consider Jesus’ first prayer as recorded in all three Synoptics:

“Abba, Father, all things are possible for You. Take this cup away from Me; nevertheless, not what I will, but what You will” (Mark 14:36).

The wording in Matthew and Luke uses conditional statements (“if it is possible” and “if it is Your will”), but both are first-class conditions. Thus, Matt 26:39 assumes as possible that the cup could pass from Him. Luke 22:42 assumes that it is the Father’s will to take the cup from Him. Mark 14:36 explicitly says that all things (even taking away the cup) are possible for the Father. Indeed, Jesus not only assumes that taking away the cup is possible, but that the Father’s will is to do exactly that.

Unfortunately, our finitude causes us to prematurely reject the right solution, because we imagine a difficulty that is really not present. Our imagined difficulty is as follows:

If it were possible to take the cup from Jesus, would not the cross become optional?

No, that is an imaginary conundrum. All we need is a little patience to consider Jesus’ second petition. There, He clarifies how and when the cup would be taken away.

Matthew 26:42 clarifies that Jesus expects the cup to be taken away after He drinks of it, not beforehand. While Jesus was in the Garden of Gethsemane, it was as if He were holding the cup, without yet drinking of it. When He went to the cross, He drank of it (as Matt 20:22-23 and Mark 10:38-39 use the imagery of drinking the cup for His crucifixion). Yes, it was the Father’s will to take away the cup, but only after Jesus went to the cross. In essence, we can understand the prayers in Gethsemane to say:

“Father, please let Me face the cross quickly, so that cup can be taken from Me in short order, but do all things on Your timetable, not Mine.”

This interpretation lines up nicely with John 12:27- 28a. Less than a week before His crucifixion (cf. John 12:1) Jesus asserts that He would not ask to be spared from the hour.

“Now My soul is troubled, and what shall I say—‘Father, save Me from this hour’? But for this reason I have come to this hour. Father, glorify Your name!”

The common understanding of Jesus’ Gethsemane prayers disagrees with what He says in John 12:27-28a. We should, instead, understand Jesus to request being allowed to drink the cup as soon as possible. Yes, indeed, the Father did remove the cup quickly. Within a matter of hours Jesus was arrested, tried, convicted, crucified, and buried. The following Sunday morning He then rose from the grave triumphantly. As Hebrews 12:2 says:

“for the joy that was set before Him, He endured the cross, disregarding the shame, and has sat down at the right hand of the throne of God.”

1. All translations are by the author.