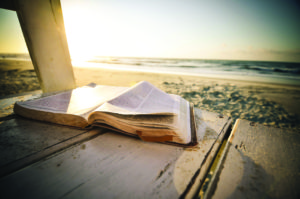 By Wayne A. Brindle

What if you were debating someone about the merits of home schooling, and your opponent said, “Home schools are bad, because, as the Oxford English Dictionary defines ‘school,’ it’s a ‘group of people gambling together,’ and we certainly don’t want our children to do that.”

What would your response be?

Mine would be “What?”

But sure enough, when I whip out my handy copy of the OED, there it is among the definitions: an infrequent British usage—a school is “a group of people gambling together.”

So where does our debate go from here? Answer: nowhere. Our opponent has illegitimately changed the meaning of one of the most significant terms of the debate.

This is what has recently been happening in the theological discussion of the meaning of “faith in Christ.”

Opponents of the free grace of God have decided that “faith” cannot mean simply “faith” or “belief.” It must include some kind of obedient activity and be translated as “faithfulness” or “fidelity” or, most recently, “allegiance.”1

Recently Bob Wilkin debated Matthew Bates concerning the latter’s new book, Salvation by Allegiance Alone2, in which Bates claims that most Christians have misunderstood the meaning of “saving faith.” During the debate, Bates made a number of Biblical and historical assertions that were, in my opinion, either totally misguided or misapplied toward erroneous conclusions. I’ll discuss the three most significant ones here.

First, the best Greek lexicon says that the noun pistis (“faith”) can mean allegiance, fidelity, or loyalty; therefore, when the NT says that salvation is by faith, it includes “faithfulness” or “allegiance” to Christ.

Second, we need to look at Greco-Roman texts (outside the NT) in order to define NT words because there are many words that occur in the NT only a few times. When we do that, we discover that ancient Greco-Roman literature has many examples of this “loyalty” meaning of pistis.

All of these assertions ignore the best Biblical and lexical evidence, and are examples of bad exegesis. Let’s look at each of them in order.

BDAG, considered the best Greek lexicon for NT scholarly study, gives three basic categories of meanings for pistis: (1) “that which evokes trust and faith,” such as “faithfulness” and “fidelity” (it cites six NT passages with this specific meaning); (2) “believing on the basis of the reliability of the one trusted,” meaning “trust” or “confidence” or “faith” (more than 180 NT passages are cited with this meaning, almost all of which refer to faith in God, Christ, the Gospel, or God’s promises—this is by far the dominant meaning of pistis in the NT according to BDAG); and (3) “that which is believed”—the body of faith or belief (thirteen passages are cited with this meaning).

Exegetes often come to Biblical texts with a set of theological presuppositions that drive their exegesis, with the result that “if there is an available meaning for a word that better serves the researcher’s own theological paradigm, that person favors the more obscure definition over the common definition.”3 In the case of pistis, any occurrence in the NT can theoretically have any one of the above three meanings. But the burden of proof would appear to be on the interpreter to demonstrate how the specific context would make the common definition unlikely. There are very few instances in which Bates can show this for pistis.

Sometimes interpreters suggest that the first definition given in a lexicon must be the preferred or most important one. Bates implies that since “faithfulness” is the first meaning given for pistis in BDAG, it should be taken as the most pervasive meaning. But this is not the case at all. In BDAG, the first listing is generally the meaning that is most similar to the meaning used in ancient or classical Greek. For an example of this, look at the word ekklesia. Three basic meanings are given: (1) legislative body/assembly; (2) gathering of people; and (3) congregation/church. One NT occurrence is cited for the first listing (Acts 19:39); two are given for the second listing (Acts 19:32, 40); and about 110 for the third (mainly “church”).

So if you meet the word ekklesia in the Greek text and wonder which meaning is most likely (if all fit the context), which would you choose?

The order of presentation in BDAG has nothing to do with the “most likely” or “preferred” meaning in any particular passage. There are more than 180 references in the NT to “salvation by pistis (faith),” and none of them refer to “faithfulness” on the part of the believer.

Bates says that we need to look at Greco-Roman texts (outside the NT) in order to define NT words because there are many words that occur in the NT only a few times. The only way we can discover what those words mean is by looking outside the NT.

However, the word pistis is not one of the words that occurs only a few times in the NT. It appears 243 times, from Matthew to Revelation, in so many different contexts that scholars and translators have never had a problem translating it.

Bates says that the literature of the ancient Greco-Roman world has many examples of the “loyalty” meaning of pistis. First Maccabees 10:27 quotes King Demetrius as saying, “Continue still to keep pistis (loyalty) with us and we will repay you with good for what you do for us.”

However, BDAG gives almost as many examples from this literature with the meaning “faith” or “trust” as it does with “loyalty” or “faithfulness.”

The “loyalty” examples tend to be mostly from texts that pre-date the NT (from classical Greek and the LXX), but the examples cited with the meaning “faith” are mostly from Josephus, Philo, and the time period of the NT and the early church. This probably indicates that the predominant meaning of pistis gradually changed from ancient Greek to NT Greek, which may explain why its use in the NT reflects almost entirely the “faith/trust” emphasis.

In the LXX (an early Greek translation of the OT), which was composed from about 250 BC to 130 BC, the word pistis appears 59 times. It carries the meaning “faithfulness” or “fidelity” in less than half (44%) of these occurrences. Eight times (14%) it definitely has the meaning “faith,” another eight times (14%) the meaning could go either way, and seventeen times (29%) the term has to be translated in a different way entirely. The use of pistis in the LXX illustrates the change of meaning that was going on in early Koine Greek, and by the time of its NT usage the focus on the concept of “faith” or “trust” was almost complete.

Both of these statements are false.

Of the five passages specifically mentioned by Bates, only three are translated by almost all recent versions as “faithfulness” or “fidelity”: Rom 3:3, Gal 5:22, and Titus 2:10. The Romans passage speaks of the “faithfulness of God” (God’s “faith” wouldn’t fit the context). The Galatians passage speaks of pistis as a fruit of the Holy Spirit, among which “faithfulness” makes good sense (the KJV has “faith,” which also makes sense). Titus 2:10 says that slaves should “show all good fidelity” or “faithfulness,” which certainly fits the context; many recent translations have “showing all good faith,” which has a related idea. In Matt 23:23 Jesus tells the scribes and Pharisees that they have neglected justice, mercy, and pistis. Only about half of the best recent translations use the word “faithfulness” or the equivalent here. And only one major contemporary translation uses something other than “faith” in 2 Thess 1:4. Bates’s use of this passage is thus counterproductive to his case.

To get an understanding of how far from the truth Bates’s claims on this subject have gone, let’s take a quick look at what are probably the top eight recent Bible translations, and how they translate the word pistis. I will list how many times, out of 243 total occurrences, each version translates pistis as “faith”: ESV=238, NASB=237, NKJV=237, HCSB=233, RS=237, NRSV=232, NET=228, NIV=226. The percentages for these translations range from 98% of the total (ESV) to 93% (NIV).4

The average percentage of translation of pistis by “faith” among these top eight versions is 96%.

Clearly there is no way one can reasonably claim that pistis in the NT regularly means “faithfulness, not faith.” It does so in very few contexts, but that’s all. The context must drive the translation and interpretation in every occurrence. And NT translators have consistently rendered pistis as “faith” throughout the NT in almost every instance.

Bates claims that pistis should be thought of as “embodied action,” not an “interior disposition” (as in trust or persuasion or faith). Therefore, he says, justification is actually by works. This, of course, would have been strange news to the Apostle Paul, who argued against works-salvation at every opportunity (see Rom 3:28; 4:5; 5:1; Gal 2:16; 3:24; Eph 1:13; 2:8-9; Phil 3:9). It also runs completely counter to the Gospel of John, in which the Greek verb pisteuō (believe) always means to believe or trust in or have the conviction that something is true. Passages like John 3:16, 11:25-27, and 20:30-31 make it clear that both Jesus and John taught salvation by faith alone and not by works.

Wayne A. Brindle is retired Professor of Biblical Studies at Liberty University, Lynchburg, Virginia. He has a Th.M. and Th.D. from Dallas Theological Seminary.

1. Lordship Salvation asserts that one must “believe in Christ” AND “follow Him as Lord” in order to be saved; this “allegiance” view says that having faith in Christ means to be faithful and loyal to Him.

4. In the case of the NIV, the lower percentage is due to the fact that in six occurrences of pistis, the NIV translates it verbally as “believe” or “believing” or “those who believe” (the same idea as “faith”—not “faithfulness”); if these were added in, the NIV’s percentage would be 95.5%.