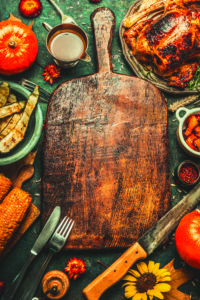 Here’s an illustration from the Old Testament, from 2 Samuel 9.

Jonathan, son of Saul, was King David’s best friend. After Jonathan died, David wanted to show kindness to someone in Jonathan’s family:

“Is there still anyone who is left of the house of Saul, that I may show him kindness for Jonathan’s sake?” (v 1)

It turns out Jonathan had a son named Mephibosheth who was lame in both feet. David sent for him.

Mephibosheth didn’t think very much of himself. He compared himself to a “dead dog” (v 8). After all, he was the crippled grandson of a failed king—two strikes against him.

And maybe that was a fair evaluation. But David had no intention of being fair. Instead, he wanted to show grace—favor that Mephibosheth did not deserve, but which was earned by another:

“Do not fear, for I will surely show you kindness for Jonathan your father’s sake…” (v 7).

When the king summoned him, Mephibosheth must have feared the worst. He would not have imagined the grace coming his way:

Eating at the king’s table forever.

What a wonderful illustration of God’s grace to you in salvation!

You may be lame in both feet and come from a checkered family. But God shows you kindness, for Jesus’ sake. He gives you eternal life and adopts you as a son (John 1:12). He invites you to eat with Him forever.