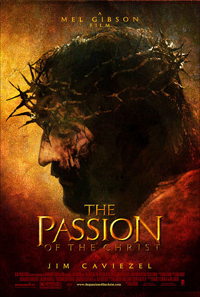 Mel Gibson’s motion picture “The Passion of the Christ” is one of the most highly anticipated and controversial films of our time. No matter what opinion you hold about it, no one can deny that it has everyone talking.1 For better or worse, it will most likely generate more worldwide attention for Christ than we have seen in a long time.

This 25 million dollar two-hour film premiered and paid for itself on Ash Wednesday, February 25th. It quickly became the highest grossing five day opening ever with $125.2 million in sales (beating the recently released “The Return of the King”).

The purpose of the film is to reenact the last twelve hours of Jesus’ earthly life. Therefore, it begins in the Garden of Gethsemane and ends with Jesus’ burial (with about two seconds of His resurrection). The dialogue consists of two dead languages: Latin (Romans) and Aramaic (Jews). Gibson’s desire is that through subtitles, Christ’s Passion would transcend language barriers. Thus, the film can easily be translated into hundreds of languages.

Although Gibson drew much of his inspiration from the four Gospels, he was also affected by the Catholic mystic Anne Catherine Emmerich,2 whose visions of the Passion are recorded in her diary and were later compiled into a book: The Dolorous Passion of Our Lord Jesus Christ. While no one can deny that Gibson afforded himself cinematic-license, due in part to his extra-Biblical influence,3 for the most part, the movie remains biblically accurate.

Gibson holds to a Pre-Vatican II (traditionalist) Catholic belief most popular until the 1960’s. Thus, although the movie was inspired by the four Gospels and Emmerich, the Fourteen Stations of the Cross were Gibson’s ultimate focus. These fourteen stations include: 1) Condemnation; 2) The cross; 3) First fall; 4) Jesus meets Mary; 5) Helped by Simon; 6) Veronica wipes His face; 7) Second fall; 8) Speaks to the women of Jerusalem; 9) Third fall; 10) Stripped of garments; 11) Nailed to the cross; 12) Dies; 13) Taken down; and 14) Buried. These fourteen stations serve as the outline (plus a short introduction, flash backs, and resurrection) to this film.

In an age where shock value has flooded the media, “The Passion” does not deviate. It is riddled with graphic footage that would make even a skeptic leave the theater in sheer awe. No one in the crowd (from the disaffected teenager to the weak-in-stomach) could possibly sit unaffected as they watch the true-to-life beatings where the very skin is raked from Jesus’ body.

In one intensely emotional scene Jesus falls before His mother Mary while carrying the cross. Instantly, the film flashes back to a scene where the young Jesus falls to the ground before Mary. Horrified, she immediately rushes to His side. Likewise, while bearing the cross, in His darkest hour, His mother remains by His side. He is not only her Savior, but her beloved son.

I sat in awe for two hours straight. When the film ended, all I wanted was to be left alone to process what I had just seen.

While the film’s Catholic influence cannot be ignored, it does indeed offer great opportunity for us as Christians. Most assuredly, in reaction to unavoidable criticism that “The Passion” will receive, many will quote Paul’s words “What then? Only that in every way, whether in pretense or in truth, Christ is preached; and in this I rejoice, yes, and will rejoice” (Philippians 1:18). Yet, may we also remember that the bridge this film builds between here and eternity leaves the viewer one step short of glory. While the film does quote John 14:6, nowhere else can the good news of Christ be found—that Christ justifies all who simply believe in Him. The film upholds the cross, the means of our justification, yet never explains how one may be justified. While this film will afford us great opportunities to share the good news, we must not assume that the movie alone will convey what one must believe in order to be eternally saved.

Many Evangelicals have embraced Mel Gibson as a fellow believer. Yet, this quote from his Feb 17th interview with Diane Sawyer on ABC’s Primetime is disturbing to say the least:

DS: “So, when we talked with Gibson and his actors we wondered, ‘Does his traditionalist view bar the door to Heaven for Jews, Protestants, Muslims?”

MG: “That’s not the case at all. Absolutely not. It is possible for people who are not even Christian to get into the Kingdom of Heaven. It’s just easier for—and I have to say this because this is what I believe.”

DS: “You have the non-stop ticket.”

MG: “It’s like, uh well, yeah, I am saying it’s an easier ride where I am because—I have to believe that.”

While Catholics, Orthodox, and Protestants alike love and adore the cross, we must remember that love for the cross is not enough. Jesus Christ promises eternal life to all who simply believe in Him for it. May we continue to preach Christ to a world that is in dire need of knowing Him.

2. One of many clear direct references to Emmerich’s diary is a scene which shows Pilate’s wife bringing linens to Mary. Emmerich writes, “When Jesus fell down at the foot of the pillar, after the flagellation, I saw Claudia Procles, the wife of Pilate, send some large pieces of linen to the Mother of God. I know not whether she thought that Jesus would be set free, and that his Mother would then require linen to dress his wounds, or whether this compassionate lady was aware of the use which would be made of her present…I soon after saw Mary and Magdalen approach the pillar where Jesus had been scourged;…they knelt down on the ground near the pillar, and wiped up the sacred blood with the linen which Claudia Procles had sent.” See “Mary During the Flagellation of our Lord,” Chapter XXIII.

3. Although Emmerich’s sainthood was stalled in 1928 many continue to fight for her—including German bishops. They worried that her literary licenses were inaccurate. They include: Long, sharp nails whose points came through at the back of the cross, greater detail of Jesus’ final hours, the devil’s appearance in the Garden of Gethsemane, Pilate’s conversation with his wife, the devil moving through the crowd as Jesus is sentenced, the devil whispering to Judas, and hairstyles which reflect medieval German art more than Biblical Antiquity. See also fn. 2. All of these are included in “The Passion,” but not the Bible.