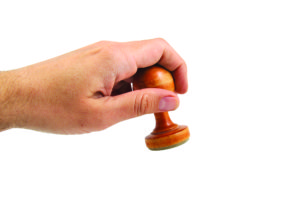 The Greek word typos, from which our English word “type” derives, is an interesting term. Typos comes from a root which means “to strike,” and thus the Greeks used the word to denote an impression made by a blow in wax or metal. They also used typos to refer to a form, an imprint, an image, a footprint, a model to be imitated, an example or pattern. The typewriter got its name because the user strikes a key which in turn strikes an ink ribbon which leaves an impression on a sheet of paper.

Note how we, like the Greeks, use these concepts not just literally, but metaphorically as well. We may say, for example, “Sally strikes me as friendly. Her sunny nature impresses others.” We believers should strive both to model behavior which pleases God and to strike others with the right impression. In other words, we should set a good example to other believers and to the world.

The word typos is often used in the NT and is frequently translated as “example” (“ensample” in the KJV). Let’s look at a short list of verses containing the word typos; we will see why it is so important that our lives impress people the right way and that we follow in the footprints of Our Lord. What we do matters; great rewards are at stake.

The NT writers use typos in both a negative and positive sense. For example, the Apostle Paul uses it in a negative sense in a warning to the Corinthian believers:

The consequences of sinful behavior in a believer’s life, according to this passage, are far reaching and can be experienced in the here and now. We know from other passages, such as 1 Cor 3:10-15, that behavior not pleasing to the Lord results in serious loss of reward in the life to come.

In his epistle to the Philippians, the Apostle Paul exhorts all believers to strive for reward and to follow his example in godly living:

“Not that I have already attained, or am already perfected; but I press on, that I may lay hold of that for which Christ Jesus has also laid hold of me. Brethren, I do not count myself to have apprehended; but one thing I do, forgetting those things which are behind and reaching forward to those things which are ahead, I press toward the goal for the prize of the upward call of God in Christ Jesus. Therefore let us, as many as are mature, have this mind; and if in anything you think otherwise, God will reveal even this to you. Nevertheless, to the degree that we have already attained, let us walk by the same rule, let us be of the same mind. Brethren, join in following my example, and note those who so walk, as you have us for a pattern [typos]” (Phil 3:12-17, emphasis added).

The Apostle Paul defines what is included in setting a godly example for others: “in all things showing yourself to be a pattern [typos] of good works; in doctrine showing integrity, reverence, incorruptibility, sound speech that cannot be condemned, that one who is an opponent may be ashamed, having nothing evil to say of you” (Titus 2:7-8).

Not just individuals are responsible to set an example, but entire congregations are exhorted to do such: “so that you became examples [typos] to all in Macedonia and Achaia who believe” (1 Thess 1:7).

The Apostle Peter specifically addresses church elders and the necessity that they in particular model behavior that pleases the Lord: “nor as being lords over those entrusted to you, but being examples [typoi] to the flock; and when the Chief Shepherd appears, you will receive the crown of glory that does not fade away” (1 Pet 5:3-4) There is a special reward for church elders who faithfully and responsibly lead the people of God.

When Charles Barkley played in the NBA, he famously said more than once that he was not a role model. In reality, though, he was, whether he wanted to be or not.

Likewise, every single Christian is an example to others, both believers and unbelievers, whether he realizes it or not.

The question is, will we be a good example, a good role model for others? Will we be faithful to follow in the footsteps of Jesus? Will our lives strike people with a favorable impression? If yes, then we will gain full reward at the Bema and will rule with Christ in the next life. That is good motivation. Let us type well, friends.